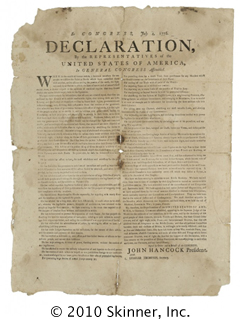 Sunday, November 14, 2010 — Today the Boston auction house of Skinner, Inc. will sell to the highest bidder an original copy of the Declaration of Independence, printed in Exeter, New Hampshire in 1776 by Robert Luist Fowle.

The public sale of a copy of the Declaration from one of the fourteen original printings is an exceedingly rare event. Of the 100 or so that have survived, nearly all are in libraries, museums, or other institutions.*

According to Skinner’s catalog, this copy “[d]escended in a New Hampshire family, whose relative, a judge, likely received this document in his official capacity. The water stain occurred in connection to a fire. Thankfully, this rare and important document was saved for posterity. These early broadside printings of the Declaration, arguably one of the most famous documents ever conceived, represent the spark that finally ignited the smoldering powder keg of colonial resentment and desire for independence that led to the Revolutionary War. There are few documents still in existence that so summarily changed the course of modern history. Due to the transient nature of paper, and the heavy handling these broadsides would have received, according to the most recent data there are believed to be fewer than 103 of any date still known to exist. This lot is only the sixth known of this printing ….”

We lavish space on this story partly because of its intrinsic interest and partly because it gives us an excuse to tell, once again, the story of the man who printed it, Robert Luist Fowle.

Robert Luist Fowle (1743 – 1802?) was a nephew and apprentice of Daniel Fowle, the founder of this newspaper. Robert became Daniel’s business partner in 1764, an arrangement that continued for about ten years, after which Robert moved to Exeter where he established his own print shop. The two parted ways over political differences.

Less than a year after he printed the Declaration, New Hampshire’s Revolutionary government asked Robert to print its currency. He may have been the low bidder, but he was not the best choice. A secret Tory himself, Robert conspired with Dr. Silas Hedges and others opposed to the Revolution to create and distribute a quantity of counterfeit currency — an act of economic sabotage. †

“The counterfeiting [of] our Paper currency,” the Committee of Safety recorded on May 8th, 1777, “is one of the many Diabolical Schemes mediated by our enemies to perplex & weaken the Country … Robert Luist Fowle was apprehended & committed to Goal [jail] and no person suffered to speak with him but the Committee.”

Exeter historian Charles H. Bell, Esq., in his History of the Town of Exeter (1888), relates what happened next. “[Fowle] had the effrontery then to propose to the committee that in case they would screen him from punishment, he would confess what he knew … The committee took him at his word, and he made disclosures … In return for his revelations the authorities were to allow him his liberties on bail. Whether it was that no one cared to be his surety [i.e., put up bail money] is not known, but he remained in jail until he took ‘leg bail,’ and escaped to the British lines.”

Robert went to England and stayed until the Treaty of Paris. Then, speaking of effrontery, he returned to New Hampshire. Sustained by a British pension, he married the widow of his younger brother Zecharaiah, and lived out the rest of his days in Brentwood. Isaiah Thomas, America’s first historian of printing, who probably knew him personally, wrote wryly “[he] had very respectable connections.”

The press on which Robert printed the Declaration is on display at the Exeter Historical Society. Built in England around 1740, it is one of only a handful of 18th century wooden common presses known to exist in this country. The Exeter Historical Society is located at 47 Front Street and is open to the public on Tuesdays and Thursdays from 2 to 4:30 p.m. and Saturdays from 9:30 a.m. to noon. For more information call (603) 778-2335.

* The first printing of the Declaration was done in Philadelphia the night of July 4th by John Dunlap, official printer of the Continental Congress. A copy of the Dunlap Broadside was discovered in 1968, in a previously overlooked crate found in a bookstore that was about to close. It was sold to a private party, Ira G. Corn, Jr., in 1969, for $404,000 ($2,337,660 in today’s money). The document is now on display at the Dallas Public Library.

† Robert Luist Fowle, first child of John Fowle, Daniel Fowle’s eldest brother, did not fall far from the tree. Though educated at Harvard (Class of 1732), John’s career was less than stellar. Dismissed as Pastor of the Church of Christ in Hingham in 1746 “because of mental derangement,” he was later assigned by the Society for the Propagation of the Gospel in Foreign Parts to St. Paul’s Episcopal Church in Norwalk, Connecticut. John was dismissed from that position in 1756 for selling the mission library. He is thought to have gambled away the money. By 1761, John was reduced to working as a scrivener in Portsmouth. He later returned to Boston, where he was imprisoned for debt and died in jail.