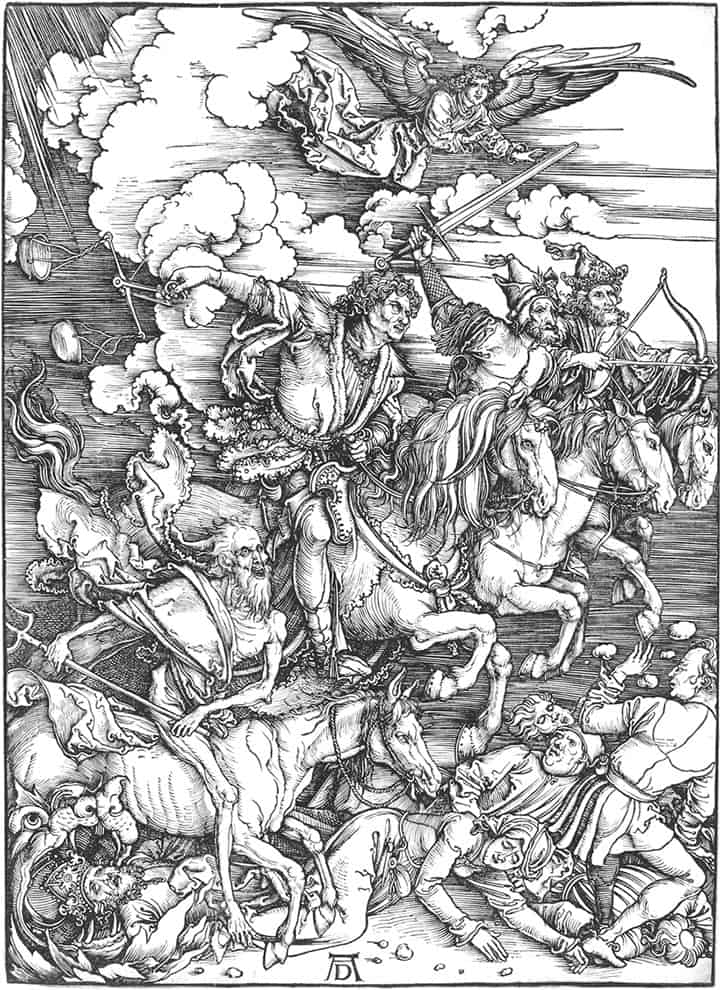 Recently, while taking a virtual tour of New York’s Metropolitan Museum of Art, I came across an image of Albrecht Durer’s 1498 woodcut, “The Four Horsemen of the Apocalypse.” This woodcut was one of 15 that Durer produced for a book illustrating the Bible’s “Revelation to John,” and the image powerfully represents scripture’s Four Horsemen: conquest, war and violence, famine, and death. Earlier artists tended to represent each horseman separately, but Durer chose to present them together, galloping fiercely across a visual field.

Durer created the image more than 500 years ago, yet it continues to startle, displaying the horsemen’s combined energies and inspiring thought about the collective energies of our own apocalyptic horsemen: economic oppression, racism, environmental injustice, and militarism.

Helping us imagine the horseman of economic oppression, Durer (and the author of the Book of Revelation) lends a symbol to our present day. His horseman representing famine carries a scale indicating exorbitant food costs and economic breakdown.

Today’s horseman of economic oppression trails clouds of suffering, images of desperation: food insecurity increasing dramatically since the onset of the pandemic, long lines of people waiting at food banks, and mothers with children reporting that their kids don’t have enough to eat (one in five mothers today, according to recent surveys). We see millions of people with no health insurance in the midst of a pandemic (up to 27 million losing employer-based insurance, with about six million of those people expected to be ineligible for subsidized backup insurance).

The horseman’s demeanor evinces stone-like indifference and intransigence. We see these qualities exuded by an administration resisting efforts to provide long-term expansion of a successful food stamp program, portraying it as a backdoor opening to the welfare state. Those same stone-like qualities permeate continuing efforts to rule the Affordable Care Act unconstitutional, as well as to prevent the extension of unemployment benefits (“over our dead bodies,” according to one Congressional ally of the President).

Meanwhile, one recalls the massive 2017 tax cuts for the wealthy and for corporations—while occasionally catching glimpses of financial dealings of the ultra-rich (e.g. multimillion dollar homes still being sold and bought in the wealthy enclaves of Los Angeles). The horseman of economic injustice did not originate with this administration, but he helped bring it into being, and he now rides ever more emboldened by it.

The second rider, the horseman of racism, has also been around a long time, multiplying the effects of economic oppression and drawing strength from that oppression. In his wake, the wake of the current pandemic, one sees the gaps and biases of our health care system, gaps and biases bringing grief to thousands of African-American families and other people of color across the country.

This horseman has a particular power. He rides with the time-tested strategy of the race-divider’s playbook, using fear and scapegoating to weaken resistance to economic oppression. The current administration channels this energy in a particular way, estranging and criminalizing the migrant, linking him to disease, caging him in for-profit prisons that leave few or no exits from infection and death.

The third rider, the horseman of environmental injustice, links up with his fellow riders by discerning and exploiting places of vulnerability: poor communities and communities of color that endure pollution from chemical plants, port facilities, refineries, mines, and highways. He becomes increasingly visible as the dots are connected between pollution and susceptibility to the coronavirus—the dots connecting to asthma, heart and lung disease, and cancer.

This horseman, too, is channeled by special interests. These are the interests, the corporations and their front institutes, that equate environmental regulations with infringements on “rights” and “liberty.” The horseman’s weapon is propaganda and the money that sustains it.

Finally, there is the horseman of militarism. He rides along the pathways and channels linking the sectors of the military-industrial-complex: the corporations, the lobbyists, the government agencies. Questions about him are being voiced with increasing intensity, e.g. what kind of “national security” are we buying with a $750 billion defense budget as the nation’s death toll rises above that of the last several wars? But amidst the questioning, the lobbyists still keep their busy pace, touting new weapons and systems of destruction.

There are traditions of interpretation that represent scripture’s four horsemen as portending final judgment and the end of days. There are people today who view the global pandemic and our environmental crises in just such terms. But the current four horsemen can also be seen in another light: as figures looming on a horizon of change. Despite the chaos, destruction, and death they sow, they are not invincible. They can be named, and naming is one form of power over them. They can be described precisely in relation to one another and that, too, is a form of power. As one era transitions uncertainly to another, these figures can be faced with courage and creativity—the creativity of artists, activists, and visionaries.