By John Buchanan and Stacey Michael 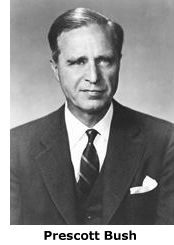 After the seizures in late 1942 of five U.S. enterprises he managed on behalf of Nazi industrialist Fritz Thyssen, Prescott Bush, the grandfather of President George W. Bush, failed to divest himself of more than a dozen “enemy national” relationships that continued until as late as 1951, newly-discovered U.S. government documents reveal.

Furthermore, the records show that Bush and his colleagues routinely attempted to conceal their activities from government investigators.

The White House did not return phone calls seeking comment.

Although the additional seizures under the Trading with the Enemy Act did not take place until after the war, documents from The National Archives and Library of Congress confirm that Bush and his partners continued their Nazi dealings unabated. These activities included a financial relationship with the German city of Hanover and several industrial concerns. They went undetected by investigators until after World War Two.

At the same time Bush and the Harrimans were profiting from their Nazi partnerships, W. Averell Harriman was serving as President Franklin Delano Roosevelt’s personal emissary to the United Kingdom during the toughest years of the war. On October 28, 1942, the same day two key Bush-Harriman-run businesses were being seized by the U.S. government, Harriman was meeting in London with Field Marshall Smuts to discuss the war effort.

While Harriman was concealing his Nazi relationships from his government colleagues, Cornelius Livense, the top executive of the interlocking German concerns held under the corporate umbrella of Union Banking Corporation (UBC), repeatedly tried to mislead investigators, and was sometimes supported in his subterfuge by Brown Brothers Harriman.

All of the assets of UBC and its related businesses belonged to Thyssen-controlled enterprises, including his Bank voor Handel en Scheepvaart in Rotterdam, the documents state.

Nevertheless, Livense, president of UBC, claimed to have no knowledge of such a relationship. “Strangely enough, (Livense) claims he does not know the actual ownership of the company,” states a government report.

H.D Pennington, manager of Brown Brothers Harriman and a director of UBC “for many years,” also lied to investigators about the secret and well-concealed relationship with Thyssen’s Dutch bank, according to the documents.

Investigators later reported that the company was “wholly owned” by Thyssen’s Dutch bank.

Despite such ongoing subterfuge, U.S. investigators were able to show that “a careful examination of UBC’s general ledger, cash books and journals from 1919 until the present date clearly establish that the principal and practically only source of funds has been Bank voor Handel en Scheepvaart.”

In yet another attempt to mislead investigators, Livense said that $240,000 in banknotes in a safe deposit box at Underwriters Trust Co. in New York had been given to him by another UBC-Thyssen associate, H.J. Kouwenhoven, managing director of Thyssen’s Dutch bank and a director of the August Thyssen Bank in Berlin. August Thyssen was Fritz’s father.

The government report shows that Livense first neglected to report the $240,000, then claimed that it had been given to him as a gift by Kouwenhoven. However, by the time Livense filed a financial disclosure with U.S. officials, he changed his story again and reported the sum as a debt rather than a cash holding.

In yet another attempt to deceive the governments of both the U.S. and Canada, Livense and his partners misreported the facts about the sale of a Canadian Nazi front enterprise, La Cooperative Catholique des Consommateurs de Combustible, which imported German coal into Canada via the web of Thyssen-controlled U.S. businesses.

After the war, a total of 18 additional Brown Brothers Harriman and UBC-related client assets were seized under The Trading with the Enemy Act, including several that showed the continuation of a relationship with the Thyssen family after the initial 1942 seizures.

The records also show that Bush and the Harrimans conducted business after the war with related concerns doing business in or moving assets into Switzerland, Panama, Argentina and Brazil – all critical outposts for the flight of Nazi capital after Germany’s surrender in 1945. Fritz Thyssen died in Argentina in 1951.

One of the final seizures, in October 1950, concerned the U.S. assets of a Nazi baroness named Theresia Maria Ida Beneditka Huberta Stanislava Martina von Schwarzenberg, who also used two shorter aliases. Brown Brothers Harriman, where Prescott Bush and the Harrimans were partners, attempted to convince government investigators that the baroness had been a victim of Nazi persecution and therefore should be allowed to maintain her assets.

“It appears, rather, that the subject was a member of the Nazi party,” government investigators concluded.

At the same time the last Brown Brothers Harriman client assets were seized, Prescott Bush announced his Senate campaign that led to his election in 1952.

In 1943, six months after the seizure of UBC and its related companies, a government investigator noted in a Treasury Department memo dated April 8, 1943 that the FBI had inquired about the status of any investigation into Bush and the Harrimans.

“I gave ‘a memorandum’ which did not say anything about the American officers of subject,” the investigator wrote. “(Another investigator) wanted to know whether any specific action had been taken by us with respect to them.”

No further action beyond the initial seizures was ever taken, and the newly-confirmed records went unseen by the American people for six decades.

What Does It All Mean?

So why are the documents relevant today?

“The story of Prescott Bush and Brown Brothers Harriman is an introduction to the real history of our country,” says L.A. art book publisher and historian Edward Boswell. “It exposes the money-making motives behind our foreign policies, dating back a full century. The ability of Prescott Bush and the Harrimans to bury their checkered pasts also reveals a collusion between Wall Street and the media that exists to this day.”

Sheldon Drobny, a Chicago entrepreneur and philanthropist who will soon launch a liberal talk radio network, says the importance of the new documents is that they prove a long pattern of Bush family war profiteering that continues today via George H.W. Bush’s intimate relationship with the Saudi royal family and the bin Ladens, conducted via the super-secret Carlyle Group, whose senior advisers include former U.S. Secretary of State James A. Baker III.

Lawrence Lader, an abortion rights activist and the author of more than 40 books, says “the relevance lies with the fact that the sitting President of the United States would lead the nation to war based on lies and against the wishes of the rest of the world.” Lader and others draw comparisons between President Bush’s invasion of Iraq and Hitler’s occupation of Poland in 1939 – the event that sparked World War Two.

However, others see an even larger significance.

“The discovery of the Bush-Nazi documents raises new questions about the role of Prescott Bush and his influential business partners in the secret emigration of Nazi war criminals, which allowed them to escape justice in Germany,” says Bob Fertik, co-founder of Democrats.com and an amateur ‘Nazi hunter.’ “It also raises questions about the importance of Nazi recruits to the CIA in its early years, in what was called Operation Paperclip, and Prescott Bush’s role in that dark operation.”

Fertik and others, including former Justice Department Nazi war crimes prosecutor John Loftus, a Constitutional attorney in Miami, and a former Veterans Administration official, believe Prescott Bush and the Harrimans should have been tried for treason.

Now, say Fertik and Loftus, there should be a Congressional investigation into the Bush family’s Nazi past and its concealment from the American people for 60 years.

“The American people have a right to know, in detail, about this hidden chapter of our history,” says Loftus, author of The Secret War Against the Jews. “That’s the only way we can understand it and deal with it.”

For his part, Fertik is pessimistic that even a Congressional investigation can thwart the war profiteering of the present Bush White House. “It’s impossible to stop it,” he says, “when the worst war profiteers are George W. Bush and Dick Cheney, who operate in secrecy behind the vast powers of the White House.”

John Buchanan is a journalist and magazine writer based in Miami Beach. He can be reached by e-mail at jtwg@bellsouth.net.

Stacey Michael is a New Orleans-based journalist and the author of Religious Conceit. His most recent book is Weapons of Mass Dysfunction: The Art of “Faith-Based” Politics, due in early 2004. He can be reached by email at staceymichael@religiousconceit.com.