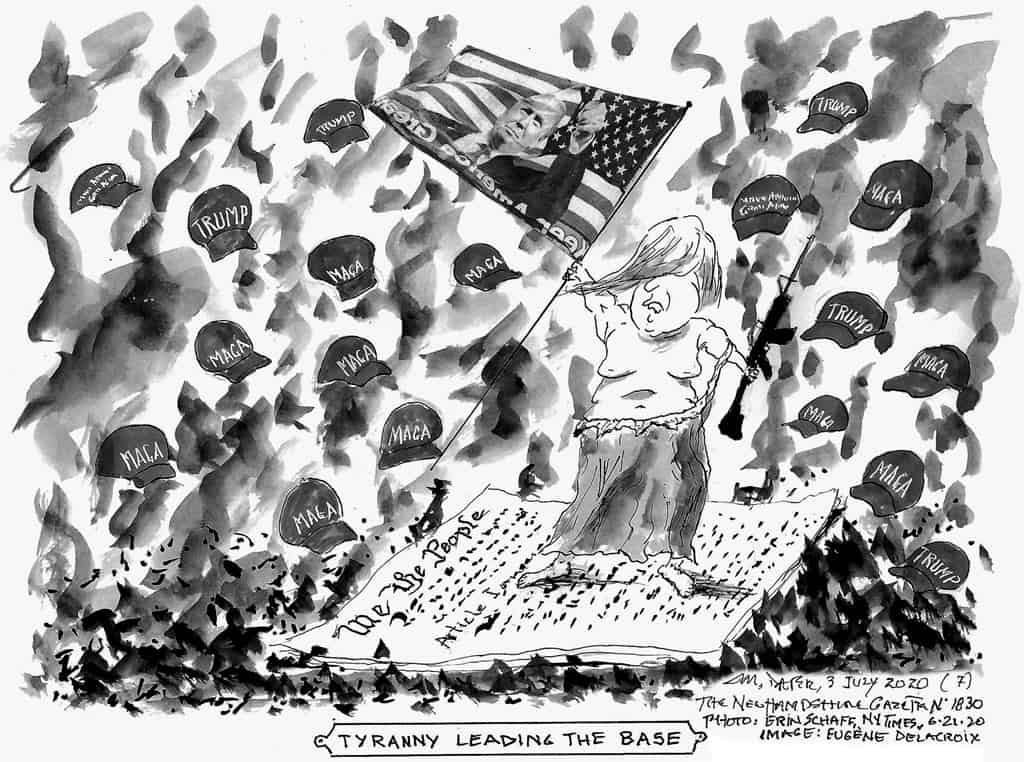 For much of my adult life, I have taught high school English and history, most recently including eighteen years at the Haverford School for Boys in suburban Philadelphia, retiring in June 2019 at the age of 70. In my U.S. History course, I always teach a unit I call “Race in America,” which begins with the first shipload of Africans arriving in Jamestown, Virginia, in 1619, and goes right up to Rosa Parks and the modern Civil Rights Movement.

I sugarcoat nothing. We cover slave life on the plantation with its whippings and brandings and castrations and amputations, the almost infinitely repeated rape of female slaves by their masters (how else can one account for the range of skin tones we call “black”), the separation of families. We look at the failure of Reconstruction and more importantly why it failed (the refusal of the federal government to enforce the 14th and 15th Amendments, the disinterest and racism of northern whites, and the reclaiming of political power by the same southern white racists who had fought to destroy the Union). We study not only “legal” disenfranchisement through poll taxes, literacy tests, and grandfather clauses, but also Ku Klux Klan violence, lynching, and the imposition of penal servitude, “slavery by another name,” that existed extensively from the 1880s into the 1940s.

We look at photographs of thousands of hooded Klansmen and Klanswomen marching down Pennsylvania Avenue carrying American flags with the Capitol dome behind them. And photographs of lynchings with the white lynchers proudly facing the camera and smiling happily. And videos of enraged whites pouring mustard over the heads of black Americans sitting passively at Woolworth lunch counters.

I think it is fundamentally necessary for young Americans to understand that slavery and racism are not a sidebar to American history, but central to that history. We look at the progression represented by 1857’s Scott v. Sandford to 1898’s Plessy v. Ferguson to 1954’s Brown v. Board of Education of Topeka. We study the hard fought, sometimes murderous, but finally successful Montgomery Bus Boycott, the lunch counter sit-ins, and Freedom Summer.

I want to believe, and I want my students to believe, that as Dr. Martin Luther King, Jr., said, “The arc of the moral universe is long, but it bends toward justice.”

My white students often wonder why I keep harping about racism. Once, when I was teaching the poetry of Langston Hughes and Claude McKay in an English class, one boy blurted out, “I never owned any slaves. Why are you trying to make me feel guilty?” My reply was, “I’m not asking you to feel guilty about what your ancestors did. I’m asking you to live your lives in such a way so that your descendants won’t have to feel ashamed of you.” Six months later, at the end of the school year, Ian gave me a ceramic bowl that he’d made. Painted around the rim of that bowl were those words.

So, pat myself on the back and think, “Oh, what a good boy am I.” But I need to remember that this isn’t about me.

Nor is it about my white students, who can walk in my suburban neighborhood without others eyeing them suspiciously, who can shop at the drugstore or the hardware store without being followed by an employee, who will never have to explain how they came to be driving a BMW or Mercedes. What do I say to my African American students in the face of Eric Garner, Freddie Gray, Tamir Rice, Philando Castile, Breonna Taylor, George Floyd, and 1,252 others killed by police just since January 1st, 2015?

One of my former students, a young man named Dan, posted this message on social media:

“More than ever, I’m overwhelmed and confused. I’m overwhelmed when I hear on the news another black man or woman’s life was cut short due to senseless violence and racism. Overwhelmed to see my community continue to hurt while our voices continue to be suppressed and our feelings minimized. Overwhelmed when we say ‘Black Lives Matter’ and the response is ‘All Lives Matter,’ but the actions don’t match the words. I’m confused as to how cops can act off of impulse with lethal weapons, but black civilians must remain cool with guns drawn to their faces and hands behind their backs in cuffs. Confused as to how when we kneel or we protest, we need to find a different way. Confused as to how one can ‘see both sides’ in such calamity. It’s disheartening to see that we as a country need to take into consideration any racist’s feelings because our protest may hurt their ego. Meanwhile, lives continue to be lost and families and communities continue to mourn. Where is the solace for the black community?

“It’s easy to post and spread awareness on social media, and it is appreciated, but let’s take the next steps: signing petitions, making calls demanding justice, and continuing to educate ourselves; most importantly, have the uncomfortable conversations at home, where it all begins.

Those are not the words of an incendiary black man full of rage and ready to lash out at whatever and whoever gets close. They are the words of a thoughtful 20-year-old full of pain and hurt, trying to come to terms with the situation in which he finds himself, his community, and his country floundering.

I don’t know what to say to him. This is not the United States of America I want to be living in. This is not the country I want to bequeath to him. I owe him something better than this. Every caring American—black, white, yellow, red, pink, and blue—owes him and his generation something much better than the racism that has plagued this nation since before it was a nation, that plagues the nation to this day, that makes it difficult to be an African American in America, and downright dangerous to be a young African American male in America.

Dan offers some very constructive actions that each and every one of us can take to try to help change the current sorry state of affairs in this country, to which I would add: get out and vote for candidates who promote inclusion rather than division, get out on the streets and exercise your 1st Amendment right to peaceably assemble and petition the government for redress of grievances, write to your elected officials at every level from your local municipality to those who represent you at the national level (and then write again, and again; most of them can be reached easily by e-mail).

W. D. Ehrhart holds an honorable discharge from the U.S. Marine Corps and a PhD from the University of Wales at Swansea.