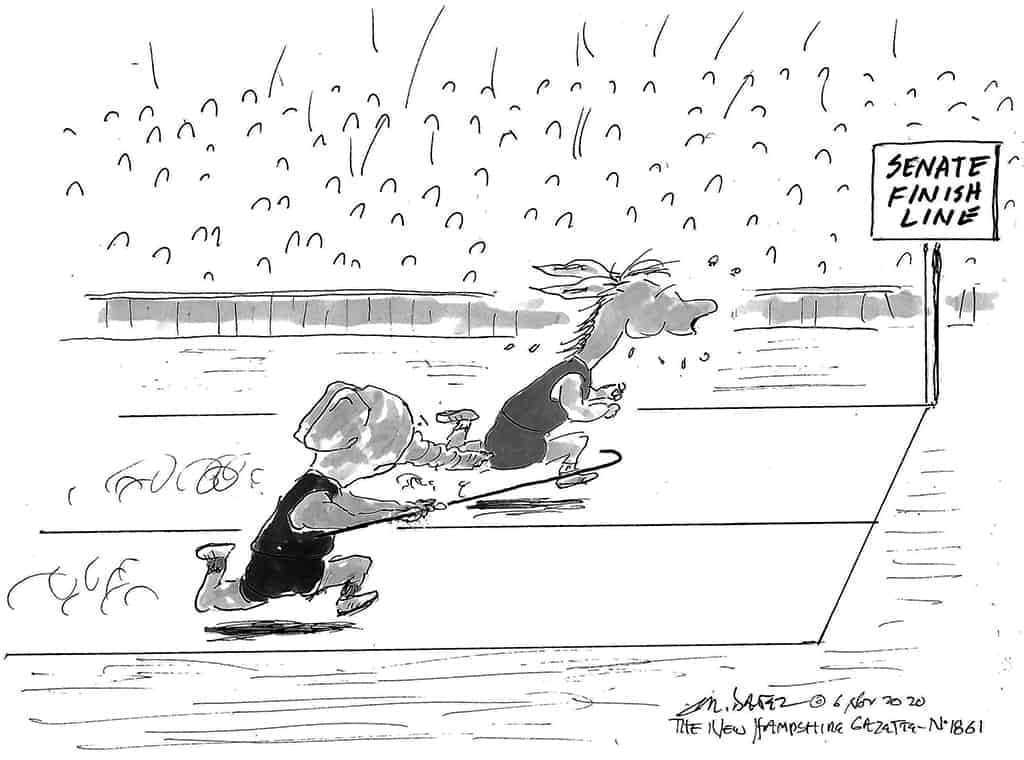 [Muttering: Surely we can write about something that has nothing to do with the orange guy squatting behind the Resolute desk…. Aha! – The Ed.]

Let us now turn to something less distressing that Presidential electoral politics. Almost anything would fit that bill, right?

Michael Hiltzik, the Business Columnist for the L.A. Times, wrote a fascinating piece recently on efforts by Congress to fine-tune the IRS.

Improving an institution so universally loathed—how hard could that be? And therein lies the problem; improvement was not the aim.

Congress is, of course, Constitutionally responsibile for the federal budget, which is to say, raising and spending money.

Individual members of Congress habitually bemoan deficit spending, and yet it continues—at least when it comes to the so-called defense budget, in which case the sky—wait, no: actually, now, outer space is the limit.

Domestic spending is another matter. Every other developed country on the planet sees to it that parents of young children are able to plant their rugrats at a safe, clean, wholesome facility while they go off to work—at a job which provides them with a generous paid vacation. Americans have come to accept that such an arrangement would sap their precious bodily fluids or something. Speaking of which, the federal government gives not a whit if your precious bodily fluids are poisoned by whatever nasty chemicals our industries find to be most profitable to exude. If you can afford to find healthcare to repair the damage done, well, congratulations. The point is, the federal government cannot afford to do a damn thing that serves no purpose other than to make your life semi-livable. That’s your department, Jack. But we digress.

One might think that Congress—with the nation teetering on the brink of widespread civil disorder—might at least try to prod the IRS to bring in as much tax revenue as the law allows, so that the nation could then afford to spend the paltry sums it would take to lower the heat under the pot that’s threatening to boil over. But, of course, one would be wrong.

Willie Sutton had the wit to rob banks because that’s where the money was. The IRS, when it’s supposedly looking for money, goes to where it isn’t. And Congress makes sure of that.

Hiltzik writes that “23,456 U.S. households reported income of $10 million or more last year (that is, for the 2018 tax year), averaging more than $26 million each in taxable income. The IRS audited seven of them. That comes to less than three-hundredths of a percent. That’s about the chance of being struck by lightning at some point in your lifetime. So it may not be surprising that wealthy taxpayers don’t think they’re living dangerously with the IRS.”

Meanwhile, households “with taxable income below $25,000 were audited at nearly 10 times the rate of the richest households, even though their average taxable income came to about $11,000 each.”

The result of this deferential attitude towards high income individuals is staggering. In each of three successive tax years, 2011 – 2013, the IRS left approximately $441 billion uncollected. That amounts to more than half the defense budget—or, in a saner nation, life-changing federal support for, you know, those poor bastards on whom the IRS generally focuses its auditing efforts.

We would be remiss if we failed to quote Hiltzik’s kicker:

“Congress hasn’t entirely impoverished the IRS. After passing a massive tax cut aimed chiefly at corporations and the rich in 2017, Republicans gifted the agency with $320 million in new funding. But as a 2018 analysis by ProPublica noted, the money could be spent only on devising regulations to put the tax cut into action. Not a dime was to be spent on enforcement.”

Either Tax ’Em or Eat ’Em

Before we leave behind the topic of taxation, let’s make a quick trip to sunny Arizona.

Whoever would have thought that such a thing was even remotely possible?

“People earning an annual amount less than these annual quantities will not pay any more in taxes than the norm (4.5 percent).

“Once effective, excise tax surcharges will increase for individuals making an annual income above the mark; combined with the current tax rate, taxable income will increase to eight percent.

“Money gathered from the new tax surcharge will allocate into a new fund used to hire and increase salaries for teachers and non-administrative support personnel, career training and higher education pathway programs for high school students and the Arizona Teacher’s Academy.”

Is anyone in Concord listening?

Not infamous, you say? He will be if enough people get a load of this.

Lewandowski may try to pass this off as a minor coincidence. If he does, we’re not buying it. In the clip, as he speaks those words—were once set in iron, in German, over the gates of Auschwitz—they appear in text, over his head, in the video.

Our thanks to @theserfstv, who identify as “Two indentured plebs [who] give you their spin on the pale blue dot [at https://www.youtube.com/theserfstv],” for posting the clip.

In our previous issue we published an enigmatic and strikingly weird telephone message, apparently from (530) 651-8580, whoever that is. At 12:36 a.m. on Tuesday, we received another:

A search turned up an instance from 2018 in which a wellness clinic received long, rambling emails including the term “tributary terrorists.” Other than that, we have nothing new to report on the WTF front.

We don’t mean to complain, but we must confess that this fortnight was a little more challenging than usual. Our publishing schedule and the Presidential election were, from our point of view, out of phase. Rather than ten days post-election, we ended up with three, requiring us to proceed with a bit more alacrity than is our custom. Such are the trials of this life we have chosen; we would have no other.

Fortunately, the Art Department was willing and able to meet the challenge. The Editorial Department, hobbled as always by the ill effects of nepotism, more or less muddled through. Proofreading, as expected, went like clockwork. We leave it to the reader to assess the overall result.

As we said, we are not complaining. This fortnight has certainly not lacked for entertainment, and much has been revealed. Presuming that the incumbent and his Attorney General stop short of declaring civil war, we expect that after the transition—however bumpy—operating this newspaper will be somewhat less taxing than of late.

Indeed, taking the long view—and considering that we are still pining for newsprint—things are going reasonably well here at The Nation’s Oldest Newspaper.™ John Melcher, our second editor, would probably be envious. The excerpt below reveals the dismay he felt over the results of the election of 1800.

First an apprentice to Daniel Fowle, and later his partner, on Fowle’s death in 1787 Melcher became, at last, his heir. Daniel and Lydia (Hall) had two, or possibly three children, but none survived infancy. A Federalist in an era when a newspaper could be transparent about its politics without suffering a lot of raised eyebrows, Melcher found the election of Thomas Jefferson too much to bear. On February 9, 1802, he sold the paper to a pair of Jeffersonian republicans, Nathaniel S. and Washington Peirce.