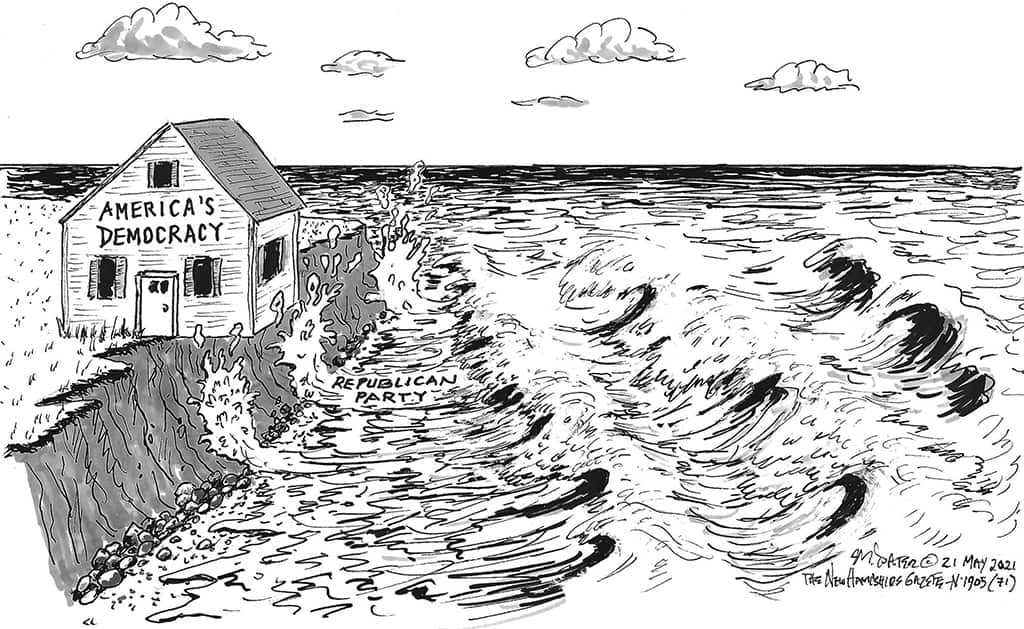 New Englanders are familiar with the scene: video shows rain falling sideways and random objects flying through the air. Crashing waves beat furiously against the shore. Finally the land crumbles. A house falls, beaten to smithereens, and ceases to exist.

Traditionally it’s been a hurricane or a bad nor’easter, and the process takes a few hours. Lately, it’s politics.

Nobody builds on the edge of a cliff, of course.* Things just creep up on you: the Atlantic Ocean, the Republican Party….

Say what you want about Republicans,† they have a plan, and they stick to it.

For at least forty years they’ve been obsessed with packing the Supreme Court with their kind of judge. They have their own official cabal, just for that purpose. Tens of millions of dollars pour into the Federalist Society every year—in tax-free donations, no less, diverted from the U.S. Treasury. Its apologists will point to its other programs, but its core mission is to control who sits on the Supreme Court.

With six out of the nine sitting Justices being present or former members, the Federalist Society has nearly swept the table.

What sort of Court have those rich white folks bought? Surprise! It favors rich white men.

Citizens United, in 2010, established that a person’s right to influence elections should increase in proportion to their net worth.

Shelby County v. Holder, in 2013, ruled that, since the Republican Party had not been found guilty recently of criminally intimidating poor, non-white voters, the law that had been preventing them from doing so could now be discarded.

Now that they have achieved such dominance, one might think that Republicans could relax a bit. Certainly life in these allegedly United States has been relatively and refreshingly placid since Jack Dorsey threw a certain someone off Twitter and Sleepy Joe moved into the White House. It no longer seems like the daily news has been scripted by Chuck Barris of “Gong Show” fame.

Such thinking, though, is not for Republicans. Eugene V. Debs said, “While there is a lower class, I am in it, while there is a criminal element, I am of it, and while there is a soul in prison, I am not free.” Republicans are similarly determined, but with the opposite intent. As long as a poor, non-white person insists on voting for Democrats, that needs to be made a felony.

Last month Jessica Anderson, executive director of Heritage Action—yet another tax-free cabal for free-spending oligarchs—was caught on tape speaking to a group of the usual suspects: people with an odd million or two to spare, which they would hate to see frittered away on infrastructure, or education, or health care, or veterans. Anderson described how Heritage is working hard to ensure that they will continue to have the upper hand: by writing voter suppression laws around the country.

“In some cases, we actually draft [the bills] for them,” she said, “or we have a sentinel on our behalf give them the model legislation so it has that grassroots, from-the-bottom-up type of vibe.”

Do you want artisanal feudalism? Because this is how you get artisanal feudalism. More than 360 Republican-backed voter suppression bills have been filed in 47 state legislatures. As one might expect, many of these bills are quite outrageous: “You gave a drink of water to a person who stood in line for hours in the hot sun to vote? OK, felon.”

To a citizen’s way of thinking, most of these laws are probably unconstitutional as well as outrageous. That’s why only Federalist Society alumni get to make that determination.

Nobody is all bad, of course. We can credit Republicans with performing at least one important public service: their attack on democracy has been so aggressive that it got the Democrats’ attention.

They passed a bill in the House—H.R. 1, the For the People Act—which would defend and expand voting rights, tighten campaign finance laws, limit partisan gerrymandering, and create new ethics rules for federal officeholders.

Sounds good, right? It is good. It’s so good that 68 percent of Americans want to see it passed. Partisan hacks working for the Koch political machine were caught on tape admitting as much.

Before it can become law, though, its counterpart, S. 1, must pass in the Senate. There it faces an obstacle that demonstrates its importance. It only takes 41 Senators—who represent, as Ari Berman points out, just 21 percent of the the country—to block this bill or any other with a filibuster. This is the same crew, remember, that turns a blind eye to the January 6th coup attempt.

We’re beginning to think that this process of bananafication our government has been going through could eventually have a boomerang effect. As we become more and more disorganized and discombobulated, the likelihood increases that Grenada or Panama—or a coalition made up of every country south of the border that we’ve ever invaded—will be tempted to try and take revenge.

Considering the state we’re in, they might get it, too. Given how our deranged government has been blocking action on climate change, maybe they should, in self defense.

Perhaps somehow we’ll get through this. Stranger things have happened. Earlier this month Shakuntala Gaikwad, a 76-year old woman from Baramati, India, who was thought to have died from Covid, was moments away from being cremated but was taken back to the hospital instead, after she began to cry.

It would be wrong to say we know how she felt, but surely we can empathize.

With a lot of luck, perhaps we, too, might be spared.

* Nobody normal, anyway. We have heard some strange tales about people with more money than sense building monuments to their egos on oceanfront property in fashionable locations.