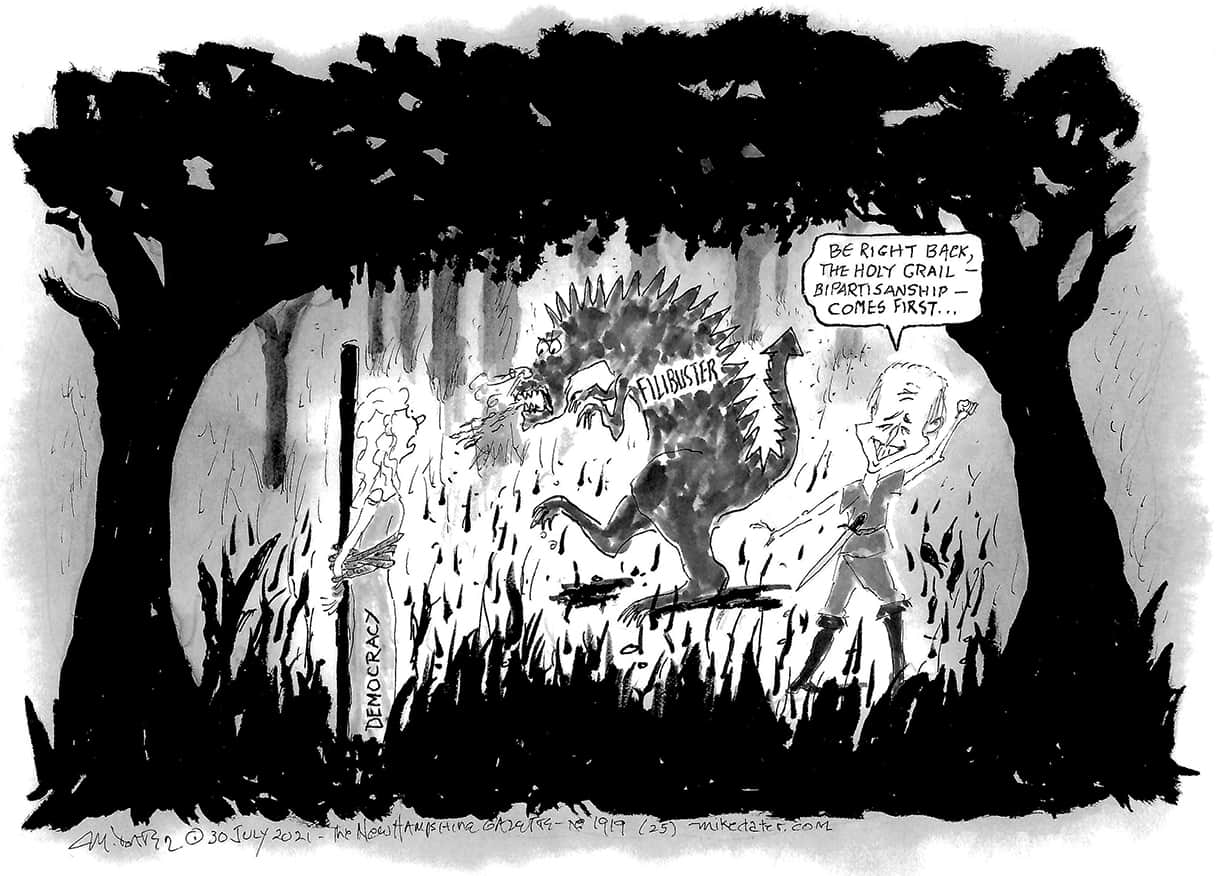 Considering the circumstances, we have decided to craft this Rant as a time capsule, intended to give readers in the distant future  a fuller sense of how the world in which they live came to be created.

That may seem an excessively hubristic undertaking, even for this boastful age. On the other hand, perhaps there is no need to apologize. We are, after all, the Nation’s Oldest Newspaper.™ That unique characteristic doesn’t just invite, it requires us to imagine the otherwise unlikely survival of this flimsy bit of newsprint.

Let us travel, then, into the future: here we are, face to face with…dwindling bands of Homo sapiens, gasping for breathable air and scrounging for food after the big bee die-off, hoping the locusts will return so they can get a square meal.

Oops—went too far. Let’s dial it back a few decades. There—that’s better.

The adolescent hunger for risk remains. It just takes new forms in this new environment. Dirt-surfing on landslides has become an Olympic sport.

Economic inequality also persists, so the Manchin Family has prospered. Wise investments made by the patriarch—wise for his clan, anyway, if you take the narrow fiscal view and overlook widespread disapprobation—created the opportunity for his myriad descendants to own and operate an entire league of Hunger Game franchises. Mountaintops flattened for coal removal provided perfect venues.

No wonder we felt apologetic as we imagined future generations. There’s little we could offer them that’s of any use—other than an honest account of how we came to kill them off.

Hmmm…that thought leads to another: traveling back in time must be impossible. Otherwise there would have been a spike in homicides among fossil fuel CEOs back in the 1980s.

Would they have been justifiable, or not? We’ll leave that for an imaginary jury to decide.

If anyone’s going to do anything to stave off an unlivable future, they’d best get cracking. Historically, records for high temperatures have been surpassed by small margins—one or two degrees. The recent heat dome in the Pacific Northwest shattered previous records by as much as nine degrees—and that’s just one freakish example. Rivers and reservoirs across the west are drying up. Wildfires are spreading like…wildfires—only more so than ever before.

For decades, climatologists have refused to attribute any individual incidences of our increasingly weird weather to anthropogenic climate change. Now, after that heat dome killed nearly 200 people, they are, to use a technical term, freaking out.

The old inhibitions against linking extreme weather to global warming have been swept away—along with the district of Ahrweiler, Germany.

A recent study in the journal Nature Climate Change found that heatwaves breaking old records by huge margins are “two to seven times more likely in the next three decades and three to 21 times more likely from 2051–2080, unless carbon emissions are immediately slashed.”

OK—“Slash Carbon Emissions Immediately” is now on the to-do list…what—it’s not that simple?

According to widely accepted dogma, the U.S.A. proudly leads the allegedly free world. To whatever extent that that is true, then, wherever the world ends up, we are to some degree responsible. Hold on—our BS detector just went off with a deafening clang. Get us re-write….

To whatever extent the U.S.A. actually does lead the free world, we may properly be held responsible—by anyone who can find the power to do so. Good luck on that score.

There can be no question that we led the world down the asphalt path to automobile dependency. The Powell Doctrine expired, though, during the second term of George W.[MD] Bush. Yes, we, with our fetish for internal combustion engines, have done more than any other nation to break the atmosphere—just don’t expect us to pay for it.

Who’s gonna make us? The International Court in the Hague? Good luck getting the U.S.A. to submit to its jurisdiction.

Centuries ahead of his time, Thomas Jefferson feared he knew the answer: “I tremble for my country when I reflect that God is just.”

Maybe God is just—but is he on the job? We see no sign of that.

Our last best hope would seem to be citizens standing up for their inalienable right to life, liberty, and the pursuit of happiness. Unfortunately those rights seem no more accessible than God.

Nobody in Tillamook voted for an outdoor clambake that left a billion mussels cooked in their shells.

Nobody in Portsmouth voted to import smoke from the Pacific Northwest, turning our sunsets a greasy orange and making every breath unhealthy.

Nobody can explain why policies that are overwhelmingly popular with ordinary people can’t get passed in Congress, either.

Winston Churchill said Russia was a riddle, wrapped in a mystery, inside an enigma. Disassembling the matryoshka that is the U.S.A, we find a grift, wrapped in a Noh play, performed at a shopping mall.

A poll taken in June showed that 68 percent of New Hampshire voters support transitioning to a 100 percent clean energy grid by by 2035. Sixty-two percent support the American Jobs Plan investments in clean energy jobs. As with slashing carbon emissions immediately, though, just try and make these things happen.

No, far be it from those of us who see a bad end coming fast to risk offending right wing snowflakes by pushing too hard.

No, better to stay on Joe Manchin’s good side by protecting the filibuster and whatever’s left of the coal industry.

All in all, things look bleak for future generations—and not that great for the rest of us today.

We’re all going down for the stupidest reasons—but at least we’re trying not to offend anyone.