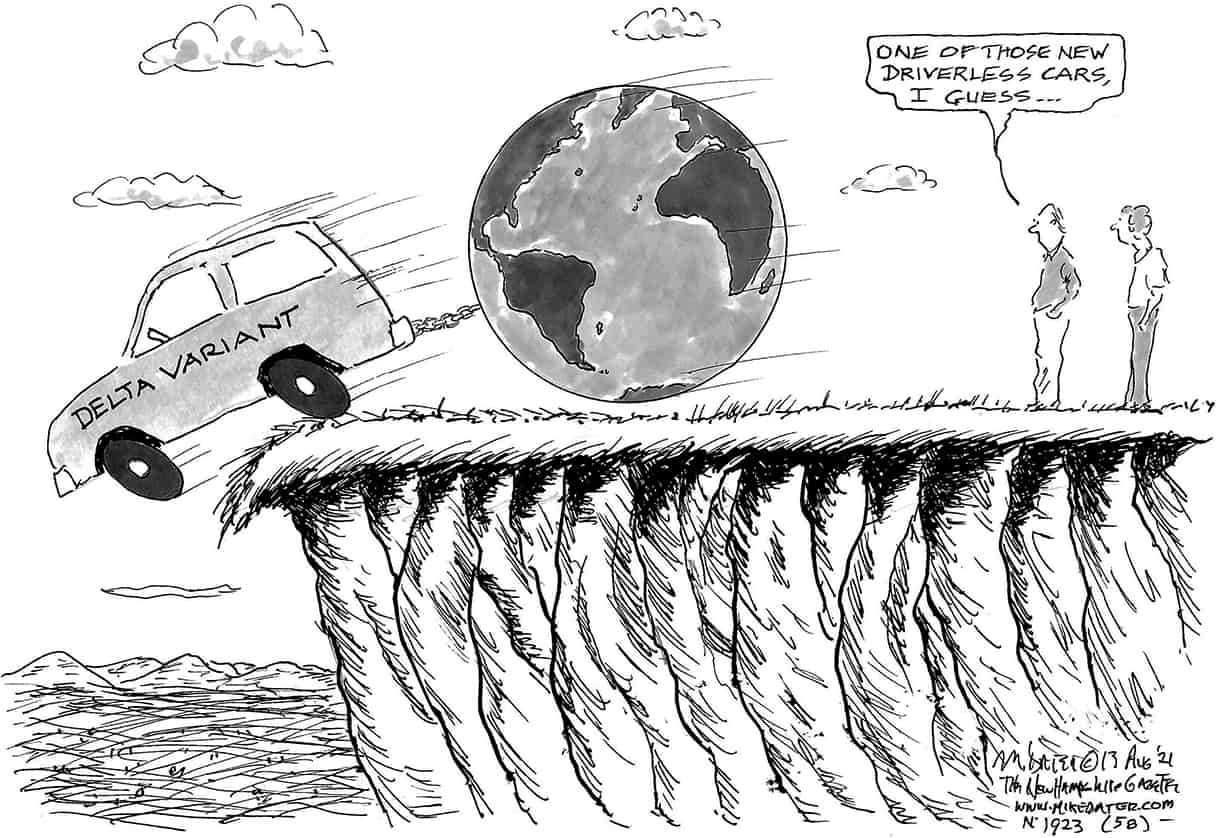 This pandemic has been going on for so long now that it feels like we’re living in “Groundhog Day”—without Bill Murray to entertain us. Worse yet, there’s a sequel coming: “Dumb and Dumber.”

According to a study published last month in The Lancet journal EClinical Medicine, “People who had recovered from COVID-19, including those no longer reporting symptoms, exhibited significant cognitive deficits versus controls when controlling for age, gender, education level, income, racial-ethnic group, pre-existing medical disorders, tiredness, depression and anxiety.”

The study found that the average decline in IQ was seven points. We don’t mean to mock the afflicted, but that is a loss some could ill afford.

Please understand—we’re not joking around here. This is, literally, deadly serious. We just wish certain other people would treat it as such.

According to Johns Hopkins, COVID-19 has killed 618,149 Americans—so far. That’s equal to everybody in Wyoming, plus 96 percent of Concord, New Hampshire.

Once the Delta variant has killed off 25,000 more of us, this visualization method will get a little simpler: everybody in Vermont.

Now, hold onto your hat, because this is where things really get grim.

We know that a lot of Republicans rooted against the U.S.A. at the Olympics because they felt certain athletes’ politics did not meet their standards—this, from the gang that constantly accuses the left of “political correctness.” Projection, it’s a hell of a drug.

By the same token, after it has killed the equivalent of everyone in Vermont, Republicans may go beyond merely favoring policies that give the coronavirus an edge, and start actively rooting for the coronavirus.

Why? Because the next step up in the U.S. population table is the District of Columbia. Are we becoming too paranoid? It’s hard to say.

Last month General Michael Flynn visited the Church of the Good News in Yuba City, Arizona. As one does when a notable pardoned felon visits, parishioner Jason Parker presented Flynn with a suitable gift: an AR-15 rifle with a tasteful woodland camouflage finish. Clearly delighted, the General said “Maybe I’ll find someone in Washington, D.C.” The congregation responded with gales of laughter.

Eisenhower warned us—alas, to no avail—against the military-industrial complex. He never foresaw the politico-religious complex. It may end up killing more of us than some of the enemies against whom we’ve spent untold billions.

A few hours down the sun-blasted road from Yuba City, in Fountain Hills, Arizona, a big, sweaty preacher named Joshua Feuerstein has been exhorting his followers to give the virus a chance.

“You have a sound mind”—is there a fact checker in the house?

In 2015, while standing up for the rights of homophobes, Feuerstein preached—if that’s the right word for it—that “my First Amendment right is guaranteed by my Second Amendment right.”

There’s a T-shirt that says, “If you don’t need a mask because God will protect you, why do you need a gun?”

Understanding that message, though, requires a person to use reason. That skill has been in steep decline since television sprouted up in nearly every American home. Advertisers quickly learned that pandering to the lowest common denominator is the surest way to move more product. We can’t prove it, but we’d bet that most Americans have spent an hour in front of the tube for every minute they spent in school. They certainly act like it.

That’s one reason why, for all our sacred hoopla about rugged individualism, even in this country there’s a place for leadership. Unfortunately, that place is often occupied by the likes of Greg Abbott and Ron DeSantis.

As the Governors of Texas and Florida, respectively, both men seem either eager to reduce the demands of electioneering by slashing the size of their electorates, or are too dumb to pour piss out of a boot.

Florida currently has a runaway lead in the daily death toll sweepstakes. In one bold pro-virus move, last October DeSantis ordered all schools to open for in-person learning. Now, with 141 people dying on an average day, out of 607 nationally, DeSantis has an impressive market share of 23.2 percent.

Abbott is doing his damnedest to do away with Texans. In May he issued an executive order banning mask mandates in public schools and government entities. In July he doubled down, upping the penalties for complying with public health measures. Even so, he can’t keep pace with DeSantis. Every day the Lone Star State is diminished by another 62 Texans, but Abbott’s market share is still just barely over ten percent.

Ultimately, of course, gubernatorial nudges in the direction of self-annihilation are superfluous in a nation of self-starters. This seems to be true across a broad swath of the populace.

For example, take Lollapalooza. For four days, 380,000 people, trending towards the young and the woke, gathered in Chicago to stand unmasked, shoulder-to-shoulder, listening to music. In theory, all the Lollapaloozers were supposed to have been vaccinated.

About a week later, Knucklehead Nation* swarmed into Sturgis, South Dakota for the annual Motorcycle Rally. In practice, among the 700,000 knuckleheads attending, those who have had the shot probably made it tequila.

Few “real Americans” will acknowledge following a philosophy popularized in the postwar years by a wall-eyed Frenchman. Many though, are acting in accordance with a central tenet of existentialism—but with a particularly American spin: eventually we all die alone—so what are we waiting for?

* This is a motorcyclist’s in-joke, not an aspersion. Harley engines made between 1936 and 1947 are called knuckleheads, for the shape of their rocker boxes.