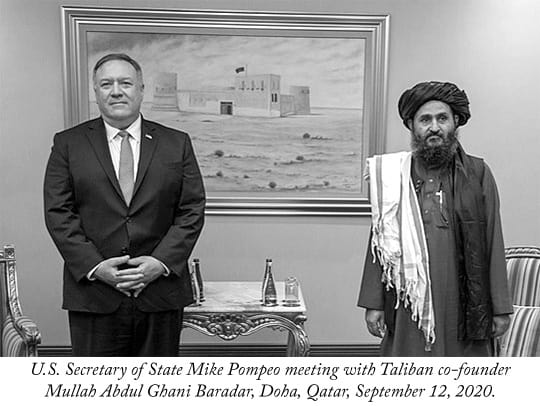 Nevermind that Donald Trump brokered a treaty with the Taliban promising the withdrawal of U.S. troops by last May. (Check out the great photo of Secretary of State Mike Pompeo meeting with Mullah Abdul Ghani Baradar, the Taliban’s de facto political leader, in Doha, Qatar, in September 2020.)

Nevermind that George W. Bush invaded Afghanistan in October 2001 to destroy al Qaeda, but decided to take out the Taliban government while he was at it and create a U.S.-inspired democracy. (I think that’s called Mission Creep. Or perhaps Creepy Mission?)

Nevermind that 18 months later, “W” and his pals Dick “Dick” Cheney and Donald Rumsfeld decided to invade Iraq, which had nothing whatever to do with the attacks on 9/11 (the attackers were 15 Saudis, an Egyptian, a Lebanese, and two men from the United Arab Emirates), thus turning Afghanistan into a neglected sideshow. (But of course, Iraqis would benefit by ending up living in another U.S.-inspired democracy.)

Nevermind that beginning way back in 1979, a succession of U.S. administrations, Democratic and Republican, actively supported, funded, and supplied fundamentalist Muslims—including Osama bin Laden, and many of those who became the Taliban—in their successful effort to overthrow a secular modernist Afghan government in a country where by the late 1980s, 50% of university students, 40% of doctors, 70% of teachers, and 30% of civil servants were women. Read that again. Women! In Afghanistan. And the U.S. helped to overthrow that government.

Then consider that, according to former Baltimore Sun reporter Arnold Isaacs’s calculations, U.S. direct aid to the Kabul government’s security forces over the last 20 years comes to $270,000 for each and every one of the 307,000 Afghan defense and security personnel supposedly on duty as of January 2021 to defend the country against the Taliban in the wake of a U.S. withdrawal. That’s over a quarter of a million bucks for every single soldier and policeman in Afghanistan. (We American taxpayers don’t seem to have gotten much back on that investment.)

Isaacs further points out, based on figures provided by the Special Inspector General for Afghanistan Reconstruction, that the U.S.—and that means you and me as taxpayers (at least those of us who actually do pay taxes, no need to name names here)—has spent $20,925 on each and every man, woman, and child alive in Afghanistan today.

As Isaacs points out, “That’s way more than the entire income of the vast majority of Afghans during that period, especially if you leave out those who got rich from corruptly siphoning a lot of that money into their own pockets. Hard not to think we could have achieved a better result by just folding up some of those dollars in envelopes and handing them out to the population, including those subject to recruitment by the Taliban, to bribe them onto our side. That strategy apparently worked quite well for the Taliban this year.”

I’m not surprised that the shameless Republicans who twice refused to convict a lawless grifter of impeachable offenses, who have described the January 6th insurrectionists as “peaceful protesters,” “normal tourists,” and “true patriots,” who have obstructed and stymied every attempt to investigate the instigator of that attack or the administration he headed, who have engineered the most right-wing Supreme Court since Roger Taney ruled on Dred Scott v. Sandford in 1857, would blame President Biden for what has unfolded in Afghanistan in the past month.

I hate to get personal here, but does anybody with a functioning brain in his or her head really think this is all Uncle Joe’s fault? I feel pretty confident in arguing that Biden’s decision to withdraw from Afghanistan is the first smart decision this country has made about Afghanistan in the past forty-two years.

W.D. Ehrhart received the Purple Heart Medal, Navy Combat Action Ribbon, and a Division Commander’s Commendation for his service as a Marine in Vietnam. He is author of Thank You for Your Service: Collected Poems.