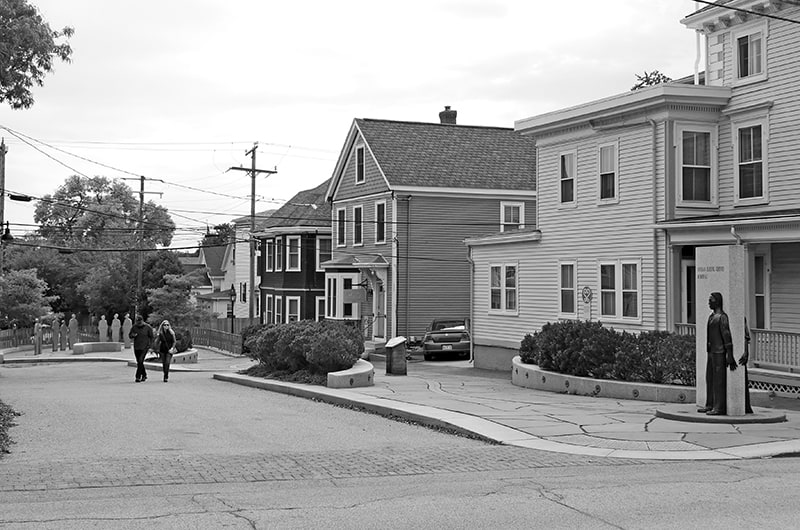 It’s been 230 years ago since the chariot came and carried Primus home. For a man who’s been dead so long, he comes back around pretty regularly. He is always welcome in these pages. Most recently he appeared in The New Yorker. An article by Jill Lepore, headlined “When Black History Is Unearthed, Who Gets to Speak for the Dead?”, mentions Primus because he is known to be buried here, in Portsmouth’s African Burying Ground. Meanwhile, the grave of his enslaver Daniel Fowle remains unknown. We can almost hear Primus saying to Daniel, “Bottom rail on top now, boss.”

Primus X—or, less formally, Primus—made another unexpected appearance on September 29th. He is mentioned in the latest New Yorker. The caption above explains why.

This latest incident caused us to reflect yet again that without Primus’ forced labor, this newspaper might never have survived the 18th century—never mind until today. Our debt to him is both incalculable and unpayable. All we can do is operate this paper intending to make reparation as best we can.

Primus’ most recent manifestation caused us to reflect that we have not yet assembled, in one place, the various items about him which we have published over the years in this newspaper.

In the meantime, we offer our readers, once again, the following column prominently featuring Primus. It was written by Tobias Ham Miller (1801–1870), and published in the Portsmouth Chronicle on October 11, 1861.

Don’t get to thinking, gentle reader, that Uncle Toby knew all these; for some of them died before he was born; but he knew a part of them, and they knew the rest. Through one of them (Whidden) Uncle Toby claims a regular (though not exactly apostolic) succession from Fowle and Old Prime, who were the first printers in New Hampshire, of which undisputed succession he is as proud as any man ought to be of so high a distinction. The order of succession is this: Fowle, who established the New Hampshire Gazette, had the old negro Prime, or Primus, for a pressman; John Melcher was an apprentice to Fowle; Whidden (who died here only a year or or two since) was an apprentice to Melcher; and Uncle Toby was an apprentice to Whidden.

With this man, who was as kind a man as need be, Uncle Toby wrought at printing some time since; in an office belonging to John Melcher, who was the first State Printer New Hampshire ever had, and who lived till a very recent period. When Uncle Toby was a boy with a stint, Mr. Melcher would sometimes send him on an errand—but would always take his ‘stick,’ and ‘set’ for him while absent, and when he returned would commonly tell him a story when he laid down the stick or emptied the “stickful.” He was always certain to set a little more than the boy would have done; to mark the copy where he left off;—and always to deal in this little matter so justly and fairly, that Uncle Toby was well pleased to listen to his stories. Some of these stories were of Old Prime, who was a negro pressman, belonging to Daniel Fowle, founder of the New Hampshire Gazette.

Mr. Melcher was a correct compositor, a careful proofreader, and a good press-man; and if any man ever hated blotches and bunglers, he did. When he lost all patience with bad press work, be would say, “Why, I have seen a negur, who could not tell a letter in a book, who did better press-work than any of you!” Sometimes I have tried to imagine what old Primus Fowle thought of his business, and how much pleasure he must have taken in printing books he could not read, and working hard without pay. He could not strike for wages, but he could grumble—and tradition says that he did sometimes; and probably he did it pretty often, for his temper was rather peppery, and he could snap out a reply quite as tart as any reproof that was given him. Some time before the Revolution, Mrs. Fowle died; and in those days, at funerals, the negroes in a family walked with the whites, as mourners, each white member of the family having a black yokefellow at the left hand. Primus and his master on this occasion were chief mourners; but when they took their places in the procession, Primus inadvertently got on the right hand, which, in this case, was evidently the wrong side. His master saw the error, and winked, and nodded, and pointed with his finger for Primus to exchange places; but to no purpose; he touched him, but the negro remained immovable. At last he whispered, “Go to the other side,” expecting to be promptly obeyed in so slight and reasonable a request; but, to his surprise and that of the bystanders, Primus screamed out, “Go tudder side ye’sef, ye mean jade!” The master of course complied, and the procession moved off.

In due time Mr. Fowle himself died, and, as he left no children, his newspaper and printing office passed into the hands of his apprentice, Mr. Melcher, whose term of service being nearly run out by its own limitation, was now closed by the death of his master. With the press went the pressman, and old Primus probably did the same work in the same way, under the new master, as be did under the old, and perhaps noted no change. Bowing down to the press, as he toiled year after year, be had a permanent stoop, and stood at his work something in the shape of a capital F. In this posture he labored and grumbled for years, and seemed to grow no older—but he did—and by and by he became so stiff and dull and feeble as to be incapable of any labor whatsoever. He was, however, cared for by his master, as to food and shelter, and suffered to spend his time as he pleased. Without companions, and with no ability to read, he seemed to have no higher pleasure than to seat himself on the door-steps of shops or houses in the old paved street of Portsmouth, and sit for hours together, generally in the sunshine. The boys often amused themselves by offering him a copper for standing straight—a feat utterly impossible; but he would attempt it, and with much effort and strange grimaces, straighten himself out as nearly as possible.

To the honor of the boys, be it said, he commonly got his copper; and then he sat down again to sun himself, to look at the passengers’ feet as they went by, and possibly to muse on the passage back to Guinea, whither all the negroes here used to think all black friends went after death. That was the most beautiful superstition of which their minds were capable—and surely nothing of the kind could be more harmless. Primus returned, however, to the dust, not of Guinea, but of New Hampshire, the scene of his toils, and has long occupied that narrow house where the weary are at rest! Primus was buried, with all the negroes of his day, in the old negro burying ground, front of the old jail; in other words, his dust now reposes either under the south, end of Chestnut street, or perhaps under the north side of Court street.

Let no true lover of our noble craft blame Uncle Toby for selecting such a subject for a sketch. One of the earliest printers in New Hampshire was a black slave; and the early history of the State always seems imperfect to him if Prime is not seen working at the press, printing he knows not and cares not what.

This text comes from a binder of Uncle Toby’s collected columns which was assembled by Richard Candee and is preserved at the Portsmouth Athenaeum. The column originally appeared in the Portsmouth Chronicle (1852–1918). We have made a few minor changes in punctuation.