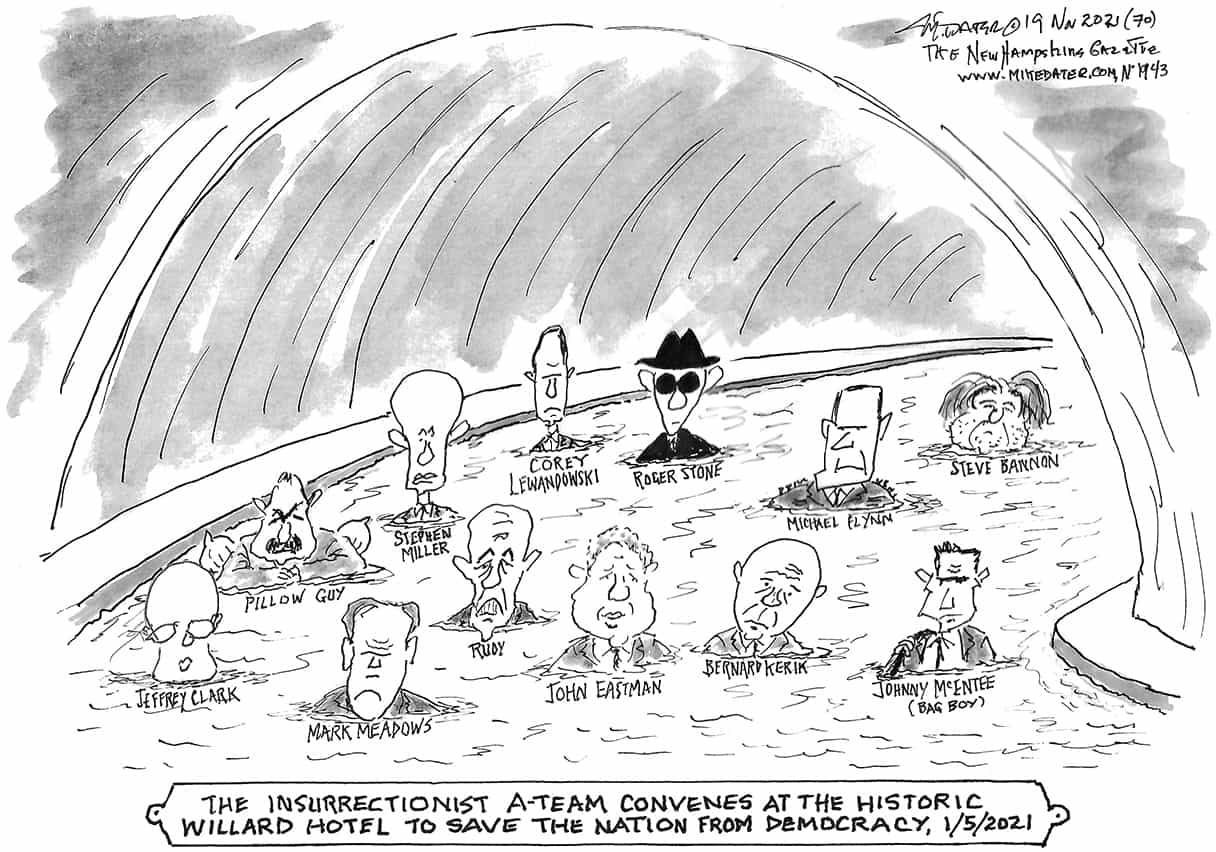 Except for a few Amazonian tribes, all of us Earthians have by now been introduced to the MCU, the Marvel Cinematic Universe. A movie franchise making that much money becomes culturally unavoidable.

Those celluloid shenanigans may be safely ignored, of course. At least, so we presume. If only we cold say that about the RCU—the Republican Criminal Universe.

True, the nation’s plunge into competitive weirdness does seem to roughly coincide with the release of Iron Man in 2008. We suspect, though, that other events that year may have had a more disruptive effect.

For example, the presidential election was won by a Black man. If Barack Obama had gone to the White House to work as a waiter, no one would even have noticed. Suddenly, though, everyone was expected to display—even if only for the office—some measure of respect to a man who was not white.

That perceived alteration in “the natural order of things” caused a sizable number of Americans to have hurt feelings. A single election, though, no matter the outcome, does not an apocalypse make. The roots of our discontent run deep.

From 1619 until the mid-1960s, blatant displays of racism had been tolerated in most parts of the country, and mandatory in others. Then Lyndon Baines Johnson—that traitorous Texan—went and screwed all that up.

By signing laws responding to the demands of an overwhelming social movement, LBJ disrupted the lives of a lot of people whose identity was based on their ability to look in the mirror and confirm that—yup—they were still white.

Most veterans of that war agree that it was a colossal something or other—either a colossal mistake, or a colossal failure. We shouldn’t have killed any of those people, or we didn’t kill enough.

Those in the latter camp generally believed they had been betrayed by people in authority, and had not been “allowed to win.” A sub-set of this group also believed that having pale skin was a sign of inherent superiority.

“The Vietnam War narrative works, first of all, to unite people who had previously not been able to be in a room together and to have a shared sense of mission. So, for instance, Klansmen and neo-Nazis after World War II had a very difficult time aligning because Klansmen tended to see neo-Nazis as enemies…the people that they were confronting in World War II. But after Vietnam, they see common cause around sort of their betrayal by the government and around the failed project of the Vietnam War.”

Belew’s book culminates with Army veteran Timothy McVeigh’s 1995 bombing of the federal building in Oklahoma City. Not many hard-core so-called “patriots” dare to rally ’round McVeigh, but he sure did give the Overton Window a hard yank to the right; witness, for example, the support for the Bundy standoff.

We could all use a little comic relief by now, so let’s visit France. Alexandre Auguste Ledru-Rollin was a wealthy, jowly lawyer, politician, and newspaper publisher. His La Reformé is said by an anonymous Wikipedian to have had “a left-wing radical liberal republican editorial line,” which must have made for a lively reading experience.

Alex is reported to have said, “There go the people. I must follow them, for I am their leader.” The attribution is dubious, but that’s neither here nor there.

What matters is that the principle being described may explain the GOP’s increasingly insane idiosyncratic behavior.

New Hampshire’s gerrymandered Republican Executive Council demonstrates this principle nicely. A right wing mob effected a de facto veto over a $27-million contract—exacerbating the already-worsening pandemic. The Council had to resort to agenda-fiddling in order to reconsider the contract without the din of obscene abuse.

With their old guard dying off, and their support dwindling among those with moderate political views, the Party welcomed and encouraged all the highly motivated nut cases they could lure into their sideshow tent. The resultant feedback loop between unscrupulous leaders trying to stay ahead of a mob of unhinged followers—coupled with appalling but apparently inevitable Democratic fecklessness—has created a situation in which our next President may be foisted upon us by the brain trust depicted immediately above.

“Politics, as I never tire of saying, is for social and emotional misfits, handicapped folk, those with a grudge. The purpose of politics is to help them overcome these feelings of inferiority and compensate for their personal inadequacies in the pursuit of power.” – Auberon Waugh

It’s supposed to be a free country, so people ought to be able to engage in competitive grotesquerie if they want. We just wish they’d quit insisting on killing off the rest of us in the process.

There once was a time when, at this stage in a drama, one could have hoped for a deus ex machina to appear and save the day. Sadly, the requisite lifting apparatus broke down thousands of years ago.

Common sense has become an uncommon virtue; the worst and the weirdest now run the show.