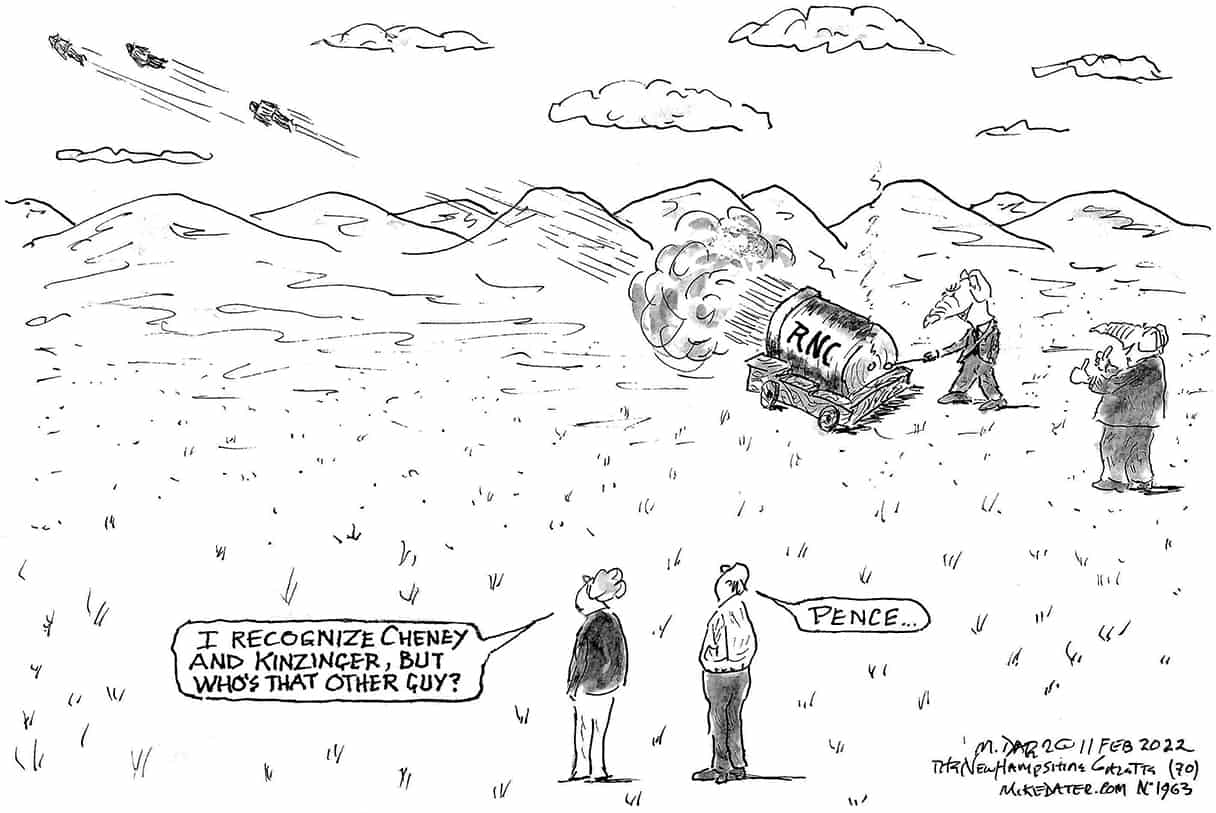 Typical run-of-the-mill media outlets are obliged by industry standards to employ quotes from accredited experts to convey even obvious statements of fact.

In our case, we are imbued with expertise as a consequence of our seniority. Therefore we can confidently proclaim ex cathedra that things have been rather grim of late.

The U.S. death toll from Covid hit another milestone on January 31st. Officially the total is now over 900,000. Omicron—the “mild” variant of Covid-19—took just 51 days to knock off the latest tranche of 100,000 Americans. That’s the equivalent of another 9/11 every 36 hours.

Awful as it is, that’s an understatement. The Wall Street Journal—no lefty rag—pointed out that the true death toll is nearly a million already, as calculated by the number of “excess deaths” since the pandemic began.

Every day NPR interviews health care workers, shell-shocked from treating an endless stream of patients dying of Covid after refusing the vaccine. Meanwhile, patients with cancer and heart disease go untreated. If that’s too depressing, of course, you can always switch to Fox “News,” where Covid only causes flu-like symptoms.

On the international news front, there’s an actual front between Ukraine and Russia. In this case, an actual expert opinion might be useful to determine the likelihood of World War III. Unfortunately, The Google has been unable to find us anyone in Las Vegas who has calculated those odds.

As is often the case with current events, these things aren’t so much news as they are variations on old themes. At last, though—and, coincidentally, at least here in northern New England, just when it’s most needed, as the days finally begin to turn that cold corner and get longer rather than shorter—at least, and at last, we have something new to laugh at. We speak, of course, of the Republican Civil War.

Last Friday Dolt #45’s very own Veep went to Florida and fired on Fort Mar-a-Lago. Somehow, a man who’s afraid to be alone in a room with a woman to whom he’s not married mustered the courage to appear before a gathering of the Federalist Society—the veritable Vatican of vetting for our Supreme Court—kissed the ring of its longtime leader Leonard Leo, and called out his ex-boss by name: “President Trump is wrong. I had no right to overturn the election.”

Granted, Pence did no more than speak the truth. Still, for a 21st century Republican, that’s the equivalent of a vampire in a Speedo sitting in the sun, quaffing holy water as he reads the Bible. Disdaining half measures, Pence also reiterated a previous heresy, calling January 6, 2020 a “dark day in the history of the United States Capitol.”

A rational but confused person might think from this language that the RNC was accusing errant members of beating up cops, breaking into the Capitol, smearing feces on the wall, and pilfering random whatnots. But nooo….

No, the RNC was charging Representatives Liz Cheney (R-Wyo.) and Adam Kinzinger (R-Ill.) of participating in a “Democrat-led persecution of ordinary citizens who engaged in legitimate political discourse”—to wit, beating up cops, breaking into the Capitol, smearing feces on the wall, and pilfering random whatnots. The resolution passed by a voice vote in less than a minute.

Appearing in Texas the following day, the former guy, unsuprisingly, came down on the side of the smearers. He promised that if he is somehow elected—or perhaps appointed by the Supreme Court, or installed by the Proud boys through some other as-yet undreamed of process—“we will treat those people from January 6 fairly…and if it requires pardons, we will give them pardons because they are being treated so unfairly.”

To their credit, a group of former Republican big- and medium-wigs calling themselves the Renew America Movement quickly and boldly condemned the RNC “for excusing the actions of men and women who battered police officers, ransacked our nation’s Capitol, called for hanging the Vice President of the United States, and sought to overturn a free and fair election.” The list included Anthony “Ten Day” Scaramucci, ex-Rep. Bob Dold, (not to be confused with the late Sen. Bob “Bob Dole” Dole, New Hampshire’s own ex-Rep. Charles Bass and ex-Sen. Gordon Humphrey, and noted hiker and former Governor of South Carolina Mark Sanford. Senator Susan Collins of Maine did not sign the manifesto, but did say she was deeply concerned by Trump’s promise of pardons. She even told ABCs “This Week” she would be “very unlikely” to support him if he runs in 2024.

The Civil War of 1861–1865 was famously tragic for scenes in which brother fought brother. The present GOP dustup has yet to match that, but the next Romney family reunion may be awkward. The RNC Chair who led the censure was Ronna McDaniel. Her uncle, Mitt Romney, chastised that action in Biblical—or Book of Mormonical—language: “Shame falls on a party that would censure persons of conscience, who seek truth in the face of vitriol. Honor attaches to Liz Cheney and Adam Kinzinger for seeking truth….”

It was on Tuesday, though, this whole kerfuffle got real. Senate Minority Leader Mitch McConnell—the closest thing the GOP has to a brain trust—stepped up to slap down the RNC for censuring Cheney and Kinzinger. Now we know: this thing is on.

Perhaps some day in hindsight, none of this will seem so amusing. Surely it’s no joke that the divide between left and right in this country has made civil war such a common metaphor. But when push comes to shove within the ranks of the side that’s causing all the trouble…well, what can one say?

“Lay on, Macduff, And damn’d be him that first cries, ‘Hold, enough!’”