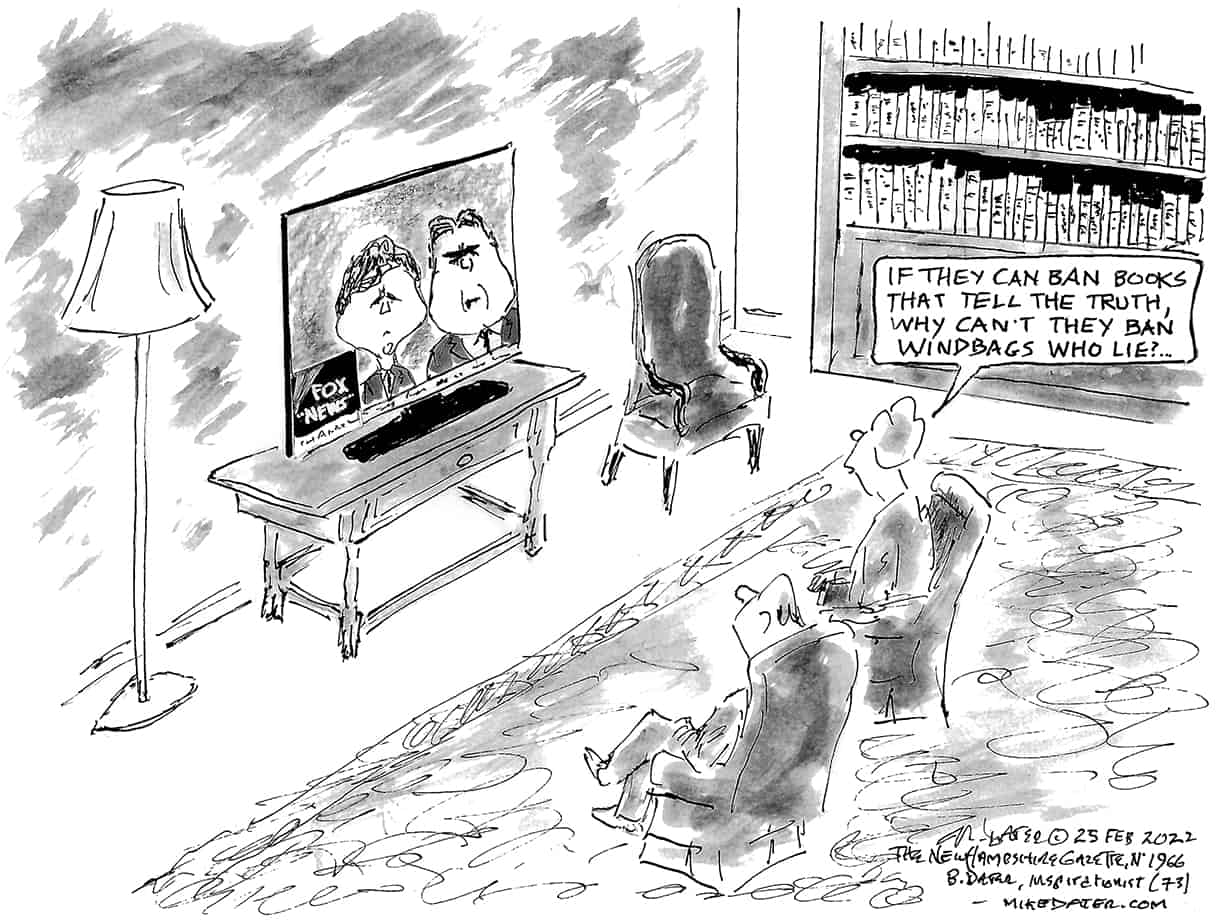 The good news is that everybody’s worried. They should be.

The bad news is that a third of the country is having a coniption over fictional problems.

That would be all right if those people would stick to tradition by sitting back and doing nothing. Our rule of thumb here in the office is that half of all real problems solve themselves without intervention.* You can’t say it doesn’t work—we’re still here in our 266th year.

But noo—millions of people are so cranked up that they’re bound and determined to fix what ain’t broke—and many of them think guns are the right tool for the job.

Glocks and AR-15s are not tools, though—the tools are the fools toting them around in public.

Now, that last clause just violated a couple of tenets held sacred by all the nation’s best J-schools. Not only did we express an opinion, we insulted one-third of our potential readers.

We would argue, in response, that when the house is on fire and people are trapped inside it’s perfectly OK to knock the god damn door down.

Hyperbole, you say? If only…. Our problem is choosing which catastrophe to use as an example. The potential second term of an obnoxious former president who staged an autogolpe his first time around? The minority party now holding Congress hostage, hell bent on the eradication of democracy? Perhaps the unending litany of climate stories featuring scientists uttering some version of “it’s much worse than we thought”? Each of these calamities is being exacerbated by the way it gets reported.

In fact, given the way the news racket runs, it’s a wonder so many of us are still alive.

Of course, nearly one million of us aren’t. That’s how many Americans Covid has killed so far. And—how can we say this without courting a libel suit?—we suspect that a resonable person might conclude that one or more of those deaths could fairly be laid directly at the feet of Murdoch’s Fox “News”?

Nearly a year before Covid hit, Wayne H. Merritt wrote to us about Stochastic Terrorism, offering this definiton: “the use of mass communications to incite lone wolves to carry out unpredictable violent acts.” The practitioner is “someone who is certain that their inflammatory rhetoric will stir up violence but does not know exactly what will happen or who will do it, or where or when.”

Throughout the pandemic, Fox has been a fount of misleading twaddle. The network has a mandatory vaccination policy, but its so-called “talent” routinely casts doubt on vaccine efficacy. Impeccably attired bimbos and himbos have filled the screen all day and night, eroding the best science available to humanity.

Sitting atop this dungheap of lies and inanity are the terrible twins of TV, Tucker Carlson and Sean Hannity. We’ll know we live in a just world when these birds have each been charged with a hundred thousand counts of stochastic homicide—aggravated stochastic homicide, considering their displays of depraved indifference to human life.

Many of their victims had surely been avid members of their audience. Some wretched souls—certainly not us—will take ironic satisfaction in that.

Let us remember, though, when these martyrs to disinformation still wandered among us, unmasked and unvaccinated, they surely managed to infect some unknown number of innocent victims.

The Original Gangster in this prolonged massacre is, of course, The Former Guy. His administration’s general ineptitude gave the virus a boost right out of the gate. Then the Leader of the Cult put it into overdrive by dismissing the danger it presented.

Dolt #45 doesn’t seem to have the mental horsepower to design and coordinate any complicated policy—not even one that screws things up. Neither do Carlson or Hannity. But don’t worry, that’s not a problem—that’s what propaganda mills are for.

Enter the American Institute for Economic Research [AIER], a “nonpartisan research and education nonprofit 501(c)(3) organization focused on the importance of markets,” which “educates people on the value of personal freedom, free enterprise, property rights, limited government and sound money.” In other words, it’s a cabal of libertarian free-market fetishists. They hang out in a huge stone “Cotswold ‘cottage’” in the Berkshires, which sits on a greensward the size of Rhode Island. [Free market megalomaniacs are suckers for big stone buildings. See the photo on page seven. –The Ed.]

In October, 2020, AIER issued its Great Barrington Declaration. Isolate the vulnerable, it said, and let everybody else live without precautions. Open up everything and go about your business, people—it’s time for herd immunity. Or, as virologist Greg Gonsalves calls it, “culling the herd of the sick and disabled.”

The Declaration is named after the Massachusetts town where AIER hangs out. It has a population of 7,172. Covid is currently killing that many people every 3.9 days.

Various countries around the globe proved that by taking a serious approach to prevention, the virus could have been kept under far better control. Americans, of course, scoff at such displays of weakness.

Moreover, our advertising industry has inculcated in us a pathological perceived need to have whatever we want, right now, regardless of the consequences. Speaking of weaknesses….

Thanks to denial, crackpot schemes like “herd immunity,” and self-indulgence, this thing just kept on rolling—and mutating. Delta appeared in mid-April 2021, and there went everyone’s hot wet summer. Omicron showed up around December, so everyone had something to give to their relatives for the holidays.

If the disgruntled minority were ever to decide en masse that the time had come to lock and load, they could certainly cut a broad swathe through the rest of us.

It’s hard to conceive, though, how they could kill as many with bullets as they already have with the virus.

* With fake problems, our success rate approaches one hundred percent.