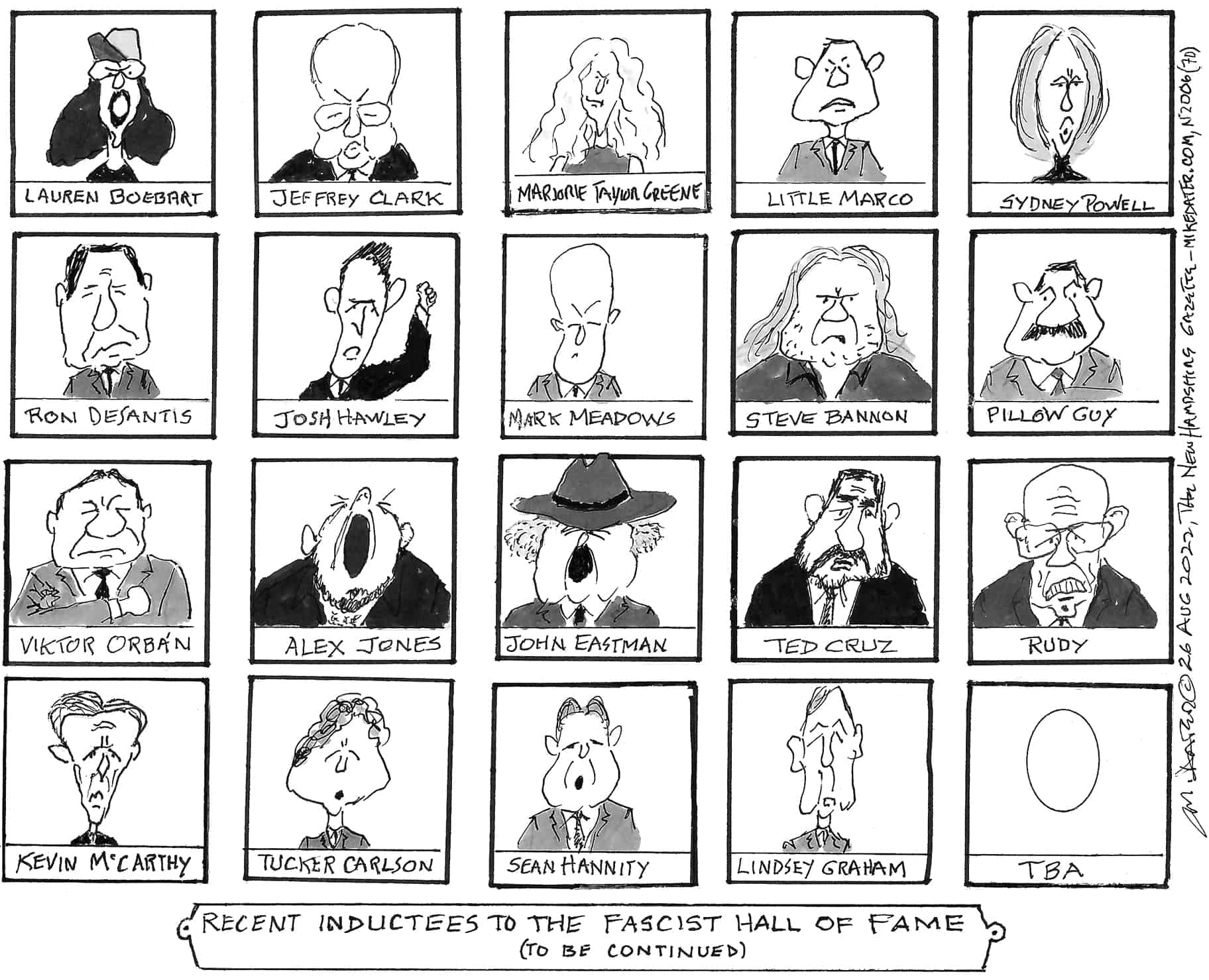 Is it ever appropriate for a newspaper to state that a fascist is a fascist? If so, when? If not, why not? These questions have been plaguing us of late.

Perhaps more recent editions of the Associated Press Stylebook hold the answer. Alas, our copy was published in November of 1990—midway through the “kinder, gentler” George Herbert [Hoover] Bush administration. House Minority Whip Newt Gingrich had just teamed up with pollster Frank Luntz to distribute a memo to members of the Republican Party. Titled, “Language, a Key Mechanism of Control,” a key passage in that memo read:

“The [vocabulary] list is divided into two sections: Optimistic Positive Governing words and phrases to help describe your vision for the future of your community (your message) and Contrasting words to help you clearly define the policies and record of your opponent and the Democratic party.”

Two things about that sentence seem startling, in retrospect. Though it appears in an official GOP document, it speaks in favorable terms about governing. Also, it contains a reference to the opposition which respectfully uses the correct name of the Democratic Party. Conspicuously absent is the “Democrat Party” slur, heard so often nowadays. A Republican talking like that these days would be denounced as a RINO. These are minor quibbles, though—mere distractions.

As the cartoon strip “Doonesbury” noted in 2008, the Gingrich/Luntz memo served as “The Magna Carta of Attack Politics.”

The Republican Party was “active, building, candid, caring, common sense, confident, courage(ous), (for the) family, (and) freedom,” and so forth and so on, ad nauseam, right through to its “unique vision.”

The insidious Democratic Party, on the other hand, stood for “abuse of power.” It was anti-flag, anti-family, anti-child, and anti-jobs. How it escaped being anti-pet we’ll probably never know. Democrats would “betray” you in their “bizarre” compulsion to serve the “bosses [and the] bureaucracy.” They would “cheat” you, using “coercion.” The “consequences” of their “corruption” would include “criminal rights, crisis, cynicism, [and] decay. The state of the nation would sink ever “deeper” as Democrats indulged their urge to “destroy.” Their “destructive” ways would “devour” the nation, leaving us all in “disgrace.” Yadda yadda yadda. Nearing the end of their list of pejoratives, Gingrich and Luntz had the gall to include the term “traitors.” Dare we suggest that in light of recent events, this seems just a tad ironic?

It’s been more than thirty years since the Republican Party issued this litany of invective. How has the country changed?

It is as if the Overton window which defines the limits of acceptable political expression had been chained to the bumper of a coal-rolling pickup truck and dragged to a Ku Klux Klan rally.

As we look back over that last sentence, though, we begin to worry a bit. Many respectable news organizations have reported lately that the public, sick of rancor, wants to see more civility and bipartisanship.

Under these circumstances, what right do we have to make such an inflammatory statement? Do the facts on the ground bear out that assertion? Perhaps we might find some characteristic sign….

How about brownshirts? Brownshirts seem to be everywhere these days. We refer, of course, not to some sartorial choice, but to individuals whose commitment to right wing authoritarianism transcends ballot boxes and embraces violence.

For example, on August 9th, Michelle, aka @LivingBlueTX posted a Twitter thread of 70 brief videos. In each one an individual declares, in his or her own special way—and we do mean special—that they are looking forward to finally shooting it out with the FBI, IRS, U.S. Army, Marines, Space Force, or, we suppose, the Postal Service if it comes to that. “I’d report them all to the @FBI,” Michelle tweets, “but I literally don’t have time to…report the hundreds of videos like this I’m seeing on my alt tiktok.”

That’s just one person’s random collection of lone gunpersons with itchy trigger fingers. Far more organized, and arguably more of a threat, is Pastor Sean Moon’s Rod of Iron Ministries, who wears a crown made of AR-15 cartridges. Gun fetishism runs in the family. Sean’s brother manufactures semi-automatic versions of the iconic Tommy  gun, and multiple versions of the inevitable AR-15. Their father was Reverend Sun Myung Moon. He wrote in 1969, “All Unificationists must take an interest in guns…. Why am I involved with guns? The satanic world has done its conquering with guns. … This year we also sent five hundred guns to the United States. … America is a golden market; it is virgin soil.”

Tim Dickinson recently wrote about this bunch for Rolling Stone. Among those who have associated themselves with Rod of Iron Ministries have been Steve Bannon and the Trump brothers, Beavis and Butthead.

So, yeah, after giving the matter some thought, we’re going to stick our editorial neck out: this country is in fact chock full of fascists, they’re trying to take over the joint, and no one seems ready to stop them. For that matter, few seem prepared to call them what they are.

Sunday morning talk show host Brian Stelter ended his August 21st show on CNN by saying “We must make sure we don’t give platforms to those who are lying to our faces.” That’s a laugh, if your sense of humor is sufficiently dark.

Former CNN boss Mark Zucker, more than any other single person, tripped America into the gutter of fascism. While he was running NBC, Zucker gave the green light to one of the dumbest TV shows ever. Over umpteen seasons it allowed a certain bankrupt has-been to build a brand amongst no-information voters. When that dolt ran for president, Zucker’s CNN gave his campaign approximately a bazillion dollars worth of free advertising.

Now Trump donor John Malone has bought CNN, Stelter’s been fired, and, as someone tweeted, “the very next hour Jake Tapper let Dan Crenshaw lie to his face with no fact-checks or pushback. Journalism at CNN is dead.”