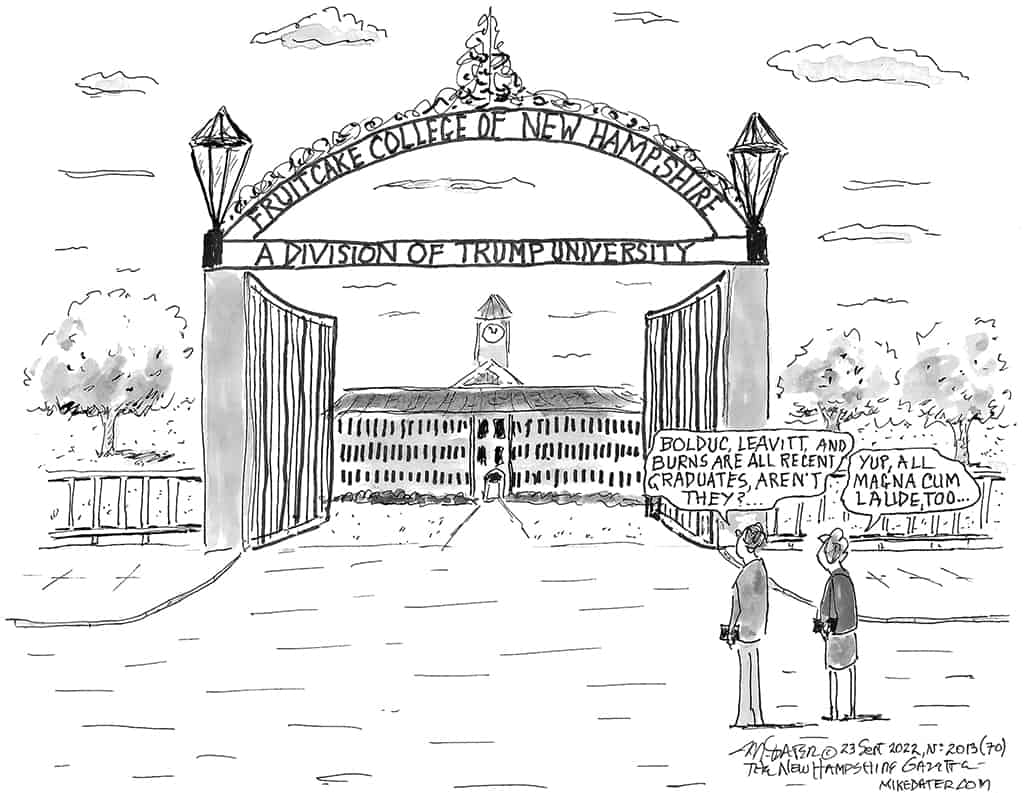 New Hampshire’s Republicans have spoken. On Primary Day, September 13th, their voters picked, for both Congressional districts and for the Senate, the Trumpiest candidate on the ballot.

Summer this year seemed to suddenly flip into fall. So it is with our politics. Our primary elections come late, dictating only a brief season for the general election. In a little over six weeks we should know how this all turns out.

That assumes, of course, that our civic wheels stay on the rails laid down by law and custom. Here in the newsroom, making assumptions comes naturally; we are, after all, entering out 267th year in this racket. Habits do develop.

Recent experience suggests, however, that we ought to at least consider getting with what appears to be the new program. Adding a few more cars, as it were, to our railroad metaphor, we could speculate that one of the candidate’s campaigns might insist on some previously un-enumerated right to make use of a jet-powered locomotive.

This is all to say that, in the absence of a hat trick of absolute Democrat landslides, we may see one or more protracted scuffles over who actually won. Each of the GOP candidates would, in the event of a close outcome, be expected by their supporters to put up a good fight.

The bounds of political discussion, though, have expanded considerably since the election of 2016. What constitutes a close outcome? What previously-accepted norm might suddenly appear to some disappointed loser to be an egregious violation of his or her God-given rights?

This is where things could really get interesting, since control of Congress may be up for grabs. In fact, with 435 House seats at stake, and one-third of the Senate, we’ll be surprised if things are settled before December rolls around.

This much is certain: if there is a hangup, this is the state for it. In 1974, Republican Louis Wyman beat Democrat John Durkin for the Senate seat previously held by the retiring Republican, Norris Cotton. Durkin appealed Wyman’s 355-vote victory and won the recount with a 10-vote margin. Naturally Wyman appealed. Durkin, a wicked smaht lawyer, fought back. For nearly a year, Wyman and Durkin disappeared in a cartoon-worthy cloud of flying dust and legal fists. Eventually, Durkin won a special election in September, 1975.

It was legendary. Our right to hold the First in the Nation™ Presidential Primary Election® is threatened and may not last; but if there is to be a full-scale, fate-of-the-nation, donnybrook with the control of Congress hanging in the balance, all hinging on a disputed election in a single state, that state simply must be New Hampshire.

Who, then, are our designated potential instigators for such a hullabaloo?

Second district nominee Robert Burns says he owns and operates Burns Automation, in Bedford. It makes testing equipment for the pharmaceutical industry. According to the company’s website, the general manager is one Bill Burns. That suggests the possibility of nepotism; not that there’s anything wrong with that—that’s how our editor got his job. Burns’ campaign website claims Donald Trump selected him as “one of his delegates for the 2016 Republican National Convention.”

The Issues page on Burns’ campaign website checks all the right wing boxes: pro-guns, pro-borders, pro-forced birth, anti-government mandates…. Mostly it’s the usual, but here’s a twist: “Returning Jobs and Our Pharmaceutical Manufacturing To America.” Why export your pill-testing widgets if you can sell them in-country?

In a report from WMUR, Burns explained with Trumpian self-assurance why he won: “I mean, let’s face it, my two other opponents, one of them is a woke liberal mayor from Keene. The other is libertarian from Colorado. I’m a lifelong New Hampshire Republican.”

Burns raised less than half as much money as “woke liberal mayor” George Hansel, and squeaked by with a margin of 1,714 votes. Gotta hand it to him for frugality.

Just as New Hampshire balances its budget with money from out-of-state boozers, though, Burns had some outside help. A Democratic PAC spent $90,000 on a TV ad linking Burns to Trump. It’s a bold strategy. Let’s see if it pays off  for ‘em.

Burns may have needed help to nail down the Trumpists. For Karoline Leavitt that wasn’t a problem.

Matt Mowers, the front-runner early in the first district race, had #45’s endorsement in 2020, when he was the GOP nominee. Leavitt easily Trumped that, though. She worked in the man’s White House for two years, as a writer and assistant press secretary. Leavitt is not one to rest on her resumé, though. She is on tape saying the 2020 election was “undoubtedly stolen from President Trump.”

If elected to Congress in November, Leavitt would become, in addition to one of its members most tenuously attached to reality, its youngest at just 25. She won’t be the dumbest, though—Louis Gohmert will still be there—shortly after winning, Leavitt removed mentions of Trump from her campaign website.

Finally we have the case of former U.S. Army Brigadier General Don Bolduc—and what a case he is. Full disclosure here: our objective is in doubt because we find it hard not to like a guy who once called Governor Chris Sununu a Chinese Communist sympathizer.

Bolduc is reported to have said, during a debate, “I signed a letter with 120 other generals and admirals saying that Donald Trump won the election and, damn it, I stand by my letter. I’m not switching horses, baby.”

After winning, though, Bolduc promptly dismounted, climbing aboard another right wing nag.