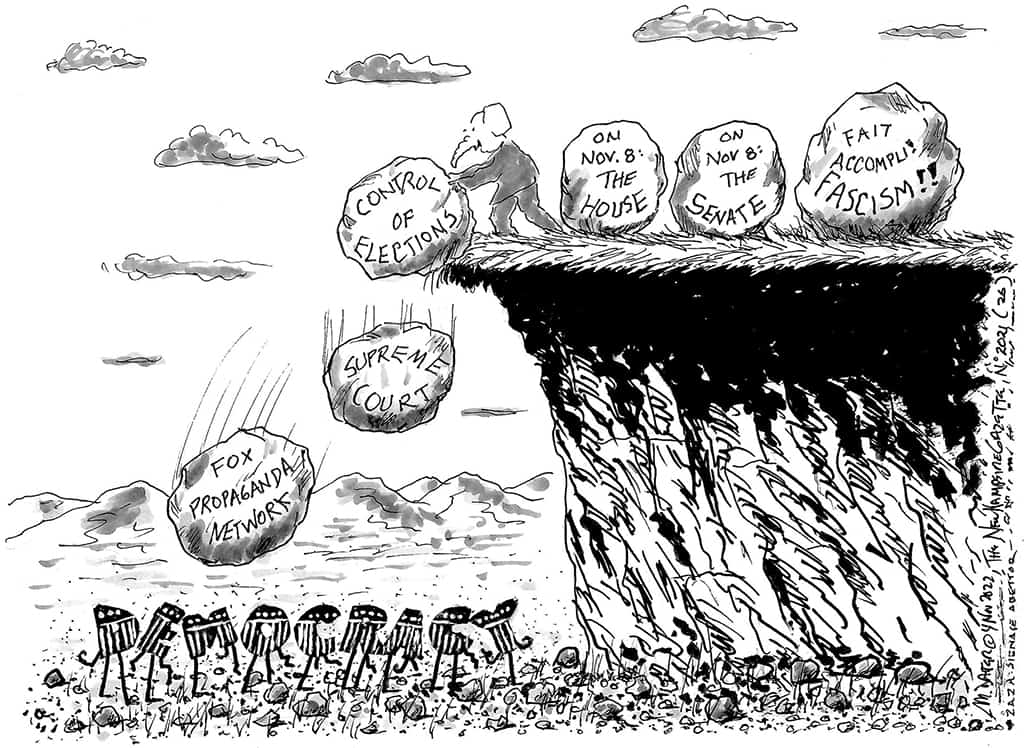 It’s an odd contradiction. From airplanes to zippers, we USAians* are quick to boast of our countrymen’s inventions. That eagerness is conspicuously absent, though, when it comes to one particular political innovation.

This mystery becomes all the more curious when one considers that fascism is enjoying a worldwide revival.

What’s that you say? It’s news to you that the U.S.A. played a central role in the development of fascism? Don’t feel bad. It was news to us, too. When you think about it, though, it’s no wonder we’re surprised.

Will Rogers†—whose career just happened to be in full flourish simultaneous with fascism’s first wave, despite the two phenomena being diametrically opposed—used to say, “All I know is what I read in the papers.”

We have many more options for getting information now, so we have fewer excuses. As it was then, though, so it is now: advertisers get anxious when certain things are made too clear.

The papers that Rogers both read and wrote for were careful not to upset the tender feelings of large advertisers. Get too controversial and—whoops!—there goes your revenue.

Here at the Nation’s Oldest Newspaper,™ though, we have honed the art of making do with less.

Bear with us, then, as we revive a few distressing but pertinent moments when the good ol’ U.S.A. led the world towards fascism. We are indebted, here, to the philosopher Jason Stanley, whose article, “One Hundred Years of Fascism” was recently published at Project Syndicate. The headline of Stanley’s essay refers, of course, to October of 1922, when Benito Mussolini marched on Rome and took power in Italy. Pope Pius XI said he was “sent by divine providence.” On the secular side, his 30,000 Blackshirts also deserve some credit.

Quoting the historian Robert O. Paxton, Stanley notes that “the earliest phenomenon that can be functionally related to fascism is American: The Ku Klux Klan…the first version of the Klan was arguably a remarkable preview of the way fascist movements were to function in interwar Europe.”

The catch phrase “America First” was adopted by the Klan in 1921. Not everyone who took up that call, though, wore white robes and a hood. Stanley reports that in that same year, the genteel pages of Good Housekeeping magazine carried an essay by Vice President Calvin Coolidge, under the headline, “Whose Country is This?” According to Silent Cal, “Our country must cease to be regarded as a dumping ground.” It should only accept “the right kind of immigration.” And what, pray tell, would the right kind be? “Nordics.”

Having seen wholesome Jimmy Stewart playing Lucky Lindy in “The Spirit of St. Louis” at an impressionable age, we were shocked to learn from Stanley’s article that our erstwhile childhood hero had actually been a rabid racist at heart. “It is time to turn from our quarrels,” Lindbergh wrote, in Readers Digest in 1939, “and to build our White ramparts again. This alliance with foreign races means nothing but death to us. It is our turn to guard our heritage from Mongol and Persian and Moor, before we become engulfed in a limitless foreign sea.”

Adolf Hitler’s admiration of Henry Ford has never really been a secret. Still, it’s sobering to learn, thanks to Stanley, how the hand of Detroit’s leading anti-semite helped to shape the Third Reich: “Hitler drew inspiration from the U.S., which, following the rise of the America First movement, had adopted immigration policies that strictly favored Northern Europeans. Looking to the early American settlers’ genocide of the continent’s native peoples in the name of ‘Manifest Destiny,’ he found a model for his own later actions in pursuit of Lebensraum (territorial expansion). And as historian Timothy Snyder shows in his 2015 book, Black Earth: The Holocaust as History and Warning, Hitler hoped to recreate the American Antebellum South’s slavery regime in Ukraine.”

When emulating structural racism in the U.S., Der Führer did not limit himself to historical examples. “Nazi ideology,” Stanley writes, “borrowed straightforwardly from the Jim Crow regime’s use of legal practice to structure the nature of citizenship. While the Allied victory eventually ended German racial fascism in 1945, America’s Jim Crow regime would survive for another generation.”

Black shirts are out these days, and red hats are in. The ideology and the general tactics, though, largely remain the same.

What does all this history tell us? That, when used in the context of political violence, the phrase “this is not who we are” is just another lie.

Political violence is, as H. Rap Brown said, as American as cherry pie. Just days ago a deranged right winger on the left coast—taking a leaf, perhaps, from a Stephen King novel—set out to bust the knees of the Speaker of the House. Thwarted, he settled for nearly killing her husband

There was a time when even Newt Gingrich might have publicly denounced this barbaric act. Our politics have now devolved, though, to the point where the Republican candidate for Governor in Arizona is cracking jokes about the incident onstage.

How did GOP Chair Ronna McDaniel respond to Lake’s gag? By blaming the assault on Democrats.

Meanwhile, our colleagues in the news racket are still reporting as if the mid-terms were a horse race between two political parties—rather than a gang of thugs unilaterally attacking the democratic process.

* We know. It is customary to refer to people living in the United States of America as “Americans.” Well, not in this Rant. We who so casually refer to ourselves as “Americans” are outnumbered, two to one, by more than 600 million other people living in 34 other nations on the two continents, North and South, which are collectively known as “the Americas.” With our own nation now so close to renouncing democracy, we just can’t muster the arrogance necessary to carry off such a stunning feat of presumption.