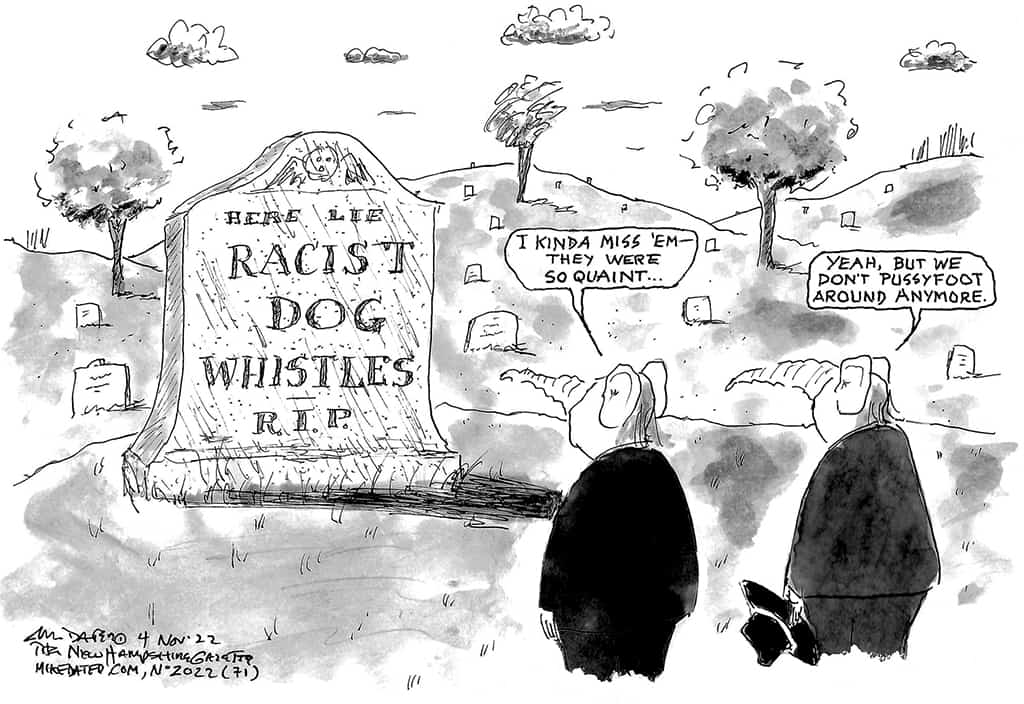 Judging from the news reports, it could have been tragic: “Rainbow fentanyl,” produced by evil drug lords, handed out like candy to unsuspecting children from coast to coast. Halloween, 2022 was threatening to become the most tragic holiday since….

Well, since New Years Day, 2000, when, after months of breathless reporting and endless speculation about civilization grinding to a halt. When 1999 ended and 2000 began, as cable TV anchors held their breath…computers kept running and the world kept spinning. It turns out the programmers running the mainframes knew their jobs and how to do them.

The true catastrophe of the year 2000 came in December, when the Supreme Court made George W.[MD] Bush President.

Now—abhorrent though it is—let us return our attention to the present, and to actual news about things that are really happening.

CNN reported two weeks ago that “An ‘unprecedented’ rise in respiratory viruses in children is overwhelming some hospitals.”

One week ago, The Hill reported that “In the United States, respiratory syncytial virus, or RSV, is creating a health care crisis in the pediatric system, which already has smaller capacity than the adult health system, placing the youngest and most vulnerable children at risk.”

RSV is “a common, and very contagious, virus that infects the respiratory tract of most children before their second birthday,” according to WebMD. “For most babies and young children, the infection causes nothing more than a cold. But for a small percentage, infection with RSV can lead to serious, sometimes life-threatening problems such as pneumonia or bronchiolitis, an inflammation of the small airways of the lungs.”

The Hill says “RSV, which usually peaks in late fall and continues through the winter, has presented early this year, with dramatically rising cases in recent weeks, creating undue strain on hospital emergency rooms, inpatient units and critical care services.”

None of these stories bother to mention the fact that three out of four children in the U.S. have had Covid by now.

Not that Covid could have knocked these kids’ immune systems out of whack, making them more vulnerable to RSV. No, if that were even remotely possible, someone surely would have warned us.

Take Senate candidate Don Bolduc, for example. As an ex-Army Brigadier General [Ret.], he’s got the security angle nailed down tight. He’s not about to let any threat go sneaking under the radar.

Not even kids who think they’re cats and pee in school-provided litterboxes.

A week ago he told an audience “Listen. I was up in Claremont. I was in Dover. I was in, you know…down in Pinkerton country…Derry. Guess what? We have furries and fuzzies in classrooms. They lick themselves, they’re cats. When they don’t like something, they hiss. People walk down the hallway and they jump out. And get this, get this. They’re putting litter boxes, right? Litter boxes. These are the same people that are concerned about spreading germs, yet they let children lick themselves and then touch everything. And they’re starting to lick each other.”

Pinkerton Academy apparently decided that in the present environment, silence might be taken for a confession. The school’s response is destined to live forever in the annals of crisis management:

“It has come to our attention that at a recent event in Claremont [CNN reported that the audio was recorded in North Hampton] Don Bolduc named Pinkerton in false claims suggesting that unhygienic, disturbing practices are taking place in our classrooms and spaces on campus. We want to assure our community that Mr. Bolduc’s statements are entirely untrue.”

On Wednesday, NBC’s Ryan Nobles spoke to Bolduc about Pinkerton’s statement. “The school has come out and said that’s completely false.” Bolduc replied, “I’m not backing down, OK? You got the wrong guy. Just because they say it? They need to prove it. Prove it.”

Only time will tell whether Bolduc sticks to his guns on litter boxes. When he first claimed school buses were bringing unqualified voters into New Hampshire to steal elections, he was quite adamant. Later, he backed off. Then last week, during an NHPR debate with incumbent Senator Maggie Hassan, he regurgitated the now-familiar line about “school buses loaded with people.”

The longer the election drags on, the more difficult to say which politician is currently holding which entirely insupportable claim.

Chris Sununu—who, as far as we know, originated the Magic School Bus myth during his first gubernatorial campaign, only to see it taken up later by Dolt #45—used to say that Bolduc was “not a serious candidate”—a refreshing surprise, coming from him.

Vote, n. The instrument and symbol of a freeman’s power to make a fool of himself and a wreck of his country.

“The capitalist class is represented by the Republican, Democratic, Populist and Prohibition parties, all of which stand for private ownership of the means of production, and the triumph of any one of which will mean continued wage-slavery to the working class.”

“The proletariat cannot vote for socialism in a bourgeois parliament because the capitalists will not permit themselves to be destroyed by their own instrument. The machinery of the capitalist state has been fashioned by the bourgeoisie to suit the needs of their class; therefore, in the achievement of its ends, the working class must contrive its own institutions.”

“These amazingly recent achievements were built on dead bodies. For centuries ordinary people struggled against absolute monarchs, rich aristocrats, princely bishops, colonisers, landowners and industrial magnates for a say in the running of their own lives. They did it on barricades, in demonstrations charged by saber-wielding mounted cavalry, in sit-ins crushed by tanks. These people are dishonored by stay-at-homes on polling day.”

The Republican Party’s regressive policies are not just unpopular, but a new study released last week suggests they are also deadly to those who live under them.

Working-age mortality rates have been rising for decades across the United States, but premature deaths are more pronounced in states where “conservative” policies predominate and less common in states that have adopted more “liberal” policies, according to peer-reviewed research published in PLOS ONE.

Policies that “expand state power for economic regulation and redistribution, protect the rights of marginalized groups, or restrict state power to punish deviant behavior” were defined by the study’s authors as “liberal,” while those with opposite aims were deemed “conservative.”

For eight policy domains—criminal justice, marijuana, environment, gun safety, health and welfare, private labor, economic taxes, and tobacco taxes—the authors scored state-level measures enacted from 1999 to 2019 on a 0-to-1 continuum, with zero representing the maximum conservative score and one the maximum liberal score.

Using annual data from the National Vital Statistics System, the authors calculated state-level age-adjusted mortality rates during the same time period for deaths from all causes and from cardiovascular disease (CVD), alcohol-induced causes, suicide, and drug poisoning among adults aged 25 to 64.

When they merged the data on working-age mortality with data on state policy contexts, the authors found that liberal policies were associated with fewer early deaths among 25- to 64-year-olds between 1999 and 2019.

Study co-author Dr. Steven Woolf, director emeritus of the Center on Society and Health at Virginia Commonwealth University, told USA Today: “As an academic who does scientific research, I studiously avoided talking about politics in my professional work…. But the data are pointing us to that as a determinant of health.”

Even after controlling for state-specific environmental conditions and demographic characteristics, the authors found that states that invested more in public education and economic security had lower working-age mortality rates than states that gutted workers’ rights, environmental regulations, and access to healthcare, including abortion.

“If a state policymaker were to say to me, ‘it’s unfair to criticize my state because I have a low-educated, low-income population,’ I would ask them, ‘why do you have a low-educated, low-income population?’” lead study author Jennifer Karas Montez, a professor of sociology at Syracuse University, told USA Today. “It’s because of your policy environment.”

Demonstrating how state policy contexts influence individual behaviors associated with premature deaths, researchers observed “especially strong associations… between certain domains and specific causes of death: between the gun safety domain and suicide mortality among men, between the labor domain and alcohol-induced mortality, and between both the economic tax and tobacco tax domains and CVD mortality.”

Darrell Gaskin, a health economist at Johns Hopkins Bloomberg School of Public Health, said that some people “like to think about (working-age mortality) as failures of individuals, that they eat too much or use drugs, but that’s all in context.”

“If we don’t have the proper regulations in place to protect people, then what happens is that they could be exploited,” said Gaskin. “We always get the promise from conservative states that we’re going to cut your taxes and regulation and make the environment better for business, and it comes with a cost.”

With the midterm elections less than two weeks away, experts say it’s important for working-age Americans to know whether they are voting for officials who support right-wing policies that increase the risk of early death or those who favor humane interventions that can help people lead longer and healthier lives.

As Woolf put it, the conservative policies associated with higher working-age mortality revolve around “helping the private sector to thrive in hopes that the economic gains would trickle down to those who need more assistance,” while the liberal policies associated with lower working-age mortality focus on improving economic fairness and social and environmental well-being.

With their efforts to impose anti-union “right-to-work” laws, ban abortions, and curtail Medicaid, and their insistence on ignoring gun violence and the life-threatening climate crisis, Republicans have firmly established themselves in the camp that is actively increasing premature deaths among the nation’s working-age population.

Although there is a wide range of positions among Democrats that stretch from more progressive to less so, lawmakers in the party are overall much more likely than their GOP counterparts to support life-affirming public goods and services of the sort detailed in the study.

The analysis precedes the ongoing Covid-19 pandemic, which has killed Americans at a significantly higher rate than people in other wealthy countries.

While the nation’s deadly for-profit healthcare model, lack of paid sick leave, and other federal policies associated with 40 years of bipartisan neoliberalism have received much blame from progressives, studies show that state-level Republicans’ lackadaisical public health measures and the GOP’s anti-vaccination propaganda have also exacerbated suffering during the pandemic.