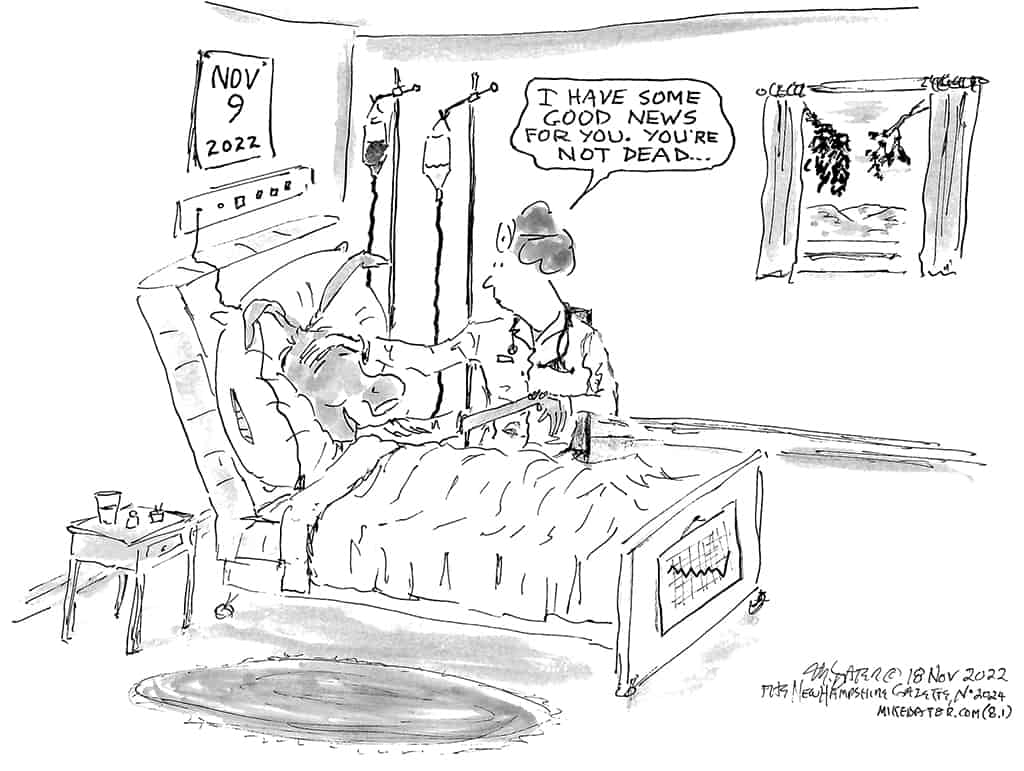 It’s…interesting. The party which acts like it owns law and order—and does seem to own the courts—now has a leading candidate for the nation’s top job who is running for the White House to stay out of the Big House.

Situations like that make it a challenge to treat the news with the seriousness it deserves. Then along comes a missile exploding in Poland and suddenly everyone on Twitter is pointing to NATO’s Article 5 and calculating the odds of a nuclear war with Russia.

We exaggerate, of course. “Everyone on Twitter” amounts to more than 200 million people. They can’t all be debating the merits of attacking the guy with the world’s largest arsenal of nukes—there’d be no one left to track that day’s school shootings.

Earth’s population just hit eight billion people. It’s shocking to realize that out of every forty, one of them is playing with Elon Musk’s new toy. We know what our excuse is—we’re running this newspaper. We wonder, though, about the rest of you.

It’s so easy to lose track of the scale of things, especially when they don’t seem to make much sense. Musk paid $44 billion for Twitter, seemingly on a whim. One user recently put that sum into perspective. If everyone on Earth gave him five bucks, he’d still be $4 billion short of Twitter’s purchase price. That’s apparently not a problem for Musk, though. He’s said to be the world’s richest man, supposedly worth $200 billion.

That would put Musk in the category of “job creator,” according to the definition made popular by former President George W.[MD] Bush. Funny how we don’t hear much about #43 any more. It’s enough to make you nostalgic for the days when disgraced former Republican Presidents used to hide themselves away in shame.

The first thing Musk did at Twitter, though, was to fire nearly half the staff. If he keeps monkeying around like that, he could end up destroying his new plaything. Don’t put it past him. This is a man, let us remember, who once fired a convertible into space with a mannequin in the driver’s seat.

We’re not complaining, mind you. If Twitter goes belly-up, our productivity will probably double. If it came with calories we wouldn’t fit through the newsroom door.

There are serious people on this planet, though, who find Twitter useful for organizing actions against oppressive governments…. Wait a minute. What are we saying? Isn’t that exactly what we’re trying to do?

If Musk simply must destroy a social media platform, why on Earth couldn’t he make it Facebook? According to CNN, one of the muckety-mucks running Mark Zuckerberg’s cash cow sent out a memo Tuesday to its fact-checkers, reminding them of a company policy: “political speech is ineligible for fact-checking. This includes the words a politician says as well as photo, video, or other content that is clearly labeled as created by the politician or their campaign.”

Allow us to reiterate, because we take perverse pleasure in stunning ourselves with random facets of reality: Facebook has third-party fact checkers who get paid to throw down penalty flags when they encounter lies. Politicians, though, are exempt. Suddenly we are reminded of General William Westmoreland’s “free-fire zones.”

The brass at CNN are in no position to sneer about low standards at Facebook. After long-time boss Jeff Zucker was pushed out over an undisclosed relationship with a co-worker, Chris Licht took over the network. Licht seems willing to do whatever it takes to make the big boss, John Malone, happy, including firing Brian Stelter. Stelter, a bright enough guy, covered the media beat, so it’s little wonder he had to go. Fun fact: in addition to owning a huge chunk of CNN, Malone holds title to 2.2 million acres of land—that’s an area twice the size of Rhode Island.

One recent bit of scintillating CNN programming: a Town Hall featuring ex-Veep Mike Pence. We can’t vouch for it because we lost the link to the original post, but there’s a rumor going ’round that the GOP platform will include a plank opposed to the hanging of Vice Presidents. We’ll just file that under the heading, “Important If True.”

Considering what we have to cover—not to mention the myriad catastrophes which we blithely skip over—there is always a temptation to just sum things up with a pithy phrase like “everything is terrible” or “we’re all doomed.” Those, too, though, are getting filed, under the heading, “Not Just Yet.” When things look that bad we just fire up Ian Dury and the Blockheads 1979 hit: “Reasons To Be Cheerful, Pt. 3.”

Last week brought a brand new reason: on Thursday, page one of the New York Post featured an egg-shaped cartoon showing “Trumpty Dumpty” atop a great wall. Down at the diner, they call that treatment “over, hard.”

This Monday, the Wall Street Journal’s editorial board wrote that “the GOP, and the country, would be best served if Mr. Trump ceded the field.” In a final rebuke it called him “the man most likely to produce a GOP loss.” When you’ve lost Rupert Murdoch…well, you’re a loser.

At press time, Republicans seem likely to gain control of the House of Representatives—regardless of the 14th Amendment’s prohibition against seating insurrectionists as Members. Once the new gang gets in we can surely expect unending investigations into weighty matters such as the contents of Hunter Biden’s laundry bag. There’s a good chance they’ll decide to impeach Joe Biden. Beyond that, considering the past performance of some of those Members, we hesitate to imagine the twisted hijinks they’ll come up with. In the meantime here’s a pair of home grown reasons to be cheerful:

Gen. Dan “Cat Box” Bolduc lost, depriving Mitch McConnell of the gavel. For failing to call for a recount, the General has been called a “traitor” and a “turncoat.”

Karoline Leavitt also lost. McCarthy will have to look elsewhere for loonies to back his shenanigans.