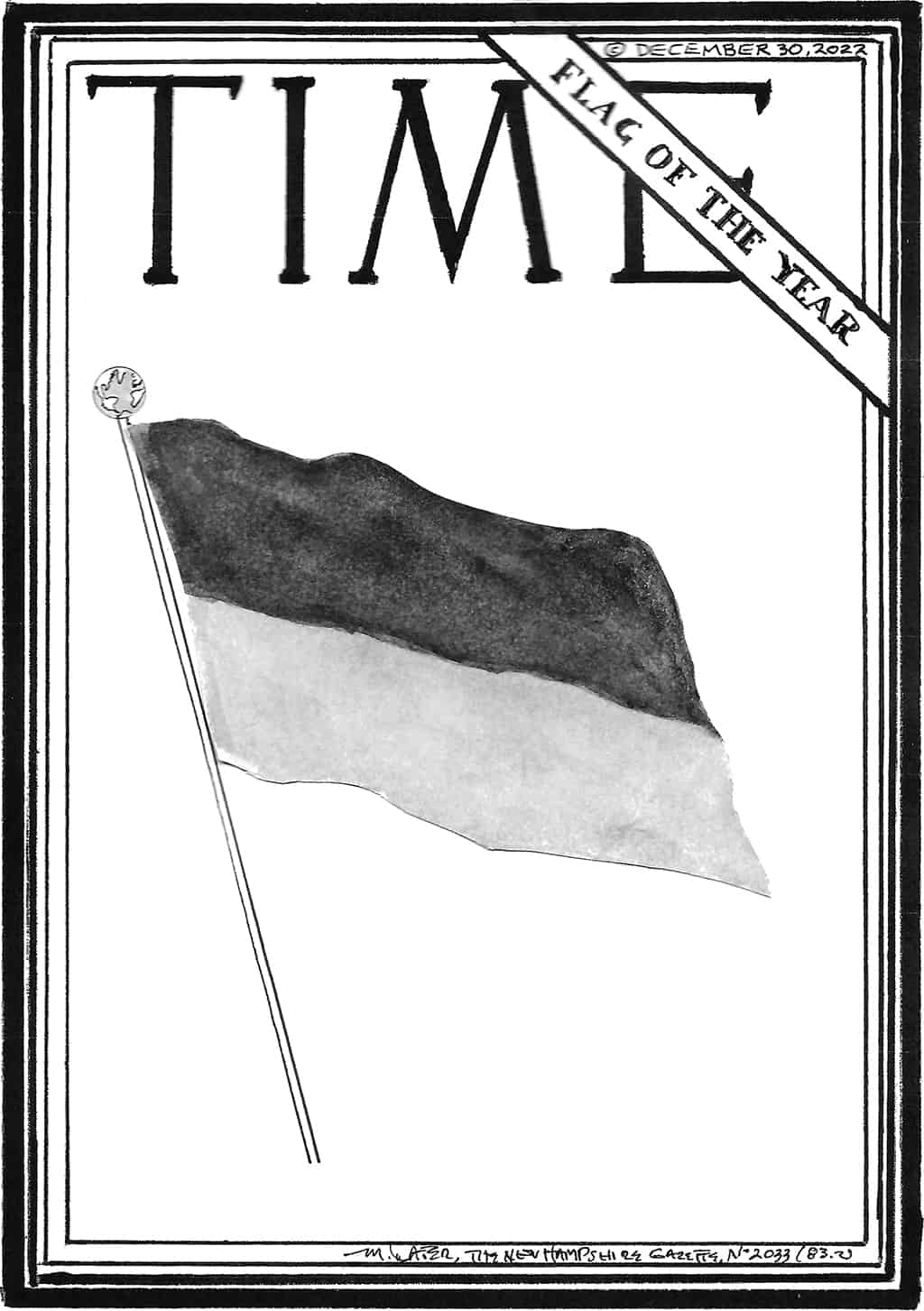 It is only natural that when chaos looms all around us, we humans—mortal, featherless bipeds, stumbling blindly, ever forward, into what we cannot know—should seek out symbols that seem to embody endurance, strength, and resolution. They offer us the hope that we, too, may survive.

So now, as each of us grapples with our own petty travails, against a catastrophic panorama of persistent pandemic, stubborn inflation, and increasingly violent weather produced by an ever more unstable climate, it is only natural that so many of us are deeply moved by images of the Ukrainian flag. Never mind that a year ago, most Americans could not have found Ukraine on an unlabeled map of Europe.

The flag’s simplicity serves its nation well. The bottom half bright yellow, representing an abundant field of grain, and a pure blue sky above. When it comes to reaching the hearts of Americans, branding, like reading, is fundamental. A fussy flag would muddy the message.

And the nation for which it stands? Though suffering and beleaguered, the world stands in awe of its courage and determination, as it fights for its life against a vicious, barbaric, and unprovoked attack.

Under the circumstances, it seems almost inevitable that the Ukrainian flag would become a universal symbol, among all the various branches of our perpetually squabbling, sometimes genocidal Family of Man, of what we most admire.

Would that everything were so simple.

Would that even this were so simple.

Would that anything was simple.

This is not to say that the consensus is wrong, but that the story we’re being told seems to leave out a lot.

Unfortunately, public discussion of current events has been trending in the same direction as the climate. Just as we’re getting used heat waves and deluges all the time, now, so we seem to want, or expect public figures to be either heroes or villains.

Now, in the case of Vladimir Putin, it’s probably safe to label him a villain. Even if we somehow learned he’s secretly kind to little old ladies and lost kittens, he’s No. 1 on our list of people we’d like to see defenestrated.

Looking at this situation, though, from the point of view of a paranoid, KGB-trained, Moscow-based despot, is it really all that hard to understand why Putin would attack Ukraine?

Wouldn’t subduing those troublesome Ukrainians be a necessary first step towards combatting whatever unknown, covert shenanigans the U.S. has been conducting in their territory?

What? Is Ukraine somehow special? The U.S. “intelligence community” is, and has been, conducting covert, plausibly-deniable operations just about everywhere else on the planet. Why would it ignore the vast, open territory on Russia’s southwestern border?

As usual, when discussing current events, we Americans tend to see last year as ancient history. Let us instead go back a century—we’ll get a clearer view.

Just as the Soviets were our allies in World War II, so were the Russians in World War I—up until March of 1918. Then the Russian Soviet Federative Socialist Republic, formed just months earlier after the abdication of Tsar Nicholas, bailed out by signing the Treaty of Brest-Litovsk with the Central Powers, Germany, et. al.

The Allies found this so aggravating that they sent more than a hundred thousand troops to intervene on the side of the anti-communist White movement in the Russian Civil War. With the benefit of hindsight, the results of the intervention were to discredit the Whites as puppets of the west, thus strengthening the Bolsheviks.

Yes, that’s right. The result of the intervention was exactly the opposite of what had been intended. You might think that would serve as a lesson, but, yet again, you would be wrong.

So, thanks in part to anti-communists, the Russian Revolution succeeded in putting into practice what had heretofore been just an ideological theory.

Call it a coincidence if you like, but as Russia went communist, Italy and Germany were going fascist, creating societies that were, in effect, meldings of gangsterism and autocracy. But hey—at least they weren’t communists, right?

Meanwhile, most Americans, disillusioned after “saving the world for democracy” in the trenches of France, were content to revert to the norm and let Europeans settle their own squabbles.

Pearl Harbor put the kibosh on that, of course. By the time the war was over, Europe’s industrial base had been destroyed, and American hegemony established. Evolving from the wartime OSS, the CIA took it as its mission to make sure things stayed that way—whatever it took. If the Pentagon could hire a useful ex-Nazi scientist like Werher von Braun, why shouldn’t the CIA put Reinhard Gehlen to work?

Gehlen, a Wehrmacht general, was Hitler’s chief of military intelligence on the Eastern Front until April, 1945. After VE Day, he was recruited by the U.S. Army Intelligence to head what was called the Gehlen Organisation—which largely amounted to ex-Nazis, working for an ex-Nazi, to spy on communist Eastern Europe for the capitalist West. The Gehlen Organisation later evolved into West Germany’s Federal Intelligence Service.

None of this is meant to exonerate Vladimir Putin for the least misdemeanor, never mind his myriad crimes against humanity. Germans have a word, backpfeifengesicht, which means, “a face in need of a fist.” Russians need a word that means, “a man in need of a window to the thrown out of,” so it can be used on him.

After wars shot through with lies in Vietnam, Grenada, Panama, Afghanistan, and Iraq—and, clandestine quasi-wars in Chile, Nicaragua, Iran, and God only knows where else—must we always be kept in the dark?