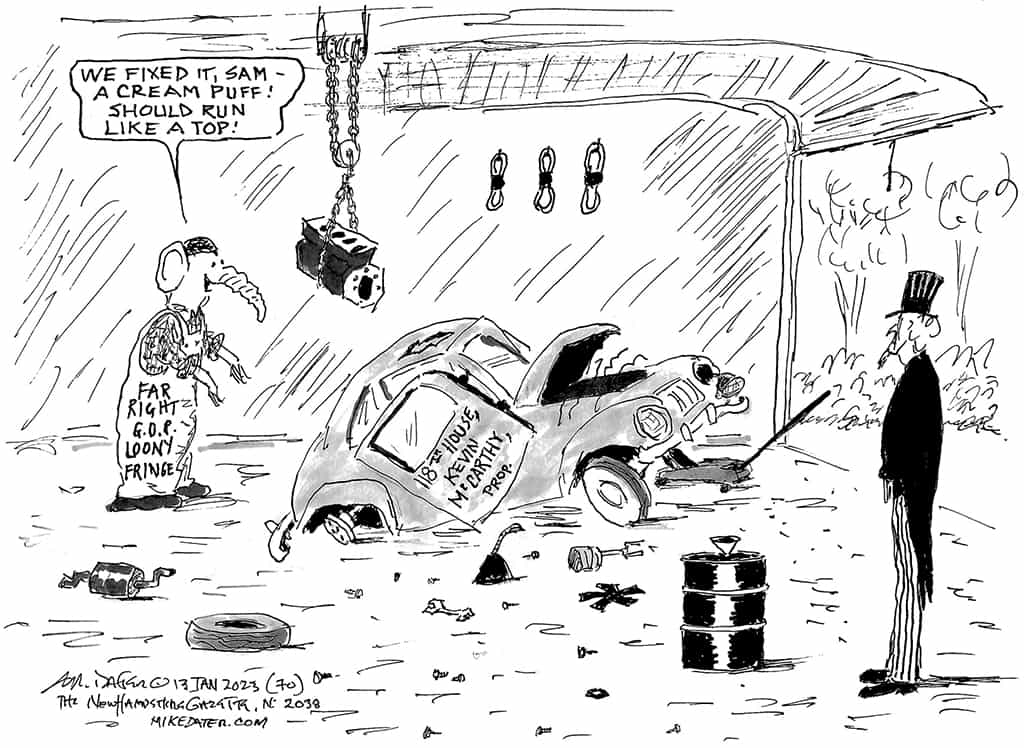 Well, Republicans have gotten their meat hooks on the House of Representatives. God help the Republic as they set to work.

No one is more likely than a Republican Member of Congress to posture as the soul of common sense, that elusive quality best summed up by the adage, “If it ain’t broke, don’t fix it.”

Yet here we are, just a few days into the 118th Congress, and the GOP is clearly taking a different tack. Perhaps they’re trying to plagiarize Disney’s movie “Wreck-It Ralph,” but got lost in the plot. The things they say they’ll fix are those few that are still working—which leaves all their promises sounding like threats.

We do not mean to imply that the U.S.A. was in great shape when the Democratic-led 117th Congress turned out the lights in December. Far from it. Everywhere we look, we can see the evidence that this country isn’t working right now.

Not for the people, anyway. The people themselves are the evidence—literally. Except in the most extraordinary cases, their bodies are hostage to our “health care system.” Despite all the non-profit feifdoms embedded within it, the system overall is profit-based—and with a vengeance.

It might best be described as a politically-connected protection racket. It’s a beautiful racket, too. There’s no need to hire a bunch of thugs, to beat up people who won’t cough up. Whether you think it was bestowed on you by God, by evolution, or through Intelligent Design, your carcass will find ways to betray you.

So, to paraphrase Bob Dylan, you’re gonna have to pay somebody—plenty. A study done last January of health care costs in a dozen wealthy nations found that Americans pay more than anyone else, and twice as much as the average, per capita.

No wonder 47 percent of Americans reported having difficulty paying their medical bills, according to a Kaiser Family Foundation survey taken earlier this year.

If you find the cost of healthcare distressing, wait until you see the death toll. In a study of maternal mortality in ten comparably-wealthy countries, we came in at No. 1!

The trouble is, that’s a bad thing, and no one else even came close. American women are 2.8 times as likely to die in childbirth than Canadians, who came in second, and 5.28 times as likely as the average.

Now, let us briefly ask, which American women are we talking about? Compared to Hispanics and Non-Hispanic Whites, Non-Hispanic Black women are 2.97 times more likely to die in childbirth. Alarming, indeed—just think how much worse things might be if structural racism was real!

Speaking of the British, an article published in The Guardian in 2021 highlighted the consequences of having a health care system that treats teeth like luxuries:

“The disparities in oral health in the U.S. are prevalent among racial and economic lines, with Black, Hispanic and lower-income Americans experiencing higher rates of tooth decay, gum disease and oral cancer, as more than half of Americans avoid or delay healthcare, including dental care, because of high costs.

“The importance of oral health is directly linked to overall health. Dental problems are linked, or suspected to be linked, to cardiovascular and other serious health problems such as diabetes and Alzheimer’s.”

That’s a fact that hits all too close to home. This paper lost one of its best friends of the late 20th century—an otherwise-robust former Marine, only about 50—to a heart attack that may well have been caused by periodontal disease.

According to the Great Myth of American Exceptionalism, the House of Representatives is the branch of government which is supposed to be closest to the people. Every Member must ask, every other year, for the opportunity to stand up for them, in the nation’s Capitol. And this is what we get.

It is impossible these days even to imagine Congress passing a bill that would make affordable health care available to the people.

It would be easier to picture the U.S. Congress meeting on the floor of the New York Stock Exchange, beginning every morning with a bow towards the balcony, all the Members pledging allegiance to a hologram of Milton Friedman with a gold crown on his head.

Hell, if they did do that, how would our lives be any different from the way they are now?

The musician and freelance troublemaker Tom Morello got to the core of the problem:

“America touts itself as the land of the free, but the number one freedom that you and I have is the freedom to enter into a subservient role in the workplace. Once you exercise this freedom you’ve lost all control over what you do, what is produced, and how it is produced. And in the end, the product doesn’t belong to you. The only way you can avoid bosses and jobs is if you don’t care about making a living. Which leads to the second freedom: the freedom to starve.”

Fix that problem? Hell, no. The GOP is going after Hunter Biden’s Laptop of Doom. Here comes the Fat Cat Tax Protection Bill, the Louis DeJoy Now Owns the Post Office Bill, and the House Committee to Permanently Proctologize the FBI.

You know your country’s in trouble when the best you can hope for is the U.S. Senate riding to the rescue with a “No” vote on this junk.