Wednesday, May 5–Harold Frayman asked yesterday in a comment, “where did the chickenhawks go?” We replied, “Our friends the chickenhawks are in limbo while the alleged editor tries to find the time to upload them all.” 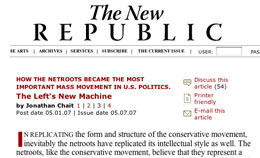 Then this morning we stumbled across Jonathan Chait’s piece in The New Republic, titled “The Left’s New Machine: How the netroots became the most important mass movement in U.S. politics.”

In that article, Chait wrote that “One of the netroots’ distinctive contributions to American political discourse is the extremely promiscuous use of the insult ‘chickenhawk.’”

The New Hampshire Gazette is the home of the original Chickenhawk Database. As such, it is arguably responsible for injecting the concept into the noosphere.

Coming as it does right after Harold’s inquiry, on the fourth anniversary of “Mission Accomplished,” in the context of the standoff between the White House and Congress over war funding versus withdrawal, we find Chait’s characterization of the term somewhat provocative.

Unfortunately, we don’t have the time right now to fully address this question; we are preoccupied with getting out next issue (May 4) ready for our date with the printer tomorrow. Assuming we survive that routine ordeal, we’ll have more to say.

45 thoughts on “The Chickenhawk “Insult””