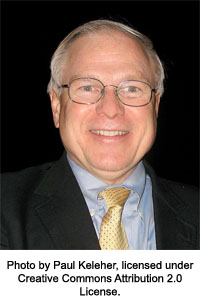 Friday, August 14, 2009 — Howie Carr allowed a caller named “Debbie” to commit what seems to us like a slander on his radio show Tuesday [visitors are invited to employ The Google to find a link] against one of the Seacoast’s most beloved musical ensembles. Thanks to our pal Dave at The Wire for forwarding the following audio clip:

Here’s a transcript:
Guitar intro …
Announcer: “Broadcasting from the New Balance World Headquarters Building, this is the Howie Carr Show.”
Carr: “Are you glad you went, Debbie?”
Debbie: “You know what? Sometimes you’ve got to stand up and be counted, Howie. And I look at it, that’s what I did today. I stood up and I was counted. And I think I was a little bit unnerved looking at the machine he used to get those people in there. Busses, furniture, food — even the Leftist Marching Band. I think we need to keep the pressure up …”
Carr: “What?”
Debbie: “Seriously. The Leftist Marching Band.”
Carr: “That’s what it calls itself?”
Debbie: “Yes. And they were no spring chickens, either.”
Carr: “Where the hell were they from?”
Debbie: “Ahh, you know what? I really didn’t want to know. ‘Cause they, generally, were an unpleasant bunch. So I didn’t want to mingle.”
Carr: “The Leftist Marching Band.”
Debbie: “Yeah.”

The following four minute video shows The Leftist Marching Band performing in Market Square on July 5. This is unpleasant?

Debbie, we’ve seen unpleasant. Unpleasant is a friend of yours: