Final Update; 9:00 p.m. — Inside the Portsmouth High School gym, undercover Moslem terrorist Barack Hussein Obama outlined his plan for reforming Americas health care system by increasing efficiency and eliminating billions in needless subsidies for insurance companies, while improving care for all, then gave thoughtful and lucid answers to a broad array of questions

Meanwhile, outside the gym, this mild-mannered patriotic American conveyed a certain lack of enthusiasm for his proposals:

Update; 3:15 p.m. — MSNBC displays its quaint naivete about the laws of the state of New Hampshire, as a resident lives out the true meaning of the libertarian creed: what’s the point of the right to bear arms, if you can’t do so in the middle of an already tense situation, while waiting for the President of the United States to arrive? 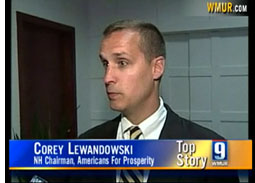 Update; 11:20 a.m. — Air Force One is due to land in about half an hour. If it does a flyover of Gazette World Headquarters, we may be able to grab some video, or a photo. But with a paper due at the printer’s in about 48 hours, we’re just not in a position to mingle with the mob over at the High School.

Seacoast for Change and SEIU Local 1984 are sure to be well represented. But the yea-sayers aren’t going to be the story today.

We see from WMUR’s coverage that Jack Kimball and his Granite State Patriots will not be bearing the entire burden of representing the forces of reaction. Corey Lewandowski, the NH Chairman of Americans for Prosperity (AFP) says he expects “upwards of 1,000 people” to show up.

It’s going to be an interesting matchup, with Americans for Prosperity — whose “About AFP New Hampshire” page on their website is helpfully blank — carrying the banner for the Astroturf wing, while Kimball’s Granite State Patriots represents the more home-grown variety of troglodytes. 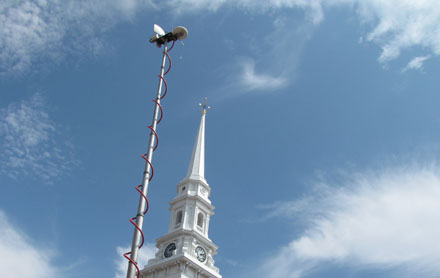 Tuesday, August 11, 2009 — For a week or more reports came in from hither and yon about hostile crowds angrily shouting down their Congressional representatives during “town hall” meetings being held to discuss health care reform. Then the White House announced that Barack Hussein Obama, the alleged President, would hold the Mother of All Town Halls on the topic, right here in River City.

Fine. Fine and dandy. If we can’t deal with it, who can? We’ll be doing this on our own terms, though. What’s the point in taking the Nation’s Oldest Newspaper™ away from The World’s 9th Richest Man if you can’t dictate your terms? We won’t be lurking in the corridors of Portsmouth High School. We’ll be reporting from the safety, comfort, and convenience of Gazette World Headquarters, as any sane editor would do if he or she were lucky enough to be in our position.

We have no way of knowing what the Secret Service is focusing on. As far as we can see, though, the local loyal opposition has coalesced around Jack Kimball, leader of the Granite State Patriots.

According to Obama’s Deputy Press Secretary Bill Burton, “[t]here will be about 1,800 folks in the audience.” Susi Nord, though, from NH Peace Action, has e-mailed that “[t]here will only be space for about 100 people on-site at the High School.” Details, details …

4 thoughts on “Another Report From Ground Zero”