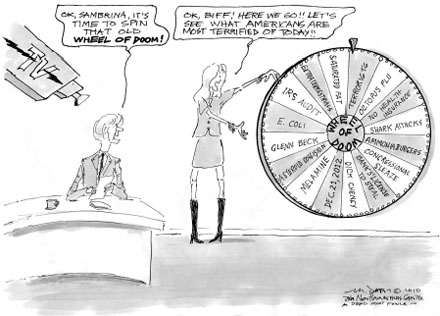 Unfortunately, in response to that government intervention in free trade, those corporations began importing childrens’ toys containing cadmium. Cadium is not just poisonous, it is also carcinogenic. Children exposed to sufficient amounts of cadmium will not grow up intellectually-impaired — they’ll die of cancer.

“Birds and planes are fighting for airspace,” an advisor to the Federal Aviation Administration told the Associated Press (AP), “and it’s getting increasingly crowded.” In 2009 alone, the number of such collisions “could top 10,000.” The AP timed its story to coincide with the lead-in to the one-year anniversary of “Sully” Sullenberger’s near-miracle ditching of an Airbus A320 in the Hudson River on January 15th, 2009, following an attack by a flock of rogue Canada geese.

If the geese don’t get you, Grampa might. The Wall Street Journal reported on January 11th that “since 2002, TSA screeners have found more than 200 canes concealing either swords or knives.” Many of these elderly sword-cane carriers have professed they were unaware of the lethal nature of their walking sticks.

And as if any more discouragements to travel were needed, on Saturday, January 9th there were 69 murders in Mexico. Twenty-six of the killings took place in Ciudad Juarez, just across the border from El Paso, Texas.

Staying home may not be any safer. Another AP story outlined a San Diego college professor’s study which indicated that among American students, anxiety and mental health issues are five times more prevalent than they were during the Great Depression. Almost one in four students was found to suffer from “psychopathic deviation.” This was said to be a milder form of psychopathic behavior and was defined as “having trouble with authority and feeling as though the rules don’t apply to you.”

The Conference Board, a business organization, has been monitoring the level of job satisfaction among American workers since 1987. According to the Board’s latest survey, job satisfaction is now at its lowest point since the tracking began.

The website CareerCast.com recently ranked the 200 best and worst jobs in the U.S., based on five criteria: work environment, pay, opportunity, physical demands, and stress. The job of actuary topped the best list. Roustabout was at the bottom. Much to our surprise, reporter was down there at 184, and photojournalist was 189 — roofer and nuclear plant decontaminator ranked higher!

On Tuesday, the government announced that one American in eight is on food stamps. In Brevard County, Florida, things are so tough that Sylvester Jiles was convicted January 7th of violating his parole by trying to break into the county jail.

But these are pedestrian concerns. On January 6th The Telegraph reported that “the Earth could soon be wiped out by the explosion of a star more than 3,000 light years away.”

T Pyxidis is actually a pair of stars, one being a white dwarf that sucks in matter from the other and periodically explodes in what’s called a “nova.” T Pyxidis produced novas about every 20 years from 1890 to 1967, then ominously stopped.

The Telegraph’s story quotes American Astronomical Society scientists who said a blast is 20 years overdue, and the star “is set to self-destruct in an explosion called a supernova with the force of 20 billion billion billion megatons of TNT.”

“The blast from the thermonuclear explosion could strip away the Earth’s ozone layer” — so we could have been using aerosol cans all this time, and it wouldn’t have made any difference. That’s rather tragic.

Impending doom is pretty familiar stuff in the news racket, but this is starting to get alarming. Is The Telegraph going off the deep end here? What does the Scientific American have to say about this?

“Supernova star too close for comfort,” the highly-respected magazine reported. “Astronomers have identified a ticking time-bomb in space that lies perilously close to the Earth, they revealed today. The star, called T Pyxidis, looks set to explode as a supernova with the force of 20 billion billion billion megatons of TNT. But it lies less than 3,260 light-years away in our own galaxy — close enough in cosmic terms for a blast to have a possibly devastating impact on our planet.”

GAAAAAH! Can this really be happening? Well, in a word, no. We are all gonna die, but probably the old-fashioned way — mostly one at a time.

Thank Gore for the Internet. Discovery.com’s Ian O’Neill looked into our looming demise and found that Villanova scientist Edward M. Sion had “miscalculated the damage that could be caused by a T Pyxidis supernova [and] used data for a far more deadly gamma-ray burst.” A week after O’Neill’s debunking, though, neither The Telegraph nor the Scientific American had corrected their stories.

T Pyxidis might go supernova, but it is too far away for a supernova to do us any damage and too small to produce a gamma ray burst. So we can all go back to worrying about keeping our jobs and paying the rent or making the mortgage. 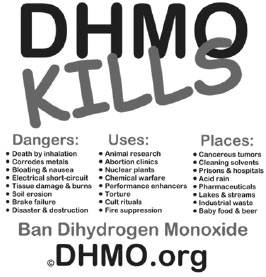 During our feverish search for reassurance, we did run across something that made us a little uneasy: a chemical that is colorless, odorless, and ubiquitous.