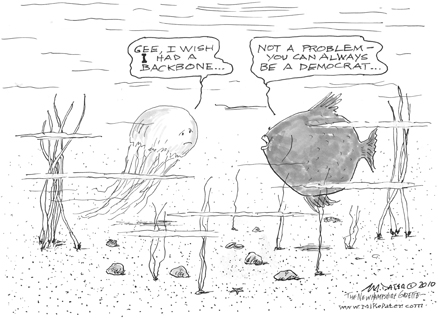 Just to pluck a factoid at random out of the open sewer which passes for current events these days, we see that Anthem Blue Cross California is raising its rates on 700,000 customers by as much as 39 percent. It does this even though its parent company, Wellpoint, posted a record profit of $2.7 billion last year. [1]

Anthem’s rate hike had been scheduled to take effect on March 1st, but out of the kindness of its alleged heart, or perhaps to forestall a seige of corporate headquarters by mobs of pitchfork-bearing peasants, the increase has now been postponed for sixty days.

Anthem’s President Leslie Margolin defended the rate hike at a hearing before lawmakers in Sacramento on Tuesday, saying that “profits in the range of 2.5 to 5 percent I think are reasonable profits,” according to a report posted at NBCLosAngeles.com.

“The problem is a much bigger issue involving soaring medical costs and a broken system,” Margolin said, “especially with younger and healthier customers forgoing insurance during the recession, leaving older and sicker people to share the cost of individual coverage.”

Anyone can see where this death spiral will lead: Anthem will be down to one last multi-billionaire patient, his defibrillator draining all the power produced by the nuclear reactor at Diablo Canyon even as his skyrocketing health insurance premiums consume his grotesquely-swollen net worth.

Meanwhile, back down among the plebians, perhaps Anthem’s rate hike delay will give the average policy holder sufficient time to sell enough plasma to pay premiums.

Another potential benefit of the delay: it might give the dust from another hearing time to settle.

According to the LA Times, California’s Insurance Commissioner Steve Poizner told lawmakers on Monday that Anthem had violated state law an average of 4.5 times per week over the period from 2006 through 2009, mostly by “misrepresenting” policy provisions to customers and failing to respond to the Department of Insurance in a timely way. [“Misrepresenting” is a term frequently used by Associated Press papers like the LA Times as a substitute for “lying about.” — The Ed.]

According to leading Republicans, though — Rush Limbaugh and Glenn Beck, for example — all this adds up to Americans enjoying the best health care system in the world.

What’s more — unless Congressional Democrats experience a “moment of clarity” and suddenly recall that as members of the species Homo sapiens they almost surely came into this world fully equipped with functioning spinal columns — this is the health care system America will be stuck with for the forseeable future.

Tempted though we are to lay this whole wretched mess at the Gucci-clad feet of the Republican elite, we have to give some credit to the Democrats: the party, as they like to remind us, of Jefferson and Jackson. For almost forty years they have been giving their constituents a somewhat milder version of what Jefferson gave his slaves and what Jackson gave the Native Americans, and for about the same reason: because they could.

Let us briefly review. In 1973, the highest-earning one percent of the population received eight percent of the nation’s total annual income. Since that time two idées fixes have dominated our national economic debate. Both were pushed primarily by the Republicans, and neither was effectively resisted by the the Democrats.

One idea was that by cutting taxes, especially on high income-earners, we would stimulate the economy and generate new jobs. The other was that regulation stifles economic growth and leads to economic stagnation, so we should deregulate to accomplish the opposite.

Two Republican Presidents, Ronald Reagan and George W. Bush, succeeded in getting major tax cuts through Congress — using the process known as reconciliation. Meanwhile, deregulation of the financial industry allowed Wall Street’s wizards to develop all sorts of fancy new products for those high-earners to dump their money into — products that offered a higher return than creating some lousy manufacturing jobs for a bunch of Democratic working stiffs.

Take those brilliant ideas, throw in a few foreign wars paid for with IOUs written in Mandarin and what have we got?

A federal government starved to the point where it’s nearly small enough to drown in a bathtub; non-supervisory American workers whose take-home pay, adjusted for inflation, has not risen but dropped; and, as of 2006, the nation’s highest-earning one percent of the population rakes in almost 23 percent of our total annual income. [2]

Now, it is no surprise that the wealthy have done so well under Republican policies. As the snake said in the fable, “You knew what I was when you picked me up.” The surprise is that with all the devastation this deranged brand of “conservatism” has wrought, hardly a Democrat can be found who will even acknowledge that this has happened.

Democrats could be beating the Republicans like a rented mule using their own damned record for a club and using reconciliation to pass a health care bill with a strong public option.

We’re betting that won’t happen, and hoping to lose the bet.

1 — At a Congressional hearing on Wednesday Wellpoint’s CEO Angela Braly said the company had paid 39 executives more than $1 million each, and shelled out an additional $27 million for “lavish executive retreats,” according to a story by McClatchy reported late on Wednesday.

2 — These inconvenient facts, and many more like them, can be found in The Looting of America: How Wall Street’s Game of Fantasy Finance Destroyed Our Jobs, Pensions, and Prosperity, and What We Can Do About It, by Les Leopold, published in 2009 by Chelsea Green.