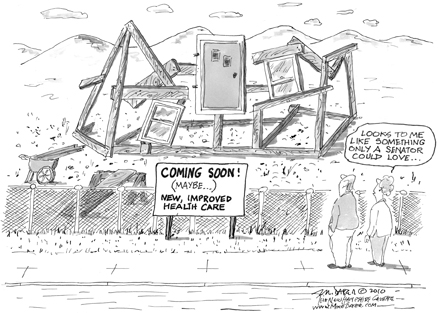 Quite frankly we have been ambivalent about the watered-down health care proposal being pushed by the White House.

The status quo has got to go, that much is clear. Under our present “system,” the lack of health care insurance is killing almost as many people every year as automobile accidents. For that dubious service the nation pays at least half again as much as it would if everyone were covered.

In a sane political system the Democratic Party would stand up and say, “This is what we’re for: a well-managed single-payer system providing health care for all. The rest is just details; let’s get to work.” But noooo ….

This over-simplified analysis makes it appear that the Democrats are appallingly timid — which of course they are. In their defense, we must point out that their fears are not ungrounded.

The political system in which the two major parties grapple for power is itself embedded in a much larger system, for which we can offer no better name than “the infosphere.”

Though neither party could hope to control the infosphere, it does have a general bias that favors the Republicans, because the Republicans have more openly and abjectly linked their fortunes to those of the corporations.

The Democrats, burdened by their theoretical fealty to “the people,” have to play a much more nuanced game. They have to argue the merits of their case — assuming their case has any merits — in a language that means different things to different people. In extreme cases, a proper noun — Obama, Pelosi, or Reid, for instance — can be a person’s name, as when spoken by a Democrat, or a vile obscenity, as when uttered by a Republican.

Sadly it would not be practical to outfit every Democrat with a chyron delivering a running commentary across his chest to counter the free-floating distortions and outright lies that permeate the infosphere. Similarly, Republicans cannot be fitted with air horns that sound whenever they state as accepted fact some hair-brained theory or concocted statistic.

The situation is dire; but, for humans, the situation properly considered is always dire. There is one small glimmer of hope out there: this thing may be settled in a matter of weeks. If health care reform passes, we will have a deeply flawed but significantly improved healthcare system.

And here’s another great benefit. Rush Limbaugh said recently that if health reform passes “and it’s five years from now and all that stuff gets implemented — I am leaving the country. I’ll go to Costa Rica ….”

Sorry, we couldn’t get the last part of that quotation — it was drowned out by an air horn.

* In laying out this theory, we feel obliged to describe our own place in the infosphere: The New Hampshire Gazette would be an obscure microbe infesting the interstices between the scales of a handful of herring.