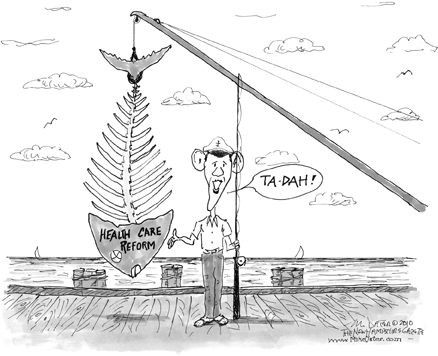 In a vote that is truly deserving of the term “historic” — its antecedents go back 98 years* — last Sunday the House of Representatives passed legislation that substantially reforms America’s health care system, depending on what the meaning of the word “reform” is.

The legislation will force millions of Americans to become customers of the very insurance corporations that have been screwing the nation for Lo, these many years. Thus the festering sore at the heart of our alleged health care system is not just being preserved, but, like Dick “Still Dick” Cheney’s alleged cardiac unit, it is being strengthened.

One might think that the Republican party — pro-business to a fault, and then some — would be cheering over this mass conscription of new customers for their friends in the health care racket, but no. Because some of the worst features of the present system, such as throwing sick people to the wolves when they no longer generate profits, will finally be expunged, this half-hearted package is being treated by the GOP as the single most terrible act of tyranny since Stalin collectivized Soviet farms.

There is, of course, one perfectly legitimate reason for the GOP to be so upset. As the minority party, the Republicans expected to gain a number of Congressional seats in the upcoming mid-term elections. They had hoped that by stopping health care reform, they would gain far more, perhaps enough to cripple the Democrats for decades to come. The GOP bet everything they had on this, and they lost. And, as George C. Scott, playing General Patton, once growled, “Americans love a winner and will not tolerate a loser.”

Weak as this reform is, it does have some popular support. Their incessant cries of impending doom notwithstanding, some Republicans probably understand that. Furthermore it was clearly brought about by the Democratic Party, acting alone against the implacable resistance of the Republican party. According to a Pew Research Center study released a week ago — before this measure passed, and when it looked quite possible it would fail — Pew found the approval ratings for Democratic Congressional leaders was at 31 percent. That’s pretty bad, but it’s better than the Republican leaders’ dismal 25 percent.

Obama signed the bill into law on Tuesday. That same day, after a year’s worth of Republican lies about “death panels” and the government peering over your doctor’s shoulder, USA Today released a poll saying that by a margin of 49 percent to 40 percent, Americans felt it “was a good thing,” and not a bad thing, that the bill had passed.

The Republicans may or may not have hoist themselves on their own petard; the outcome of that political struggle lies somewhere in the unforseeable future. For now, while the smoke still lingers, the GOP’s generals are walking across the battlefield, doing their best to shoot the wounded.

Senate Minority Leader Mitch McConnell (R-KY) has already begun dangling a promise to “repeal and replace” before the Republican faithful. His odds on this front are no better than on the GOP’s long-standing vows to pass a flag-burning Amendment and to outlaw abortion, but that’s no matter — as with those issues, the GOP can use this one as a way to wheedle campaign contributions out of the gullible.

House Minority Leader John Boehner (R-OH) seemed particularly incensed by the bill’s passage. Before the vote, when he could no doubt see the writing on the wall, he stood at the lectern on the floor of the House shouting rhetorical questions to his Republican cohorts, and answering them himself with a full-throated “Hell no, you can’t!” It would be churlish and petty to suggest that the Leader’s visceral anger derived in any way from the ten percent tax on indoor ultraviolet tanning services which will go into effect on July 1st … but we won’t let that stop us.

Rep. Louie Gohmert (R-TX), outraged by the bill’s passage, has proposed what he sees as a remedy: pass a Constitutional Amendment to put an end to the popular election of Senators. To anyone familiar with the rank corruption of the Senate in the decades before the 17th Amendment, this might seem about as sensible as putting narcotics enforcement in the hands of the Sinaloa Cartel. In all fairness, it must be remembered that Rep. Gohmert was educated exclusively in Texas.

For all of its whining the GOP got its way, as usual, on one particular issue: its tender-hearted followers will be spared the horror of seeing their tax dollars used to pay for abortions for low-income women. Despite this deference, a number of conservative states’ Attorneys General are threatening to sue the Federal Government on the grounds that the Constitution does not authorize said Government to mandate that citizens have health care coverage. Few give that effort much of a chance for success.

Those states ought to be careful. Objecting to the use of U.S. tax dollars to kill the innocent could cut two ways. How many Americans object to blowing up wedding parties in Afghanistan? Spare their feelings, as you do the Right Wingers, and the Pentagon’s budget will take a big hit.

* In 1912, Theodore Roosevelt campaigned as the Progressive Party nominee for what would have been his third term as President. The Party’s platform called for “the protection of home life against the hazards of sickness, irregular employment and old age through the adoption of a system of social insurance adapted to American use ….” If we accept Roosevelt’s effort as the starting point, then the fight for health care reform has been going on for 44 percent of the time that the U.S. Constitution has been in effect. Ironically enough, Roosevelt is the Manchester Union Leader’s favorite icon of conservatism, apparently due to the fact that the paper’s late publisher William Loeb had, as a baby, been bounced on Roosevelt’s knee.