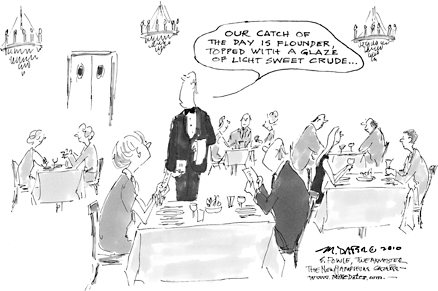 If things had gone as planned last Monday, the Federal officials in charge of regulating offshore oil drilling would have been handing out awards in Houston. Among the three contenders for the Minerals Management Service’s Safety Award for Excellence, which recognizes “outstanding safety and pollution prevention performance,” was the British oil giant BP.

Due to a mishap, however, the Minerals Management Service (MMS), a bureau of the Department of the Interior, announced last Friday that it was postponing its annual Industry SAFE Awards Luncheon. In limbo, along with the luncheon, are the Gulf Coast’s oil, tourism, fishing, and shipping industries.

At mid-week only three things of any note were going on in the Gulf. Two were fairly obvious: the desperate effort to plug the holes allowing 210,000 gallons of oil a day to spill from an oil well a mile beneath the waves, and the struggle to contain the millions of gallons that have already escaped.

Considerably less apparent, but no less real, was the tricky task facing the nation’s corporate news media — explaining this most recent catastrophe to the public without making one thing obvious: the web of relationships among the “responsible” parties, Congress, regulators, and corporate officials, made a spill like this inevitable.

Deepwater Horizon, an offshore oil drilling rig about forty miles east-southeast of the mouth of the Mississippi, blew out and caught fire on April 20th. The rig belonged to Transocean Ltd., and was under lease to BP. Transocean says it is “the world’s largest offshore drilling contractor.” BP is the world’s fourth largest company, period. They may dominate their respective markets, but together they could not control the elements. Support boats fought the fire for more than a day, but on April 22nd Deepwater Horizon sank. Seventeen of the 126 people on board were injured; eleven are still missing and presumed dead.

The next day Coast Guard Rear Admiral Mary Landry told ABC News, “We’ve been able to determine there is nothing emanating from the well head.” Over the course of the next week that statement rapidly became increasingly inoperative. On the 25th, news reports were saying that as much as 1,000 barrels, or 42,000 gallons, might be leaking per day. By the 28th, that figure had been revised upwards by a factor of five to 210,000 gallons a day.

On the 30th, the Mobile [AL] Press-Register reported that it had acquired a National Oceanic and Atmospheric Administration memo saying that sand carried by the escaping oil could erode the riser pipe, and if it “deteriorates further, the flow could become unchecked, resulting in a release volume an order of magnitude higher than previously thought” — meaning the spill rate could climb to millions of gallons per day.

At mid-week, BP was attempting to lower containment structures over the leaks. If that doesn’t work, it appears the only option left may be to drill new wells to relieve the pressure, an effort that could take months. In that case, the Deepwater Horizon spill could surpass the Exxon Valdez as the nation’s worst oil spill.

Terrible though it is, the Deepwater Horizon event can’t be called a true “worst-case scenario.” That might be the BP Atlantis. Located 200 miles south of New Orleans in water a thousand feet deeper, the BP Atlantis is the world’s largest offshore oil rig. The British paper The Guardian reported April 27th that BP is under investigation for failure to keep a full set of required documents on BP Atlantis, documents that are “vital to shut down the platform properly in case of an emergency.”

Looking on the bright side, perhaps the Deepwater Horizon mishap, following as it does the 2005 explosion at BP’s Texas City oil refinery that killed 15 and injured 150, and the 267,000 gallon spill a year later at BP’s Prudhoe Bay pipeline, will prompt the company’s management to become more safety-conscious before BP Atlantis goes the way of Deepwater Horizon.

The BBC reported on April 27th that BP’s first-quarter profits for 2010 were double last year’s.

In 2000, as a result of a close call on a Gulf oil rig, Clinton administration regulators in the MMS notified offshore drilling rig operators that they would henceforth be “expected” to have “reliable back-up systems for actuating the BOP [Blowout Preventer].”

BP uses acoustic BOPs, capable of being operated remotely from auxiliary vessels should an oil platform become disabled, on its rigs off Norway and Brazil, such devices are required by law.

Back in the U.S., though, the industry immediately began fighting the new requirement, complaining that it was costing them too much money. Acoustic BOPs cost about $500,000, or about one-tenth of one percent of the total cost of an offshore oil drilling rig.

On March 18th, 2003, under George W. Bush’s Secretary of the Interior Gale Ann Norton, the MMS reversed itself and said, “acoustic systems are not recommended because they tend to be very costly, and there is insufficient data available on system reliability in the presence of a mud or gas plume.” [Emphasis added.]

Environmental attorney Mike Papantonio told Ed Schultz on MSNBC that the change in policy was “one of the deregulations of the energy industry that was negotiated during Dick Cheney’s secret meetings with oil industry and other energy executives during George Bush’s first term in office.”

The Wall Street Journal has reported that a 2007 study by MMS found that “cementing” — filling the space between a well’s casing and the surrounding rock — was the single most common cause of oil rig blowouts — 18 out of 39 in a 14-year period.

It also reported that Halliburton, the oil services company formerly led by Cheney, had cemented a rig that blew out last August in the Timor Sea north of Australia. It went on spewing oil for more than 70 days before being capped.

On April 30th, Halliburton issued a press release admitting it had cemented the Deepwater Horizon, finishing the job just 20 hours before the blowout. It asserted, though, that it would be “premature and irresponsible to speculate on any specific causal issues.” [Again, emphasis added.]

After Hurricane Katrina it was not uncommon to hear, at least on Fox News, from lobbyists, Republican politicians, and conservative talking heads with no visible means of support, that Katrina had caused no oil spills. This was taken as proof that oil drilling in the Gulf fell somewhere between an irresistible business opportunity and a sacred duty.

Like that report, the ongoing catastrophe in the Gulf has done nothing to break the thread of magical realism that runs through the fabric of Republican discourse. Rush Limbaugh has tacitly exonerated Dick Cheney and blamed the spill on “hard core environmental wackos.”

On Monday, Michael Brown, head of the Federal Emergency Management Agency under George W. Bush during Katrina, told Fox News’s Neal Caputo that the Obama Administration had delayed its response to the Deepwater Horizon disaster so that Obama could “pander to the environmentalists and say, ‘I’m gonna shut it down because it’s too dangerous.'”

The same day, House Minority Leader John Boehner (R-OH) touted the Republicans’ American Energy Act expanding offshore drilling. If Rep. Boehner would return our call, we’d ask him, since oil is a fungible commodity, and therefore any locally-drilled oil is just as likely to end up being burned in some Frenchman’s Peugot as it is in an Ohioan’s Chevy pickup, aren’t we better off barring drilling near our coasts?

On Sunday, May 2nd, on Fox News (of course), Bill Kristol offered his recommendation for improving safety: drilling should be conducted closer to shore.