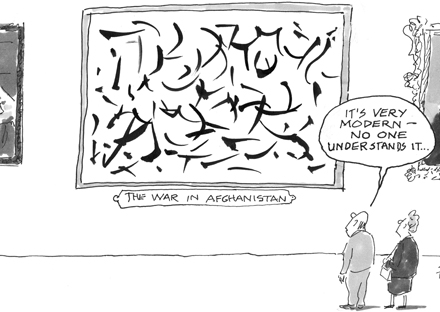 Installing and removing generals from top U.S. commands is usually a process as formal and scripted as Kabuki theatre. Even when generals are being removed for poor performance, a dignified gloss is often applied.

Last week’s replacement of General Stanley A. McChrystal seemed less like a piece of classical Japanese drama than an episode of “Jersey Shore.” The country hasn’t seen anything like it since 1951, when Harry fired Doug.

America’s news media used to think of themselves as the watchdogs of the Republic. There is some truth to that — they can still be drawn off the scent with a nice juicy steak. In some cases, an old McDonald’s wrapper may be all that is required.

Speaking of Fox News, the McChrystal incident must have given them exquisite pleasure. They got to report a lot of scurrilous things being said about a Democratic administration, without fear of reproach: the remarks came originally from the mouths of military men, who, by definition, are beyond reproach.

Fox News analyst James Pinkerton predicted that McChrystal would survive the incident because the General’s “apology was pretty abject.” Fox reporter Major Garrett told Don Imus the same thing, since there was “not another general waiting in the wings” to take over for McChrystal.

Despite stiff competition, Fox’s Gretchen Carlson snatched this year’s Emmy for “Dumbest On-Air Remark” on June 23rd, when she said to her co-hosts Brian Kilmeade and Steve Doocy, “This is what being president of the United States is all about. It’s these tough, huge monumental decisions … It’s just like our job.”

Fox News was far from alone in providing comic relief from the monotonous agony of a war without end. Real journalists did their part, too. Sadly they seem incapable of grasping that fact.

For nine years, major news outlets reporting on Afghanistan have been obsequiously coloring within the lines drawn for them by the military. Now they’re apoplectic because a) a bigshot general gave lowly Rolling Stone a month of unfettered access to the high command and b) its correspondent, Michael Hastings, had the gall to report it in a way that mattered. Have none of these people — McChrystal included — heard of Hunter S. Thompson?

While the bigger-named journalists were whining about Hastings’ disregard for their way of doing things, none of them seemed to notice how much of the mess was their fault. Their deferential approach to power enabled the Bush administration to ignore Afghanistan in favor of attacking Iraq. And then there’s Judith Miller, the New York Times reporter so adept at abiding by the rules that Dick “Perpetually Dick” Cheney could hardly have started the Iraq War without her.

We have had American troops fighting in Afghanistan for nine years — almost long enough to say that the reason they’re there is because they have always been there.

We originally invaded Afghanistan to drive out al-Qaeda, which carried out the September 11th attack on the World Trade Center. Earlier this month General David Petraeus, in testimony before the Senate Armed Services Committee, told Sen. Lindsay Graham (R-SC) that his best estimate of the number of al-Qaeda members remaining in the country is now in “double digits.” On Sunday CIA Director Leon Panetta pegged the number at “50 to 100, maybe less.”

As Think Progress’s Marcy Wheeler has noted, each of those al-Qaeda members is costing us $1 billion a year.

While it’s extraordinarily expensive to kill our enemies in Afghanistan, keeping our friends isn’t cheap, either. The Wall Street Journal reported Wednesday that “in recent years,” more than $3 billion in cash, “packed into suitcases, piled onto pallets and loaded into airplanes,” has been flown out of Kabul International Airport, all of it “declared and legal to move.”

Whatever the financial burdens of war, nothing on earth costs more than giving up one’s life. Some of the resentment members of the military feel towards civilian leaders comes, understandably enough, from strict rules of engagement: in volatile situations our soldiers must sometimes hold their fire, putting their own lives at greater risk, because every dead civilian is a blow to the mission. But Afghan civilian casualties were up by 76 percent in the first quarter of 2010 compared to last year.

As for our own casualties, that trend is worse: our casualties in June were up 262 percent over last year, with three days left to go in the month.

Perhaps, in the fog of war, it needs to be said: if we were not in Afghanistan, the lives of Afghan civilians would not be at risk, and neither would the lives of our own soldiers.

Encoded in the DNA of every professional soldier is a “can-do attitude,” and General David Petraeus, McChrystal’s replacement, is surely no exception. As long as he sees any hope of success, he’ll recommend to his civilian leadership that we “stay the course.”

Forty-two years ago last week, on June 24, 1968, the Chairman of the Joint Chiefs of Staff, General Earle G. “Bus” Wheeler, told an audience in Long Island that “the enemy has lost whatever chance he had of taking South Vietnam by military force.”

Seven years later North Vietnamese tanks broke through the gates of the Presidential Palace in Saigon.

On the day that Wheeler spoke, roughly two-thirds of the Americans who would eventually be killed in Vietnam were still alive.