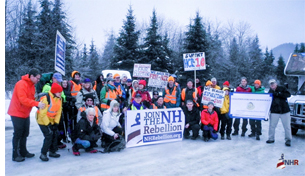 Dern right, Pilgrim. The New Hampshire Rebellion is underway. And it’s about time.

The NHRebellion is a group of people walking the length of the State of New Hampshire — right now, in January.

Their purpose is to make sure every candidate in the 2016 presidential primary answers clearly and specifically this one question: How are you going to end the system of corruption in Washington?

Their effort has stimulated us to use this site as something more than a delivery device for our Digital Subscribers.

These are the best resources we have right now for news about the Rebellion’s progress: Lawrence Lessig’s blog, Twitter, and BlueHampshire. And there’s a Flickr page, too.

We had an item on the NHRebellion in the Alleged News section of the December 27, 2013 issue of our paper [warning: 4.6 MB .pdf file].

Meanwhile, Hedrick Smith is roaming the country, and this state, speaking about his latest book, whose title, Who Stole the American Dream?, asks the central question of our time. You don’t often see journalists at the top of the media food chain doing that. From what we hear, audiences are responding with great enthusiasm.

Giving credit where it’s due, Howard Altshiller had a very good piece in the Portsmouth Herald about Smith and the enthusiastic reception his book is getting. To our chagrin, it’s better that what we had in our January 10th issue [warning: 4.7 MB .pdf file].

So, since relevant things are actually happening, we’re going to try to use this medium, to the extent we can, to follow some of them. Don’t expect too much. We’ve got a newspaper to put out.