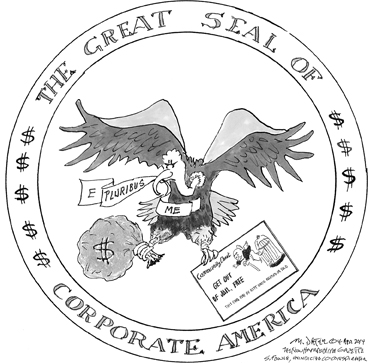 Friday, April 4, 2014 — Normally we give our paid Digital Subscribers first dibs. Today we’re posting the Rant the same day it hits the streets. Enjoy. — The E.]

There are some things that nobody expects, the Spanish Inquisition being only the most obvious example. Another might be a fire extinguisher filled with gasoline. When you buy a product, you expect it to solve a problem, not make it worse.

So Gregory M. Jordan was not unreasonable, after re-financing his California home in 2005, to expect that each mortgage payment he made thereafter would reduce the principal that he owed to his lender.

Despite the evanescent nature of that teaser rate, it was used to calculate the amount of the monthly mortgage payment shown to Jordan on the TILDS. Like a Tyrannosaurus rex in his side view mirror, Jordan’s monthly payments turned out to be significantly larger than they had first appeared.

Due to that higher-but-undisclosed interest rate, Jordan’s monthly payments — though larger than he had anticipated — were insufficient to cover even the monthly interest that he owed.

As a consequence of this series of unfortunate events, even after making his payments on schedule, every month Jordan found himself owing the lender more money, not less — a condition called “negative amortization.”

That was a problem for Jordan, but not for the mortgage originator, Paul Financial LLC. In those heady days, it was easy for mortgage originators to sell wholesale lots of mortgages to the wizards of Wall Street for conversion into arcane “financial instruments.”

Mara Der Hovanesian gives a vivid description of those times in her articled titled, “Sex, Lies, and Subprime Mortgages,” published in Bloomberg BusinessWeek Magazine on November 12, 2008.

“By 2004, she says, she was pulling in several hundred thousand dollars a year. She kept a chauffeur on call to shuttle her and her friends to ‘exclusive clubs, restaurants, and parties,’ and treated friends to shopping sprees at Neiman Marcus, Gucci, and Louis Vuitton. ‘It was the time of our lives,’ says the woman, who now works as an account executive for another lender in the area.”

Gregory Jordan’s incredible exploding mortgage was just one of many thousands that were sold during the short life of Paul Financial LLC. Between its founding in mid-2003 and its foundering in late 2007, it peddled mortgages worth — on paper, anyway — $7.6 billion. Throughout that period the company was owned and operated by Peter T. Paul.

Before setting up his eponymous LLC, Paul had been a Vice Chairman and member of the Board of Directors of Greenpoint Mortgage — during the period it was paying its mortgage wholesalers so lavishly they could afford to keep chauffeurs on call.

Paul had come to Greenpoint during a 1999 merger in which Greenpoint paid $475 million to buy Headlands Mortgage Company, a company he had founded in 1986. According to a 1998 article in American Banker, Headlands specifically targeted “Alt-A” borrowers — those who lacked documentation showing they could make their mortgage payments. The same article noted that “[b]oth Fannie [Mae] and Freddie [Mac] have pledged to expand underwriting guidelines to catch the same ‘alternative A’ quality borrowers that Mr. Paul targets.”

Between 1997 and 2002, Headlands was the nation’s 25th largest originator of subprime mortgages and Greenpoint was the largest,* but as time went on they gained many imitators.

Some of this has been covered here before. We risk redundancy to add a final detail, brought to our attention by a reader.

In October, 2009, in an article headlined “New investors swoop on battered U.S. housing market,” Reuters reported that “Peter Paul … has transformed his business from a loan originator to a buyer of distressed loans. … By buying up distressed loans and getting homeowners … refinancing or payment plans … Paul said his Headlands Asset Management … is set to make profits of 30 percent.”

Lest anyone forget, Peter T. Paul, whose name now graces what used to be called the Whittemore School of Business at UNH, is using some fraction of his wealth to sponsor Dan Innis, the former Dean of the Whittemore School, as a Republican candidate for the First Congressional District.