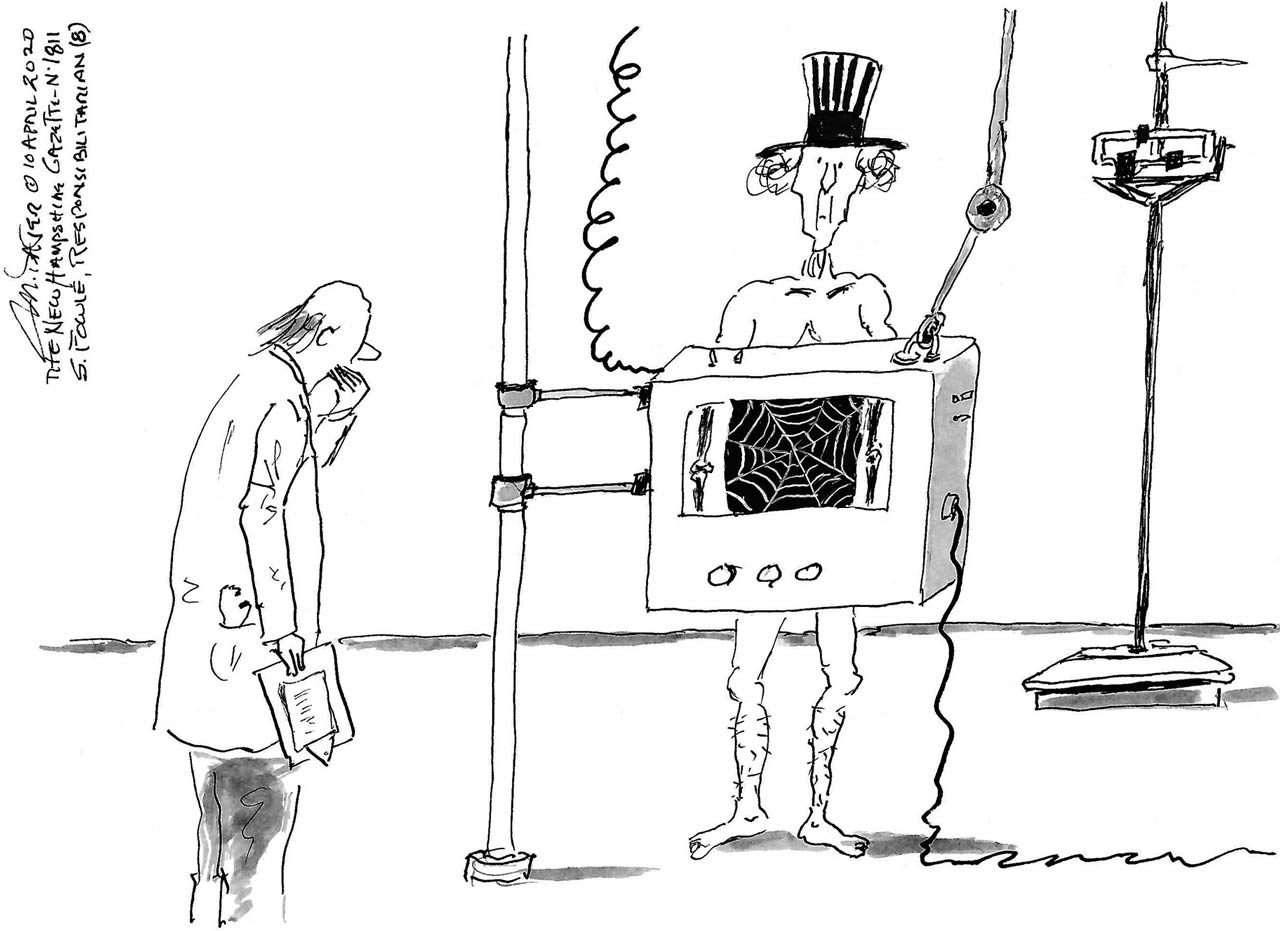 Last weekend Covid-19 was killing a thousand Americans a day. If the death rate doubles every six days or so, this weekend we’ll say goodbye to 4,000 more.

This is, of course, quite terrible. It certainly seems so right now. All things being relative, though, and the laws of mathematics being as they are [the exponential function has a power that Bill Barr can only envy] a month or two from now we may look back and see these as the good old days.

Remember the bumper sticker, “Giant Meteor 2016—Just End It Already”? The comet never came, but we got the next-worst thing: umpteen trillion itsy-bitsy blobs of ribonucleic acid are giving this country its biggest X-Ray ever.

“How can this be happening?” some might ask. So might an English peasant have cried in 1348, as he discarded a chicken bone next to his hovel, where it was seized by a flea-infested Norway rat. We’ve been walking into this fateful ambush for more than a century.

Our non-paper* of March 27th carried the following item for April 8th:

“1917—At the U.S. Embassy in Bern, future CIA head Allen Dulles gets a call from I.V. Lenin, begging for an immediate meeting. Dulles, who has a date with buxom Swedish twins, puts him off. Lenin boards a train to Petrograd and starts a Revolution.”

“1917—Prescient President W. Wilson establishes the Committee on Public Information, 67 years prior to 1984.”

As the sordid life of Allen Dulles† demonstrates, the Prime Directive of the U.S. Government has been to defend capitalism against all enemies, foreign and domestic.

Even after purportedly leaving corporate law—Allen becoming Eisenhower’s CIA Director, John Foster his Secretary of State—they continued serving the same clients. This diabolical duo overthrew insufficiently-capitalist governments from Guatemala City to Kinshasa, and from Saigon to, most likely, Washington, D.C.

The Dulles brothers were unique, of course, only in their fraternal partnership. The vast majority of American politicians have been enthusiastic capitalists, particularly since the rapid proliferation of railroads in the period following the Civil War. It’s difficult to resist so remunerative an ideology on a mere Congressman’s pay.

Having learned our history from Hollywood, we tend to see the time between the Civil War and World War I as one long western movie. In fact it was fifty years of Congressional corruption, urbanization, widespread factory-based wage slavery, and Jim Crow laws, all within an economy wracked by cycles of boom and bust. In the absence of foreign adventures, our military establishment, amounting mostly to state militias, kept in shape by using rifle butts to beat striking workers into submission.‡

President Woodrow Wilson barely won re-election in November, 1916. The slogan, “He kept us out of war” may have given him the edge. “Yet within a very short period after America had joined the belligerents,” said a 1940 report by the Council on Foreign Relations [CFR], “the nation appeared to be enthusiastically and overwhelmingly convinced of the justice of the cause of the Allies, and unanimously determined to help them win.”

The CFR report attributed the change in attitude to “the work of the group of zealous amateur propagandists, organized under Mr. George Creel in the Committee on Public Information [CPI]. With his associates he planned and carried out what was perhaps the most effective job of large-scale war propaganda which the world had ever witnessed.” Our titans of industry, noticing this stunning achievement, began investing millions in the public relations racket—at the pinnacle of which stood Sigmund Freud’s nephew, CPI alumnus Edward Bernays.

America’s anti-Communist crusade was briefly suspended as the Soviet Union lost 13 percent of its population fighting Nazis on the Eastern Front. Approximately one day after victory in Europe, the U.S.—on its way to losing 0.32 percent of its population—rounded on its former ally and resumed hostilities. Preventing foreign countries from succeeding under anti-capitalist systems is quite expensive—but it’s cheaper than letting Americans start getting strange ideas.

Working stiffs who survived the war were like peasants who made it through the Black Plague: for once they were in a slightly better bargaining position. Many men with high school educations could work a factory job, buy a house, and support a family—largely because they could join unions. Even some Black men got in on the action. Obviously, this all had to stop. Neoliberal policies made sure it did.､

With collaboration from feckless Third Way Democrats, Republicans led the way, crushing unions and gutting the Government. Arthur “The Curve” Laffer ludicrously claimed that lowering tax rates would increase tax revenue. It did not. Grover “Drown The Government In The Bathtub” Norquist was honest about his intentions, at least.

Yesterday, Reuters’ Heather Timmons tweeted, “Art Laffer is being floated as head of a new task force to ‘reopen’ the U.S. economy.”

* For the record, it is our intention to survive this mess and resume our longstanding love affair with newsprint just as soon as we possibly can. — The Ed.