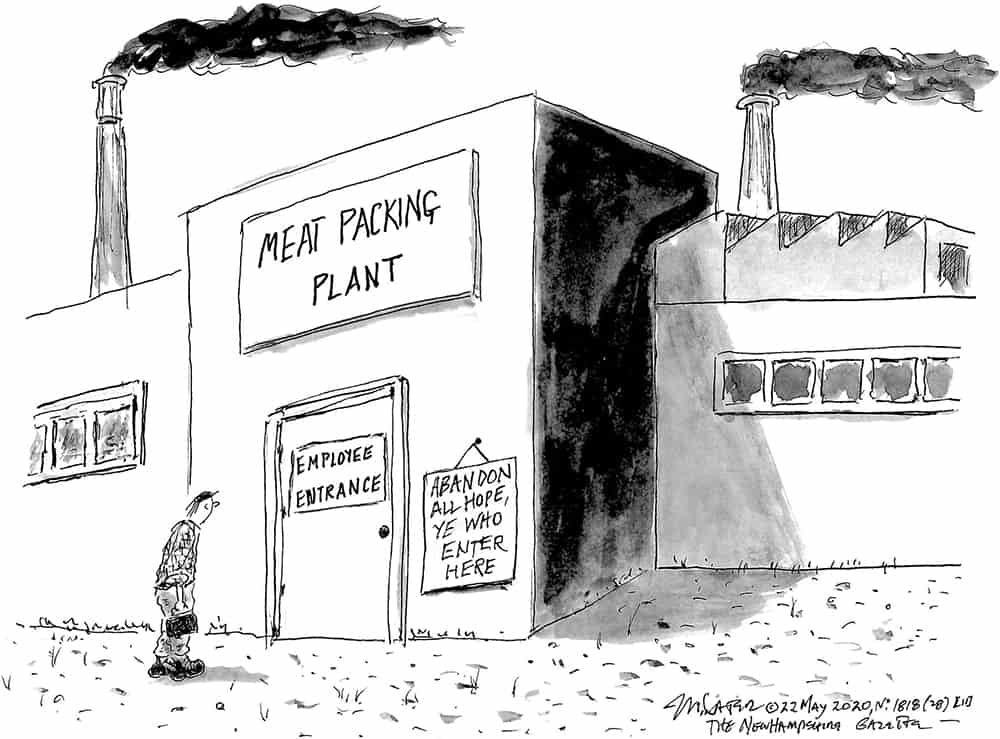 Officially, as of Tuesday afternoon, more than 1.5 million Americans were confirmed to have been infected by the coronavirus. More than 90,000 have died. Those are the figures we have to work with, anyway. We know that both numbers will only rise.

That goes without saying for the death toll, of course, because life is a one-way street. These days, though, with more than 1,200 people dying every day from the virus, the mortality department’s accountants can no more keep up than Lucy and Ethel in the candy factory.

The number of total cases is also a moving target; with new people getting infected every day, naturally there’s a time lag in the reporting.

Though these numbers are unreliable, because we know the direction in which they err we can still use them to perform one important calculation. We just have to remember that no matter how bad the results may look superficially, the true story is even worse. That’s saying a lot, because even the lowball number is terrible.

Hard though it may be for a Trump voter to believe, Americans make up just 4.2 percent of the world’s population. If everything else were equal, we could expect to have 4.2 percent of all cases of Covid-19. Instead, though, we have suffered about 30 percent of all known cases. In cold, mathematical terms that’s a ratio of 7.2.

Amidst all the endless coverage of this modern-day plague, this striking deviation from the statistical mean doesn’t seem to get much notice. As of Wednesday we had heard it mentioned once, in passing, on NPR.

That seems strange, considering what it means: this Great America of ours is suffering at a level that is 7.2 times higher than it would be if this country were being run by an Administration of middling competence.

Now let’s take another look at the total number of cases of Covid-19 in the U.S. In addition to the previously-mentioned reporting lag, there’s a second factor that’s been keeping that number artificially low.

Since the virus began to spread, this Administration has done about as well at bringing Federal resources to bear against it—particularly in the matter of testing—as…well, words fail us. Brownie’s “Heck of a job?” The Vatican’s policing of pederast priests? Neither of those abysmal failures comes close to matching the magnitude of this one.

Was this really just another example of the standard-issue Trumpian incompetence to which we have become depressingly accustomed? Or did this Administration intentionally suppress testing, in order to make the total number of cases appear to be lower?

We are not accusing anyone, of course, of having done this. Heaven forfend—none but a child would conceive of such a dim-witted scheme, and only a monster would carry it out.

That’s what Politico health reporter Dan Diamond told NPR’s Terry Gross back in March, though. The first batch of tests sent out by the CDC “simply did not work,” he said.

“They were coming back with errors. The CDC, the Centers for Disease Control, recognized that and promised that new tests would be distributed soon. But one day turned into two days turned into three days turned into several weeks, and in the meantime, we know now coronavirus was silently spreading in different communities, like Seattle. By the time that the Trump administration made a decision to allow new tests to be developed by hospitals by clinical laboratories, it was a step that was seen as multiple weeks late.”

Why was there no White House pressure to get that vital job done?

The deadly consequences of delay were quantified in a New York Times story on Thursday morning.

“If the United States had begun imposing social distancing measures one week earlier than it did in March, about 36,000 fewer people would have died in the coronavirus outbreak, according to new estimates from Columbia University disease modelers.

“And if the country had begun locking down cities and limiting social contact on March 1, two weeks earlier than most people started staying home, the vast majority of the nation’s deaths—about 83 percent—would have been avoided, the researchers estimated.

“Under that scenario, about 54,000 fewer people would have died by early May.”

Trump and his cult want us to believe none of this is his fault because “no once could have seen this coming.” Considering the source, of course, we know that’s a lie.

NPR proved that Tuesday morning, with a report about a two-year effort by the Pentagon’s National Defense University to prepare for a pandemic by running simulations—war games. “The scenario: A novel flu strain is racing across the planet. The virus is deadly and highly contagious; U.S. officials are trying to contain the outbreak before it hits the United States. (Spoiler: They don’t succeed.)”

Ironically enough, this forward-thinking but wasted effort was made during the administration of the previous holder of the title Worst President Yet: George W.[MD] Bush.

Just three and a half years ago, at his inauguration, Donald Trump described this nation—which had, at that point, more or less recovered from a years-long, Wall Street-engineered financial disaster—as a scene of American Carnage.

On Tuesday he bragged about the number of Americans who have died in the pandemic—a number that would be equal to the passenger lists of 256 chock-full Boeing 747s, one crashing every ten hours, around the clock, with no survivors, all since approximately Valentine’s Day:

“Actually the number of cases, and we’re also a much bigger country than most, so when we have a lot of cases, I don’t look at that as a bad thing, I look at that as, in a certain respect, as a good thing, because it means our testing is better.”