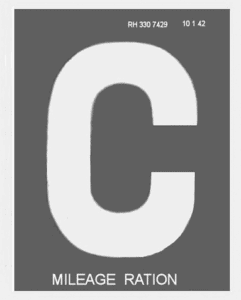 Somewhere in my house is an envelope containing my grandfather’s World War II certificate for a Class C gas-rationing sticker. I last saw it a quarter of a century ago, before my father tucked it away again, probably in one of the trunks in the upstairs closets.

Gasoline was one of the first commodities rationed by the Office of Price Administration after the attack on Pearl Harbor. They called it “mileage” rationing, and gasoline was not the item they were saving. What we were lacking was rubber, since the Japanese had taken early control of the rubber plantations of Southeast Asia. Metal soon became scarce, too. Restricting the use of gasoline indirectly kept drivers from wearing out their tires, and their cars.

The rationing was calculated on an average fuel consumption of 15 miles per gallon. Average working slugs were issued Class A stickers for their windshields, and could only buy three gallons a week. Employees in certain industries and those whose jobs required regular travel were allowed eight gallons a week on a Class B sticker. Commuter life was a postwar phenomenon, and short hops to work were the rule, but rationing still motivated the first widespread carpooling.

My grandfather came out of retirement during the war and went down to Wellfleet, Mass., to replace the town doctor for the duration. That entitled him to a coveted Class C sticker, with no limit.

The next rationed commodity was sugar, which was still a luxury in 1942. Eventually, ration stickers were needed to buy most processed foods, so packaging plants could make enough C-rations for the servicemen of that war and the next two (and the boned chicken stamped 1944 was still tasty in 1969). Fresh fruits and vegetables were never rationed, and wartime posters lauded the patriotism of women who did their own canning in jars.

All this came to mind repeatedly over the past two months, especially after local stores started taping “one-per-customer” signs on the empty shelves where toilet paper and hand sanitizer used to be. It’s hard to predict what people will choose to hoard in a crisis, even for an old prepper like me. I was way ahead of the toilet-paper rush, but I never thought of hand sanitizer—and why would I, with a few dozen bars of soap stashed away?

The hysteria over the latest mutation of coronavirus may also have resurrected another unpleasant reminder of World War II. The Chinese origin of the virus has apparently led some people to confuse ethnology and epidemiology sufficiently to prejudice them against anyone who looks remotely Chinese. Let’s hope this is more reflective of news outlets exercising their habit of disproportionately emphasizing isolated incidents, but at least a few people have been insulted or even assaulted for “coughing while Asian,” as one of them put it.

It’s preposterous to find something malicious in naming a virus for the place where it was first identified: German measles never inspired that complaint. Blaming people for it because of presumed Far Eastern ancestry, however, is equally absurd. The obvious analogy between that and World War II would be the fear that drove Nisei internments, but advocates of internment could at least make a tenuous argument for cultural sympathy with the enemy. And before condemning such paranoia in paroxysms of progressive outrage, remember Andrew Cuomo’s assertion that it’s better to be safe than sorry, despite terrible consequences. Anyone frightened enough to agree in 2020 might have concurred in 1942.

A third echo of the past is the effervescing self-righteousness of those who endorse the precautionary guidelines du jour. In the late 1950s, war-era jokes still appeared in cartoons, and a scowling bureaucrat might interrupt a chase scene to ask “Is this trip really necessary?” Others depicted air-raid drills, with self-appointed compliance constables screaming “Turn out that light!” when they spotted houses without blackout curtains. Equivalent pretentions to superior virtue emanate today from mask scolds, and from the independently wealthy or comfortably retired proponents of interminable lockdowns, who condescendingly lecture a strapped working class to “get a clue.”

The main difference between World War II and now is the lack of unity. In 1942, a common threat of existential proportions persuaded Americans to set aside their differences to a greater degree than they had during any previous crisis—or any future one. Today, a somewhat less apocalyptic threat seems only to pose an opportunity to attack each other with more ferocity than ever before.