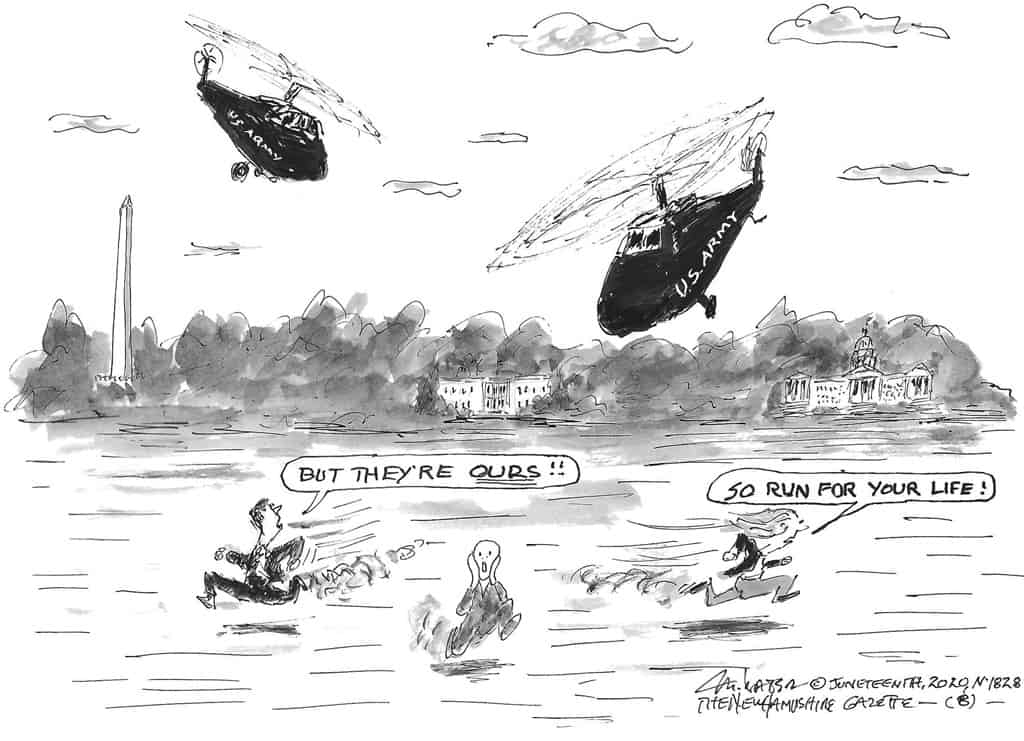 Twelve score and four years ago, smugglers, land grabbers, farmers, and shoe makers brought forth on this continent a new nation, conceived in a curiously narrow vision of Liberty, and dedicated—nominally—to the proposition that all men are created equal.

Now we are engaged in a great difference of opinion, testing whether that nation can endure much longer while ten Army posts continue to honor the names of men who fought against it in a great Civil War.

It would be altogether fitting and proper for us the living to re-dedicate those places. We could give them new names, in honor of others—men, or women, who struggled to complete, rather than halt, the as-yet unfinished work of creating a government of the people, by the people, and for the people.

The question is whether such changes can be made without that difference of opinion boiling over into a Civil War re-enactment with life ammunition—an outcome certainly better avoided. One American in forty ended up dead during the first go-round. If a remake produced a similar result, the loss would be equivalent to the combined populations of New Hampshire, Maine, Montana, Rhode Island, Delaware, South Dakota, and Guam.

When we first wrote about this issue, on August 2nd, it seemed inconceivable that the Pentagon would ever rename even a relatively minor post such as Fort A.P. Hill—though there were plenty of reasons why it should.

It goes without saying that Hill was both a traitor and a loser; that’s true of the whole lot now under discussion. Certain additional factors make Hill a poor role model. One of the most notorious carousers in his West Point class, he had to repeat a year to make up for the time it took him to recover from an epic case of gonorrhea. Though he was effective early on in his Confederate career, he was frequently placed under arrest by his superiors. At several crucial times, however, he was unable to perform his duties due to the lingering effects of his youthful indiscretion.

As things now stand, though, the nation is in the uncomfortable—one might say, untenable—position of honoring the man who justified Georgia’s secession thusly:

“What was the reason that induced Georgia to take the step of secession? This reason may be summed up in one single proposition. It was a conviction, a deep conviction on the part of Georgia, that a separation from the North was the only thing that could prevent the abolition of her slavery. …[If abolition comes] we will have black governors, black legislatures, black juries, black everything. Is it to be supposed that the white race will stand for that?…our men will be compelled to wander like vagabonds all over the earth; and as for our women, the horrors of their state we cannot contemplate in imagination. …Suppose they elevated Fred Douglass, your escaped slave, to the presidency? What would be your position in such an event? I say give me pestilence and famine sooner than that.”

As recently as February, an Army spokesperson had told the website Task & Purpose that it had “no plans to rename any street or installation, including those named for Confederate generals.”

On June 8th, though, Politico reported that the Secretary of Defense and Secretary of the Army were now “open to a bi-partisan discussion on the topic.”

This surprising announcement came after a week of stories about U.S. military forces taking controversial actions in the nation’s Capitol.

Perhaps most jarring was a pair of District of Columbia National Guard helicopters hovering over protestors at an extremely low altitude, battering them with rotor wash, tree limbs, and loose street debris. One was a Lakota medevac chopper, marked with large red crosses.

“Misuse of the red cross symbol is prohibited even during peacetime by the First Geneva Convention, to which the U.S. is a party,” Rachel E. VanLandingham, a former Air Force attorney and professor at the Southwestern Law School in Los Angeles, told the Washington Post.

National Guard units are typically under the control of state governors. Since the District of Columbia has no governor, its Guard reports directly to the President. We have not seen any reporting to indicate that the orders for this violation of came directly from the Oval Office—yet.

Members of Congress and retired officers expressed alarm at the scene. Trump, safe within a newly-erected Green Zone around the White House, tweeted praise for the pilots.

Trump had thoughts about renaming Army posts, too. The very idea of renaming “These Monumental and very Powerful Bases,” he tweeted in his inimitable style, which “have become part of a Great American Heritage, and a history of Winning, Victory, and Freedom” was out of the question. His administration would “not even consider the renaming of these Magnificent and Fabled Military Installations. Our history as the Greatest Nation in the World will not be tampered with. Respect our Military!”

On the same day Trump tweeted a demand for respect for “his” military, Republicans on the Senate Armed Services Committee were dissing him. They allowed to pass by a voice vote an amendment to the Defense Authorization Act—put forward by Sen. Elizabeth “Pocahontas” Warren, no less—that would strip Confederate names from military bases within the next three years.

Tomorrow, President Cartman will visit Tulsa, which is currently experiencing a spike in coronavirus infections. There he will try to assuage the emptiness within by basking in the admiration—and exhalations—of thousands of supporters.