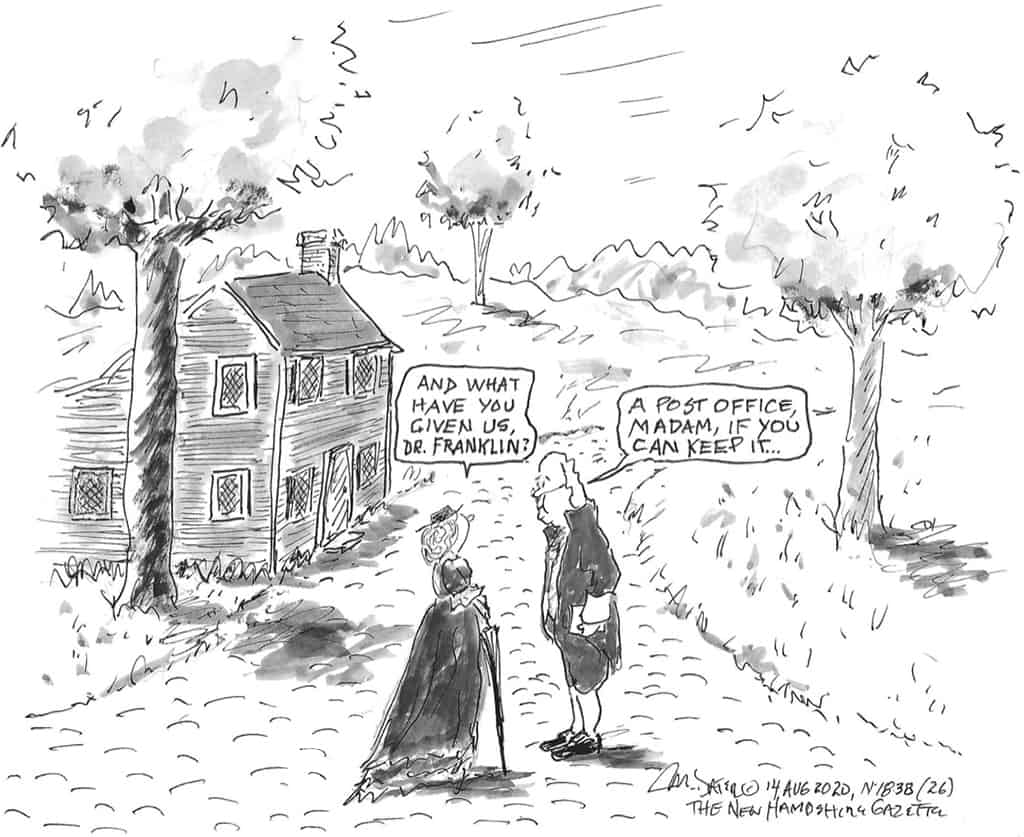 If a kid takes a swing at your mailbox with his Louisville Slugger, 18 U.S. Code § 1705 says he could get three years in the hoosegow and a quarter-million dollar fine.

Louis DeJoy, on the other hand—our new Postmaster General—is sabotaging the whole dang U.S. Postal Service. If he succeeds he’ll get a lifetime pass at a string of tacky golf courses, and God only knows what other rewards and emoluments.

DeJoy’s petty grifts are the least of our problems, though. Let him have that solid gold toilet Maurizio Cattelan made for Trump, for all we care. What’s worrying us are the consequences of what the man’s been up to. Let’s begin by considering the larger context.

There can be little doubt that Democratic voters take science more seriously than Republicans. No matter how desperate Democrats are to vote against Trump, every polling place is going to look to them like a petri dish crawling with Covid-19.

Republicans, on the other hand—those who are still alive on November 3rd—are likely to put their faith in the Bible, not Dr. Fauci. They won’t hesitate to swarm the polls, proudly demonstrating their defiance of science, and their fealty to their sleazy new Messiah.

In other words, because their response to the challenge of Covid-19 was so incomprehensibly awful, the incumbent and his cronies were rewarded with a unique and unprecedented opportunity to rat___k* their opponents, simply by destroying the Postal Service.

What’s that you say? Acting on that opportunity would be a scurvy trick which would irreparably damage the only federal agency important enough to be mentioned in the Constitution, and therefore they should forbear?

Please. Failing to exploit this opportunity would be an insult to God, from whom all blessings flow. Just ask Hank Kunneman, senior pastor of Lord of Hosts Church in Omaha, Nebraska and founder of One Voice Ministries: “God is trying to reelect President Trump. … Are you gonna side with God…?”

If you don’t show up and vote for Trump, you’re siding with the Devil. Besides, Armageddon’s coming any day now—just ask the Secretary of State. So why worry about a few Post Offices?

In order to fully appreciate our present nightmare—we’ve bought the ticket, let’s take the ride—we need to remember that this is not merely the confluence of a crucial impending election with a lethal pandemic. When Louis DeJoy was appointed Postmaster General earlier this year, it was merely the culmination of a very long campaign.

And why not? From a right winger’s perspective, what’s not to hate about the Postal Service?

Hundreds of thousands of largely unionized, racially-integrated Americans earning a good living—it sets a bad example. Besides, it represents a huge lost opportunity. Privatize it and you can cut back on services, jack up the prices, slash wages and benefits—just think of the yachts and mansions you could buy with the profits! Its mere existence, in its current configuration, is an insult to the American Dream.™

The foundation of this scheme was laid during the Bush #43 Presiduncy. In its waning days, the lame duck Republican 109th Congress passed an innocuous-sounding bill called the Postal Accountability and Enhancement Act. As is now the fashion, the bill was grotesquely mis-named. Since it committed the U.S.P.S. to paying in advance 50 years worth of pensions and health care benefits, a more apt title would have been the Subprime Junk Mortgage Exploding Post Office Act.

The results were as expected. By needlessly siphoning off $5 billion a year, the U.S.P.S. was made to look as if it its operating costs were out of control. When they weren’t busy yelling “Benghazi,” or “tan suit,” Republican Members of Congress and their right wing media shills could bemoan the U.S.P.S.’s manufactured operating deficit.

The allegedly-objective corporate media and NPR played their part, too. By dutifully sticking to their stenographic roles, they amplified this thoroughly bent narrative. God forbid they should quit playing dumb, stick out their necks, and state the obvious. That’s a good way to lose a well-paid job.

So, for 13 years, now, the U.S.P.S. has been marinating in this fiscal acid bath, and the public has been absorbing lies about the reason why.

Curiously, during Trump’s first three years in office, the Postmaster General was an Obama holdover. Why did he ever put up with that?

The U.S.P.S. isn’t part of the Executive Branch—he can’t hire and fire. It has its own “independent” Postal Board of Governors, whose members—Governors, they’re called—must be approved by the Senate—if the Senate feels like acting.

As their terms expired during the Obama administration, the Board dwindled due to forced attrition. Since 2018, though, Trump has refreshed the Board, appointing six new members. In May, that Board, all Trump appointees, named Louis DeJoy to be the 75th U.S. Postmaster General.

And why not? He deserves something, after all he’s done for his country President. This year alone, DeJoy has donated $360,000 to the Trump re-election campaign and another $70,000 to the RNC. And he knows the business—he’s got $75 million invested in direct competitors of the U.S.P.S.. If you’re going to brazenly steal an election, well—be brazen about it!

Being The Nation’s Oldest Newspaper,™ we’re quite comfortable with taking the long view. Even so, when the Postal Service announced in 2007 that it had begun selling “Forever Stamps,” that struck us as perhaps a little too optimistic.

We also tend to take what could be called a rather dark view of both the past and the future. We never suspected, though, that just 14 years later, the whole enterprise—the Postal Service, and the nation it serves—would be teetering on the brink of destruction.

* We regret the vulgarity, but it’s important to use the proper nomenclature. “Rat___king is an American slang term for political sabotage or dirty tricks, particularly pertaining to elections. It was brought to public attention by Bob Woodward and Carl Bernstein in the book which chronicled their investigative reporting of the Watergate affair, All the President’s Men (1974).” – Wikipedia.