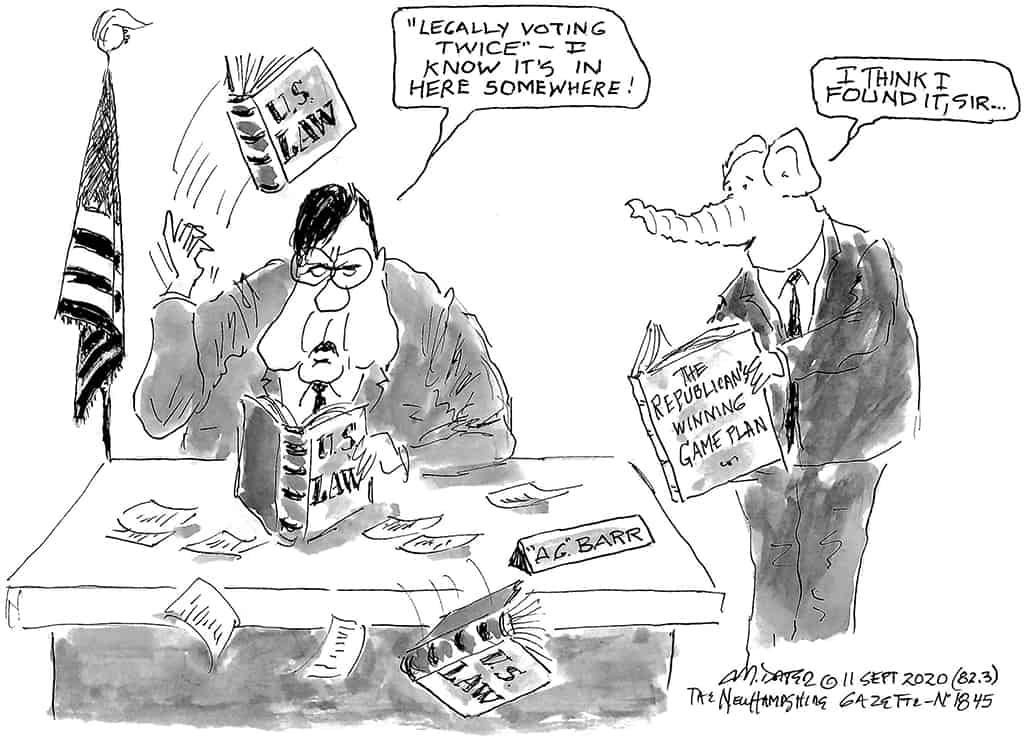 Seven weeks from Tuesday, the 2020 Presidential campaign will end. Polling stations will close, and the real fun will begin.*

We lucky Americans, we happy multitudes, trained for more than half a century by nearly-anonymous benefactors carefully crafting the slime oozin’ out from our TV sets, have come to expect a dramatic election night full of brightly colored maps and lively gesticulations combining to form an arc of rising expectations, leading to a dramatic wee-hour climax.

Let us hope and pray that the current cadre of showrunners—funny how the Framers left them out of the Constitution—are up to the challenge on this occasion. If they deliver us a 20 year-old re-run, the future will make these seem like the good old days.

No contract purporting to renew the unreality-TV show “This American Carnage™” should be considered legally valid. Consider the damage done during the initial run. That was from a standing start. Whatever might survive another four years of this would not be the U.S.A.

For all the uncertainty, though, one thing seems fairly certain: no matter how the votes add up on the night of November 3rd, there’s a better than even chance that the incumbent will declare victory—perhaps the greatest victory in history. There may even be fireworks over the Washington Monument. Perhaps a new statue will be unveiled in the Lincoln Memorial. To quote the would-be tyrant himself, “Who the hell knows?”

As our previous paper went to press [so to speak], Kellyanne Conway, one of the President’s closest advisors, set the tone for the fortnight. “The more chaos and anarchy and vandalism and violence reigns,” she said on Fox & Friends, “the better it is for the very clear choice on who’s best on public safety and law and order.”

The next day, using Air Force One as a backdrop, El Jefe held a corona-fest at the fancifully-named Manchester-Boston Regional Airport. AP’s Zeke Miller and Kevin Freking reported that “a campaign advisory said masks for attendees are ‘required’ in accordance with Republican Gov. Chris Sununu’s executive orders, and would be provided.”

Judging from AP photos accompanying the article, about half of the audience may have complied. “Many in the crowd did not put their masks back on after singing the national anthem,” AP reported. “They later booed when a campaign staffer called on them to do so.” Sununu’s mask orders were mocked by the crowd, but the day’s featured speaker honored a lie the Governor told nearly four years ago.

On October 31, 2016, Sununu said, “The Democrats are very sly. … (in New Hampshire) we have same day voter registration, and to be honest, when Massachusetts elections are not very close, they’re busing them in all over the place.”

Nine months later Sununu lied about the lie. “I’ve always said,” he told NHPR on July 7, 2017, “we have no evidence of voter fraud in this state. We have none. I’ve never seen a bit of actual evidence of it.”

…but we digress. That’s the trouble with trying to hold certain parties accountable when they lie with such abandon. We set out here to provide an overview of the ways in which the guy with the nuclear launch code at his disposal is scheming and plotting to get another four years in which to use it. Transfixed, though, by the sight of this vast and bizarre political structure—the most grandiose thing ever built by using an architectural theory wholly dependent upon lies—we run the risk of losing the plot altogether. Where were we?

Ah, yes: a few days later—after denying last fall’s visit to Walter Reed was prompted by mini-strokes in his “very, very large brain”—President Runamouth suggested that his supporters 1) vote by mail, and, 2) go to the polls. So far, so terrible. But did this administration leave it at that? Don’t be silly.

CNN’s Wolf Blitzer, attempting to perform his assigned, not-yet-outlawed function as a member of the Fourth Estate, did his best to clear up the confusion caused by the President. During a live exchange with the nation’s top law enforcement oficer, he asserted that “if somebody mailed in a ballot, and then actually showed up to vote in person, that would be illegal.”

“I don’t know what the law in a particular state says,” Attorney General William Barr replied.

“Well, I don’t know what the law in a particular state says,” Barr reiterated, “and when that vote becomes final…”

Blitzer: “Is there any state where you can vote twice?”

Barr: “Well, if there’s some…maybe you can change your vote up to a particular time? I don’t know the law…”

The little kerfuffle over the President’s suggestion that his supporters ought to get to vote twice—and Barr’s attempt to reinforce it—were promptly washed from the public’s brain by an article in The Atlantic. The President, it said, called 1,800 Marines buried at the Aisne-Marne American Cemetery “losers” who were “suckers” for getting killed at Belleau Wood. The story was quickly confirmed by other news outlets. Among those corroborating it was Fox News’ own intrepid Jennifer Griffin.

The furor still reverberates—so much so that another outrage involving the A.G. hasn’t gained much traction. If Barr has his way, and Trump loses a court case, the U.S. taxpayer may pay damages to a woman suing the President for rape.

It takes courage these days just to glance at the headlines, now that the sky over Nancy Pelosi’s Congressional district has turned the color of the President’s face.

There is always the option to hide and mope. That only increases the odds of defeat, though, and heaps shame upon the survivors. As for us, we intend to continue scratching out some record of these times, however bizarre they become.

* This being the year of [good Lord] 2020, a disclaimer is required here. If the events of the past fortnight have shown us anything, it’s that 3.7 fortnights hence, nearly anything could happen—or not happen. In order to publish at all, though, we are forced to make some assumptions.