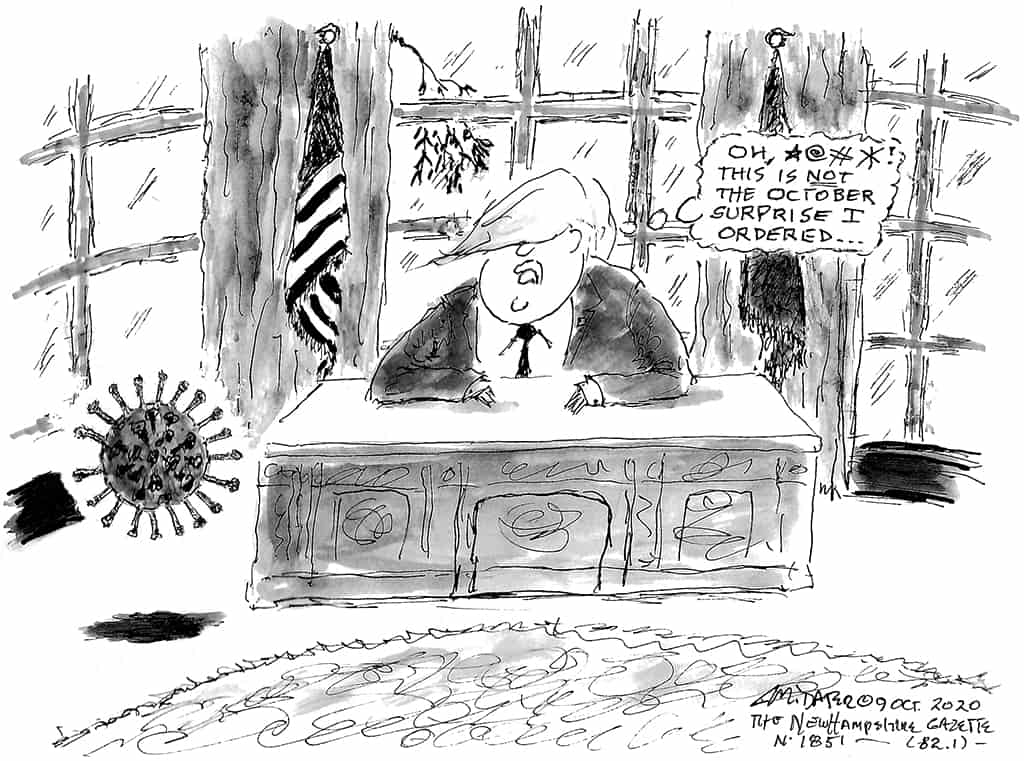 Like many Americans, we have been struggling. Authoritarian gibberish has an anesthetizing effect on some, but we are not among them. The pandemic has forced us to eschew newsprint. That deprivation, we have found, is less like kicking a drug habit than it is like having a limb amputated—or all of them.

We will go on, of course. At our age—having recently begun our 265th year—we can imagine no other course. For the record, though, these conditions are intolerable; reader, forgive us, please, for kicking against our stall.

Perhaps we’re being predictable, but we lay the responsibility for this predicament on someone we’ll call, for variety’s sake, The Usual Suspect. At last count more than 210,000 Americans have been killed by the plague he failed to stop. His own White House has more cases now than the nation of Vietnam. With such a record it seems impossible to imagine that things could get any worse—and therein lies the trap.

Not long ago we published a photo of a banner depicting the Suspect as Captain America—a so-called superhero. So he appears to the gibberish junkies. It pains us to say it, but he does fit the description in one limited way: he has a power we’ve never seen elsewhere.

Every day, he makes things worse—and not just any old worse, but a far worse worse than any worse you could imagine on your own.

It’s a pattern that, once noticed, is impossible not to see: every day…every day, in every way….

Wait—why does that sound so familiar to us…?

Because, Dear Reader, years ago, during our lengthy apprenticeship, we were exposed to the mantra of Dr. Émile Coué.

Coué Tells Boston How
to Get Better and Better

The advice, as a whole, was such as any good physician would give a patient…[Coué] called himself ‘a simple, ordinary man,’ but hundreds in those two big audiences…regarded him—in spite of his protestations—as something very much out of the ordinary….many had traveled far distances to see and hear him—sufferers many of them—and these people rather expected M. Coué to perform miracles.

Coué called Americans ‘very imaginative,’ saying they had ‘a Celtic quality’ in that regard.

If you are suffering from any severe pain, such as a toothache or headache, sit down, close your eyes and assure yourself calmly that you are going to get rid of it. Now gently stroke with your hand the affected part and repeat at the same time as fast as you can, producing a continuous stream of sound, the words, ‘It’s going, going, going…gone!’

– Dr. Émile Coué, quoted in the September 17, 1922 edition of the Boston Sunday Globe, Editorial and News Feature Section, page one.

Little question for today:
Who was Dr. Émile Coué?

Confirming our recollections of Dr. Coué, we learned that the linkage between him and our Usual Suspect transcended a mere shared belief in…let’s be kind and call it “woo-woo.”

According to our old friend Wikipedia, “Although Coué’s teachings were, during his lifetime, more popular in Europe than in the United States, many Americans who adopted his ideas and methods, such as Maxwell Maltz, Napoleon Hill, Norman Vincent Peale, Robert H. Schuller, and W. Clement Stone, became famous in their own right by spreading his words.”

Individual 1—let’s call him what Mueller did, for the nonce—has often cited Peale as his “family pastor”—as if that were something of which to be proud. To the best of our knowledge, though, he has never admitted that Peale learned his grift from Coué, the O.G., the Master. That’s not surprising, though; neither has he acknowledged that the family fortune was founded by a draft-dodging whoremonger, his grandfather Frederick.

Gwenda Blair was on to this connection in October of 2015. A teacher of journalism at Columbia, and the author of The Trumps: Three Generations of Builders and a Presidential Candidate, got definitive for an article in Politico: “When Coue’s follower Dr. Norman Vincent Peale published The Power Of Positive Thinking in October 1952, Trump’s parents, Fred and Mary, felt an immediate affinity for Peale’s teachings. On Sundays, they drove into Manhattan to worship at Marble Collegiate Church where Peale was the head pastor. Donald and both his sisters were married there, and funeral services for both Fred and Mary took place in the main sanctuary.

“‘I still remember [Peale’s] sermons,’ Trump told the Iowa Family Leadership Summit in July. ‘You could listen to him all day long. And when you left the church, you were disappointed it was over. He was the greatest guy.’”

BLOTUS—we trust you know to whom we refer—has now, finally, come down with a case of the disease which he has bestowed upon millions of others. Unlike them, he has access to what may be the best socialized medicine on Earth.

Or might be, if he didn’t meddle. Patient Zero of the White House Cluster[cough] has apparently been channeling a certain stout, dapper, bowlered and moustachioed gent who was not, for the record, a real doctor after all.

Full of steroids and a miracle cure from a company in which he holds stock, the Man With His Finger On the World’s Largest Nuclear Arsenal returned to the World’s Most Expensive Public Housing Unit a couple of days ago. That event was filmed for campaign purposes. The result appears to be an homage to Leni Reifenshtahl’s Triumph of the Will. He just made an hour-long call to CNN. We’re afraid to listen. Election day is three and a half weeks away. Let’s hope we make it.