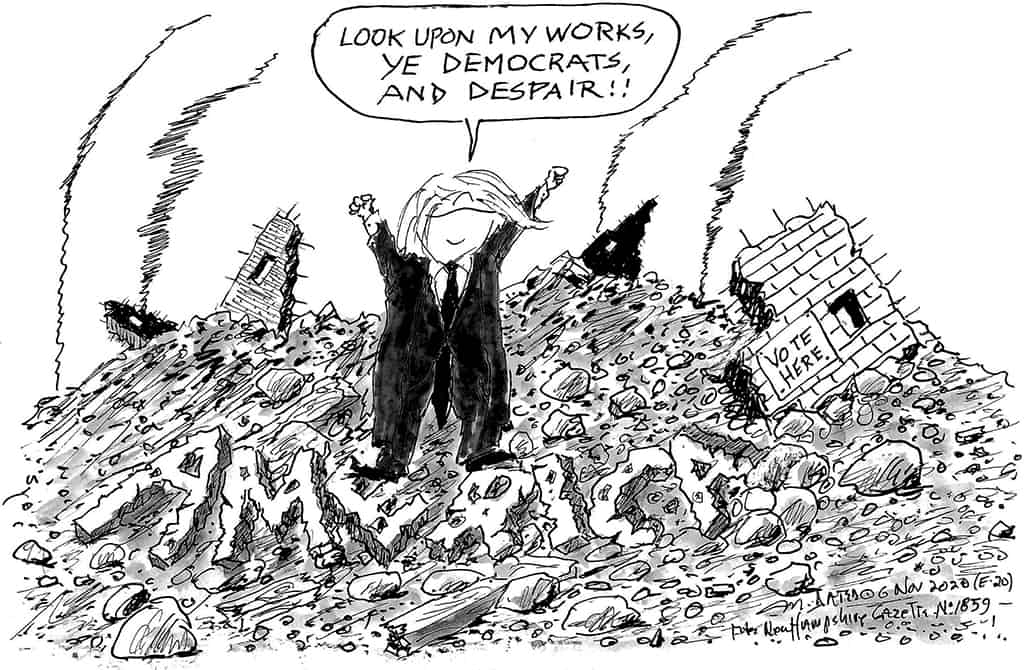 “I want to thank the American people for their tremendous support,” said a grim-faced President Donald J. Trump to a group of maskless sycophants packed into the East Room of the White House early on Wednesday morning for another in an extended series of illegal campaign events on government property.

“Millions and millions of people voted for us tonight…,” Trump observed, conveniently ignoring the fact that several million more had voted against him.

“…and a very sad group of people,” he went on, “is trying to disenfranchise that group of people and we won’t stand for it.” Here, yet again, in attempting to report what the reigning Mr. Nuclear Football has said, one must struggle to parse a wad of words that spit in the face of coherence.

Either due to ignorance, or to attain some political end through the feigning of ignorance, or, quite plausibly, both, Trump is characterizing a vote for his opponent as an illicit civil rights violation.

“We were getting ready for a big celebration. We were winning everything, and all of a sudden it was just called off,” the big baby whined.

“The results tonight have been phenomenal, and we are getting ready—I mean, literally, we were just all set to get outside and just celebrate something that was so beautiful, so good, such a vote, such a success…. The citizens of this country have come out in record numbers, this is a record—there’s never been anything like it—to support our incredible movement.…” Here the Leader of the Free World (by default) briefly trailed off into a fugue state, irrelevantly citing large leads in vote counts in states which would have voted for anyone, breathing or not, who was willing to accept the label, “Republican.”

“…and all of a sudden everything just stopped,” Trump said, dragging himself back into the present. “This is a fraud on the American public. This is an embarrassment to our country.

“We were getting ready to win this election,” he said, his tone of voice quickly shifting from melancholic to choleric.

“Frankly we did win this election. So our goal now is to ensure the integrity…for the good of this nation…this is a very big moment.” A big moment indeed. Even the pretence of coherence was briefly lost, as if the specter of an indictment from the Southern District of New York had suddenly appeared before him.

“This is a major fraud in our nation. We want the law to be used in a proper manner.” Why not, one might ask. There’s always a first time.

“So we’ll be going to the U.S. Supreme Court,” said the President. Lacking a lower court ruling to appeal, though, his only standing there would be as just another spectator. Perhaps he was presuming that, since he was able to appoint one-third of its justices, thanks to an extraordinarily brazen act of non-feasance on the part of the Senate Majority Leader, he would get the benefit of special treatment.

“It’s very sad,” said the superannuated poor little rich kid, briefly losing the thread again. “It’s a very sad moment to me. This is a very sad moment…” The former reality TV “talent” got his emotions under control, though, before be began blubbering at the podium.

Rallying all his faculties of delusion, Trump concluded his airing of grievances with a pledge to go Full Authoritarian: “we will win this and we as far as I’m concerned we already have [won].”

It was a victory speech unlike any other. Who would utter a rambling, disjointed, self-pitying victory speech—while he is being defeated? Yes, yes, we know—the question answers itself.

Though no official result has been announced, at the present time—late on Thursday night, if you must know—it seems virtually certain that, barring some deus ex machina (to which we shall return), our 45th President will only serve for one single, very sad term. [We use the term “serve” knowing full well that in this case it hardly applies. We can’t be expected, though, to rebuild every component of the language while getting out a newspaper, too. – The Ed.]

His accomplishments during that time—which no one would call short—have been truly astonishing.

Respect for the nation abroad, to the extent that any remained after the George W.[MD] Bush administration, has largely been replaced by pity in civilized nations. In autocracies, of course, our stock has risen.

What pushed the economy over into a tailspin was, of course, the pandemic. A tiny little virus was able to do this because, despite having inherited one Emergency Pandemic Plan from his predecessor, and having another one written by his own maladministration, when confronted with an actual pandemic, our soon-to-be-departing Chief Executive ignored them both. Instead he lied, dithered, and ignored it, when he wasn’t actively exacerbating it. He even tried to profit from it. Someday, if there’s ever a full accounting, it will doubtlessly be shown that he made things worse in every conceivable way—and a few others, besides.

It takes a true visionary, for example, to visit multiple states where the rates of new infections are reaching new peaks, hold rallies at which thousands of unmasked people gather, then leave them stranded, without transportation, in the cold and dark. Or, in one case, perhaps for variety, do the same thing down south in the middle of the day, throwing a little heatstroke into the mix. Who else would even run for re-election, with a first-term death toll rapidly approaching a quarter million?

Members of the reality-based community could be forgiven for entertaining thoughts, on Monday, of a great Blue Wave washing clean Trump’s Augean stable. Yet, somehow, at midnight on Thursday, the incumbent was trailing his challenger by only four million votes.

The great Isaac Newton modestly said, “If I have seen further it is by standing on the shoulders of Giants.” Trump would not hesitate to take credit for having debased our politics sufficiently to account for this counter-intuitive result. In fact, though, he’s crouching beneath the roving moral midget who declared, “We’re an empire now, and when we act, we create our own reality. And while you’re studying that reality—judiciously, as you will—we’ll act again, creating other new realities, which you can study too, and that’s how things will sort out. We’re history’s actors…and you, all of you, will be left to just study what we do.”

Harmeet Dhillon, a co-chair of Lawyers for Trump, did her part Thursday. Speaking with Fox News’ Lou Dobbs, she said, “We’re waiting for the United States Supreme Court—of which the President has nominated three justices—to step in and do something. And hopefully Amy Coney Barrett will come through.”

Not to be outdone, Newt Gingrich, also on Fox News, said, “You have a group of corrupt people, who have absolute contempt for the American people, who believe that we’re so spineless, so cowardly, so unwilling to stand up for ourselves, that they can steal the Presidency.” In keeping with his sixty-year record of being always wrong but never in doubt, he was referring not to his own party, but to Democrats.

It has long been an American tradition: every Inauguration Day, broadcast journalists utter in their most pious tones a phrase from our secular catechism: “Blah blah blah…witnessing, once again, that most American of miracles, the peaceful transition of power.” Someone get us re-write.

Here’s a question for Poli Sci majors: Was there a rise in the use of the phrase “peaceful transition of power” after Newt Gingrich became Speaker of the House? We ask because it’s the sort of thing one would be more likely to notice as the alternative became more likely.