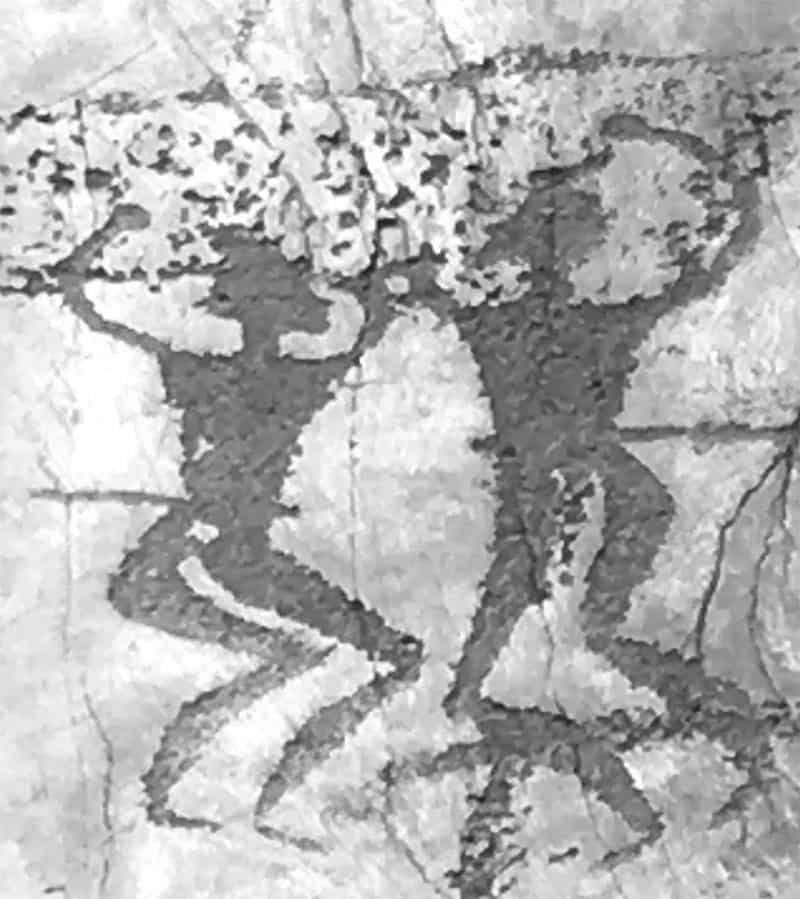 Petroglyph of a couple, possibly Neolithic, in Sarmishsay, Uzbekistan. Detail of a photo by Stephanieadams99; from commons.wikimedia.org; Licensed under creativecommons.org/licenses/by/4.0/.

We take pride in our modern civilization for being advanced and forward-thinking while judging indigenous people as primitive and backward. According to Anthropologist Wade Davis, what we have accomplished is a “stunning innovation in human affairs, the sociological equivalent of the splitting of the atom⁠.” 1

For the first time is history, we have created “a new and original culture” that celebrates personal freedom over community and consumption as a way of life over sustainability. Our stunning innovation is an illusion comparable to looking at the world through the wrong end of a telescope.

As the world’s first de-indigenized culture, we have broken with all human history, according to this 2013 article in Yes Magazine. But it has come at an exceptional cost. Utilizing the external muscle of fossil fuels while extolling selfish individualism, we are the first society on earth not to be “enmeshed within networks of communities and relations with the land.”

Unfortunately, the consequences of our ground-breaking experiment are now coming due. Radical individualism has now reached the point where it has paralyzed our government and endangered our citizens; we can see this in our deadlocked Congress that is unable to agree upon a desperately needed Covid rescue package while, at the same time, in the name of freedom, hoards of demonstrators are protesting government mandates to wear masks, one of the few proven methods to slow down the corona carnage until a vaccine arrives.

Our roads and bridges and public transportation have decayed until they resemble that of a third world country. Of course, the 800-pound gorilla in the room is catastrophic climate change, which our president, a fitting one for a de-indigenized nation, calls fake news.

Human greed and selfishness have corrupted our democracy and plundered our planet of its precious living resources. We are becoming a huge blazing meteorite, lighting up the sky in technicolor, still puffed up with how great we are, until, in one last colossal blast of fireworks, we will plummet through the atmosphere to our death and that of our beloved spaceship Earth.

What can be done? In my grief, I turn to Joan Halifax, born in Hanover, New Hampshire in 1942. She is a wise women who has earned her laurels in celebrated careers as an anthropologist specializing in indigenous cultures, hospice caregiver, ecologist, and Zen Buddhist teacher.⁠2

She offers an antidote to our de-indigenous culture, which has stolen our soul and replaced it with a computer algorithm on a chip, programming us with a single task: shopping until we drop. Our only hope, she says, is to regain our indigenous wisdom.

Indigenous people, along with Buddhists, reject the notion that we are separate, isolated atoms. Instead, they assert we are all connected souls, immersed in a great, flowing river going back to the beginning of time: “Just as our mother and father live inside us, so do generations upon generations of mothers and fathers before them.”

The root of the problem we face today is that we have lost touch with the souls of our ancestors and, in the process, lost our own. Our survival and our sanity depend on learning to honor where we came from, not only venerating our human ancestors but all life forms. As Halifax poetically describes it:

“We are connected to the dead in ways not commonly remembered. The bones of the ancestors lie in the body of Earth and are transformed into the bodies of plants and creatures, including ourselves.”

“The great trees of tropical and temperate forests, by feeding on the decaying remains of countless plant and animal species, literally translate the past into our atmosphere…[supplying us] the very air we breathe.”

Indigenous people venerate their ancestors because they understand all beings are integral parts of our existence—past, present, and future—interconnecting and interpenetrating in the great river of life.

Halifax says that until we get out of our heads and give birth to our ancestors, Earth cannot be redeemed from its suffering. “To exclude, consciously or unconsciously, any species from the continuum of existence is to deny a part of ourselves.” And to spell our doom.

Benjamin Franklin expressed this wisdom with a different metaphor during our American revolution: “We must, indeed, hang together or, most assuredly, we shall all hang separately.”