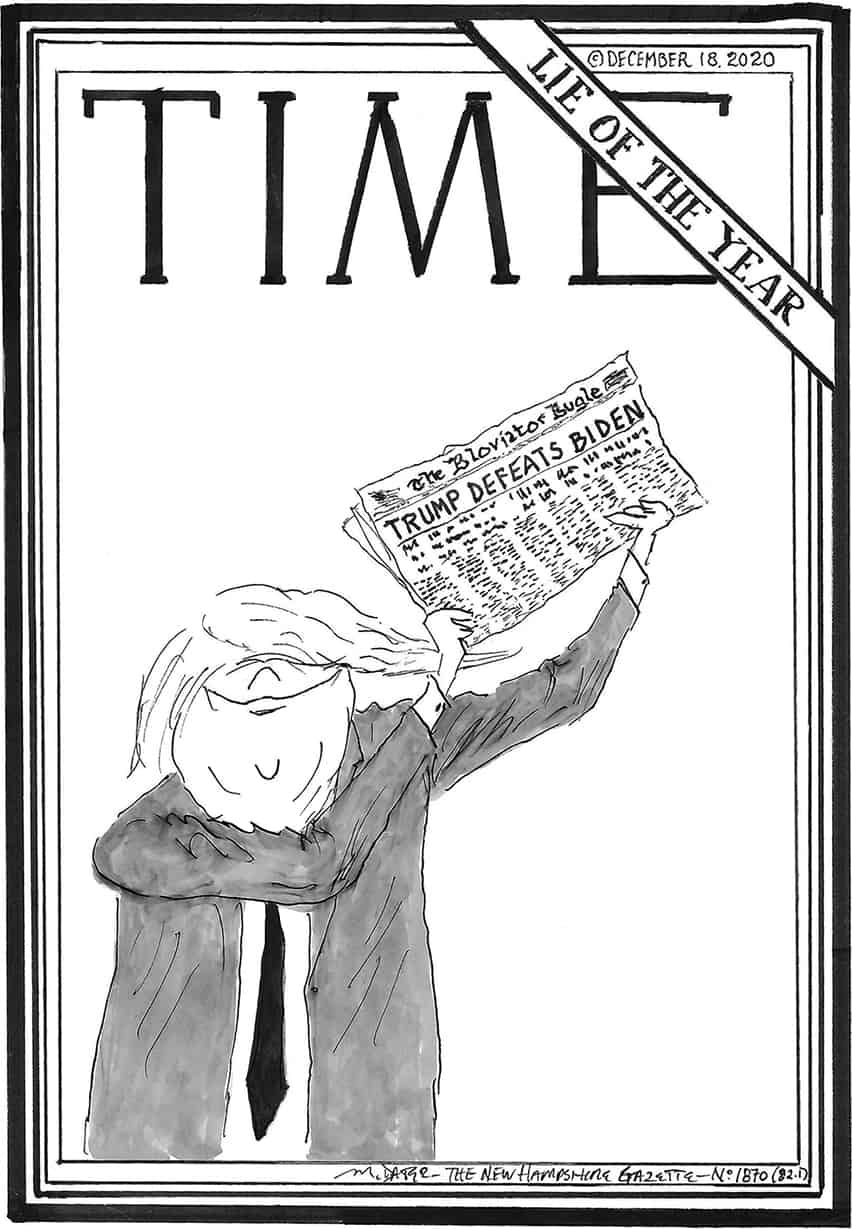 Monday was disorienting. A good day? But…isn’t this still 2020?

Yes, it is, and so it’s no time to let down our guard. But, as with November 3rd, it was a good day regardless: health care workers began receiving vaccinations against the plague, the worst Attorney General in U.S. history quit, and the Electoral College—perhaps the least-loved feature of that anachronistic contraption we call our Constitution—passed up a prime opportunity to bite democracy on the…posterior.

We who have escaped death by the virus—thus far, anyway—and resisted, perhaps, the siren call of the gas stove, bridge abutment, or tall building, owe it to ourselves to hold Monday, December 14th, in our hearts and cherish it forever. Because we’re going to need it, and every other touchstone, fetish, talisman, and superstition we can muster in 2021, which is likely to be terrible, too.

Presumably he’ll retreat to his stately white mansion in McLean, Virginia. It’s funny, but to look at this impeccably-maintained $2.5 million showcase, you’d never guess that the owner’s father wrote Space Relations, a science fiction novel about intergalactic oligarchs who rape teenagers,* and elevated the uncredentialed Jeffrey Epstein into the rarified circles of Manhattan society, thus launching his career as an overachieving child molester.

In real estate, they say location is everything. In this case, Chez Barr is a convenient ten-minute drive from the headquarters of his first employer, the Central Intelligence Agency. Not that we have any particular suspicions about the Agency or its former analyst and Congressional liaison; we just automatically assume they’re up to something.

Why would Barr quit now, though, just a few work days before Christmas? Our guess is that he knows what’s afoot—a wave of pardons which will make the incumbent’s previous abuse of that presidential power look like jaywalking by comparison—and he doesn’t want to get any of the legal residue on his Florsheims.

Besides, one of his grandest schemes was already in motion; he could sit back, surrounded by all the comforts of home, and watch it unfold from afar. It’s not as if the warden needs him at Terre Haute to push the poison plunger.

It’s really been quite an accomplishment. Thanks to Barr, the Justice Department—after what it referred to as a “nearly two decade lapse,” subtly making the point that killing people is a core function—is on track to kill 13 people before Joe Biden takes over and spoils the fun.

As achievements go, it lacked the more profound ramifications of steering Donald Trump between the Scylla and Charybdis of Robert Mueller and impeachment. One must give him credit, though: it isn’t easy for an overweight, 70-year old man—especially a professedly-devout Catholic—to safely become a serial killer.

Barr is now gone, but fans of injustice need not fret; it’s not as if he left the Department in good hands.

His deputy, Jeffrey Rosen, had been at the Transportation Department, where he generously rolled back tailpipe emission standards, enabling the mighty engines which drive our economy to once again breathe free. Humans? Not so much. The climate? Tough luck.

Moving from Transportation to Justice may seem an unlikely transition, but Rosen has shown that his values have remained intact. When the President’s former campaign manager Paul Manafort was about to land in Rikers Island, Rosen stepped in and got him sent to a cushier federal lockup. And why not? All Manafort ever did was help tyrants and would-be tyrants achieve their goals: acquire a country estate with its own private lake, complete with galleon and nearby zoo; finagle the presidential nomination of a major U.S. political party….

Rosen understands that we face a grave threat to public order—namely, the public: random citizens joining together and claiming, for example, that Black Lives Matter. He wrote to federal prosecutors in September that it’s time “to consider the use of a variety of federal charges when they may be appropriate, including seditious conspiracy.”

The Electoral College gave the victory to Biden Monday, but Tuesday made it official. This aspect of Constitutional law is often overlooked. If one party in a two-party system goes for broke because it’s demographically doomed, and the other lacks the gumption to make the it pay for its transgressions, then the Constitution says whatever the hell the first party says. Many assumed that the Constitution gave Barack Obama the right to fill a Supreme Court seat. The Senate Majority Leader had other ideas and gave himself a veto.

Now, somewhere in that cross-wired brain of his, even The Donald understands: for the last forty-seven months he’s had a magical power which forced everyone to show respect…to his face, anyway. Now, he’s lost it.

What does that make him? Some poor little wad of repressed neurons, buried deep in his addled amygdala, is hissing at him, Gollum-like, “loser, loser….”

“In his moments of deepest denial,” CNN reported yesterday, “Trump has told some advisers that he will refuse to leave the White House on Inauguration Day, only to be walked down from that ledge.” He can’t even legally use Mar-a-Lago as his residence—and, for once, the law could prevail. What’s a would-be tyrant to do?

* Eight used paperback copies were on offer recently at Abebooks.com. Prices ranged from $111.26  to $517.43, depending on condition.