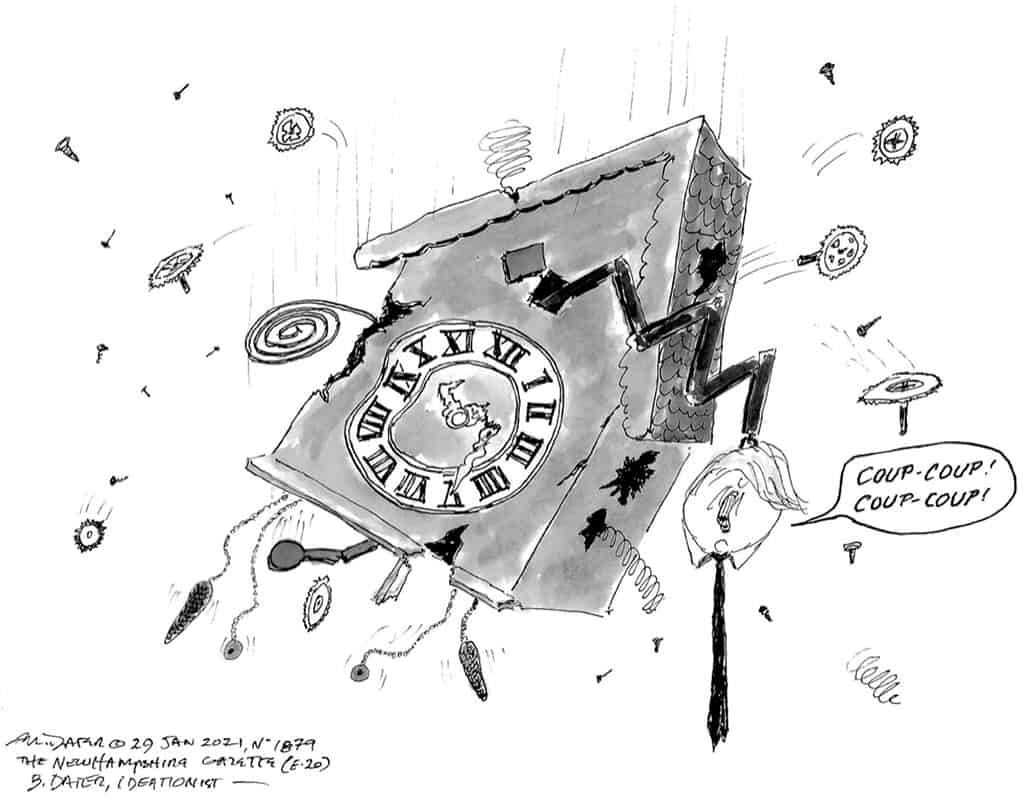 It is tempting to think of January 21st as an historic day for the U.S. of A. Finally, after four harrowing years, a full day passed when the Executive Branch was not being attacked with a saw by a fool sitting out at the far end of it.

Congratulations, America. Just don’t get too cocky. To extend our arborial metaphor, you’re not out of the woods yet.

On this semi-auspicious occasion, we beg the reader’s leave to draw upon our seniority in the ranks of American journalistic enterprises—indeed, our history covers a full 46 percent of the time since Gutenberg first hawked a Bible—and express our dismay at still having to report on sorts of beliefs and behaviors which many thought were regressive and ignorant back in the 15th century.

Close readers may have noticed that, in these paragraphs, our editorial voice has assumed a stance which places it outside the bounds of the nation’s body politic.

We do this as a reminder to all, ourselves included, that the existence of something today is no guarantee of its existence tomorrow: a general rule which applies to everything from snowbanks to newspapers and democratic republics.

Having reported on the Revolution and the adoption of the Constitution—as Casey Stengel would say, you can look it up—it is alarming now to find ourselves apparently covering a devolution. Even worse could await. If some of you people don’t shape up, we may be reporting on your dissolution.

Flawed as it is, were we to live in a world without the U.S.A., we expect we would probably miss it. Of course, people in abusive relationships sometimes say the same….

The potential for this dire outcome has quite literally been present from the beginning. Upon leaving Independence Hall on Monday, September 17th, 1787, Elizabeth Willing Powel asked Benjamin Franklin, “What do we have, a republic or a monarchy?” to which Franklin replied, “A republic, if you can keep it.”

Ironically—because everything has to be ironic, these days, it’s the law—no one loves to quote that exchange more than a Republican. We’d guess that’s because its portentousness tends to enhance their feelings of self-importance. Talk about coals to Newcastle.

Neil Gorsuch even had the gall to use Franklin’s phrase as the title of a book he wrote. Published in 2019, it “reflects on his journey to the Supreme Court, the role of the judge under our Constitution, and the vital responsibility of each American to keep our republic strong”—lofty talk for a man who sits in a stolen seat.

Fortunately Gorsuch will have no role in the Senate trial of former President Donald J. Trump—assuming that there is one.

Hard though it is to believe, even though he browbeat Georgia’s Secretary of State, attempting to extort fictitious votes, and exhorted a mob of his lied-to followers to storm the Capitol in a bid to overturn the results of the election he lost, it is now nevertheless a truth universally acknowledged—within the deranged confines of his own party—that it would be unconstitutional to try Trump for inciting an insurrection.

To put this curious assessment into the right perspective, we turn to Mrs. Betty Bowers [@BettyBowers], well-known adjudicator of propriety. She asked, on January 25th:

“Q: What do you call incitement to insurrection that goes unpunished?” Ever thoughtful, she answered her own question:

Another apt question right about now would be, “why is this even a question?”

Lately it seems that all the usual suspects in the upper echelons of the journalism racket have been checking in with their legal experts on an hourly basis. It’s tough to stay on top of things when you’re forced to carefully assess every random cloud of squid ink spewed by a score of Republicans, each one desperate to keep their own raft from hitting the rocks.

Another voice on a less-formal venue does a fine job of turning the issue right side up. @BreeNewsome tweeted recently, “Republicans have successfully manipulated the U.S. news cycle to revolve around an asinine debate over whether there should be an impeachment trial instead of the reality that we’re still in the midst of an insurrection—proving that the problem was not Trump, but weak journalism.”

“[W]hat is the journalistic value,” she asks, “of filling the airwaves with people who you know: 1) spread disinformation about the election, 2) attempted to overthrow the election by illegal means, [and] 3) participated in a violent, deadly insurrection,” when you know that they will use their on-air time “to make more bad faith arguments?

“Everyone’s been jumping on the social media companies around censorship & ethics,” she went on, “but we need to pause & examine why social media outlets are arguably showing more ethical responsibility in this moment than major press outlets that have far more audience reach.”

At this juncture we would like to briefly address any readers who may feel it is incongruous for a paper in its 265th year to make such liberal use of Twitter. We would only ask in reply, how do you think we could have lasted this long, if we were unable or afraid to use the latest in technological whizbangery?

With that out of the way, we’ll close with a pair of pearls from that same oyster. Together they constitute the only conceivable valid argument against the impeachment of…that guy of whom we are so tired.

Monday, Maggie Haberman of the New York Times tweeted that “two people in touch with Trump described him as ‘bored out of his mind.’”

To that, Kurt Anderson responded, “He’s an addict (adrenaline, cortisol, attention, &c.) in withdrawal, so here’s a looming irony: if and when he’s prosecuted it could make him feel better.”

Anderson’s point may well be true. But, we don’t care. Even if it does make him feel better, we still think he should be impeached—and convicted. And [fill in the blank]. And [fill in another blank] &c., &c., ad infinitum.