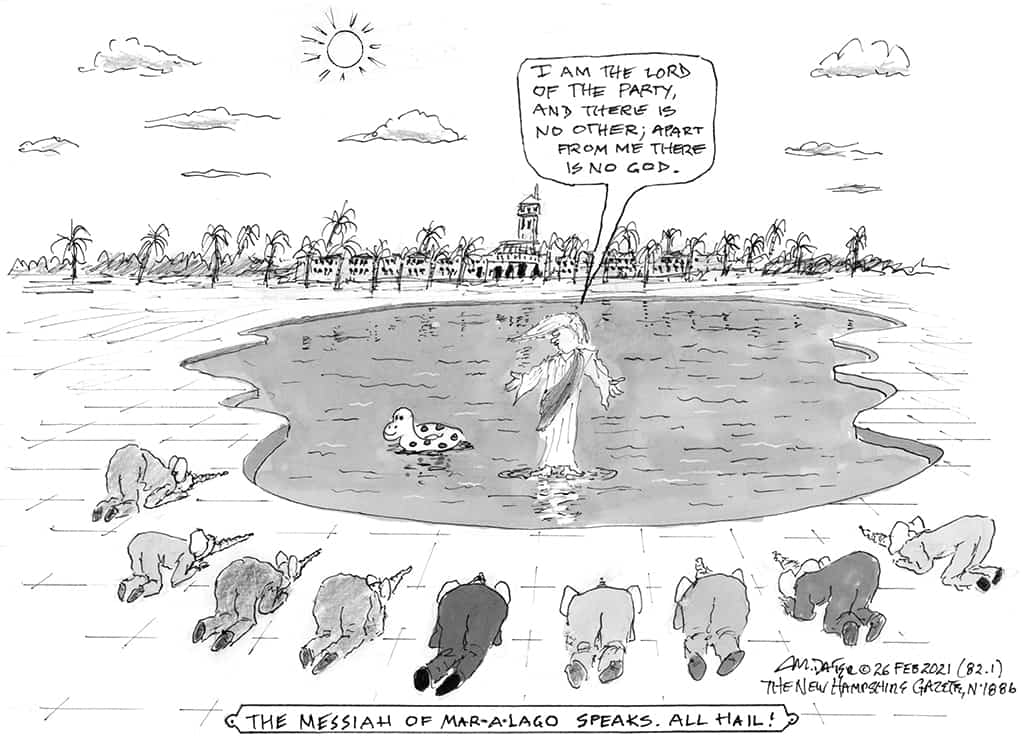 The Conservative Political Action Conference [CPAC] for the Year of Our Lord 2021—we hope they appreciate that pious flourish—began yesterday in sunny, socialistic Orlando, Florida.

Sure—what else would you call a place that requires everybody to wear a mask, just to keep the rest of its puny citizens alive?

Orlando is the Seat of Orange County, which is ruled—with an iron fist, of course; mustn’t leave out that important detail—by an elected mayor and six commissars. They claim to be “commissioners,” but let’s keep it real: only one of those seven is a Republican.

It’s probably safe to assume that the true purpose of the County’s mask mandate is to train the proletariat to obey the will of the commissars. They would claim otherwise, of course, perhaps citing some alarmist narrative in the liberal media as justification for their tyranny.

If so, the New York Times stands ready. It was claiming on Thursday that anyone in Orange County faced a “very high risk” of becoming infected with the virus some say is causing the alleged Covid-19 pandemic. ICU occupancy is above 74 percent; test positivity is also high. That suggests, according to the Times, that actual cases may be being undercounted.

The Times may be confusing Covid infection stats with 2020 Census figures on resident Hispanic non-citizens—those are supposed to be undercounted.

This annual Right Wing Festivus is billed as “The largest and most influential gathering of conservatives in the world.” In theory, that could be true; based on that ilk’s record, though, we wouldn’t bet on it.

We’re not sure these people are even conservatives. The Hyatt Regency, the site they chose for their convention, has a mask mandate of its own. Does that mean attendees will be forced to wear two masks, one for the County and one for the Hyatt? Didn’t Dr. Anthony “The Little Fascist” Fauci just recommended two masks? Are we supposed to believe this is all just a coincidence? Sheesh—just march into the gulag, why don’t ya?

[Sound effect of static crackling…] Woops—stand by…. This just in: we have a report that a golden calf has been sighted at the Hyatt.

Here’s the video—two men are trundling something along a soul-less corridor on a wheeled pallet…but that’s no golden calf. That’s a larger-than-life, gold-plated effigy of Donald Trump wearing flag-themed shorts and flip-flops.

We take it all back. They are conservatives. Or perhaps we should say, they’re “Conservatives.”

Not so very long ago—back when the editor was still learning his letters—there was a Senator from Ohio named Robert Alphonso Taft, Sr. The son of the 27th President, who became a Chief Justice, Taft was often called “Mr. Republican.”

How in the ever-loving world, one has to wonder, did the GOP devolve from “taciturn and coldly intellectual” Bob Taft to Donald Trump?

Here’s our version of the story:

Nixon demonstrated unequivocally that it’s possible to be simultaneously a hard-core Republican and a crook. More importantly, he proved that you could be a fairly unrepentant crook, and still be eventually rehabilitated.

After Ford fanned some of Nixon’s stench away, Ronald Reagan came along and cleared a new path—or clearcut the forest. Citing the increase of viewing options made possible by cable TV, he nixed the Fairness Doctrine. His position on the matter was firmly sited in conservative doctrine; no one has any right to expect the state to promote fairness. Thomas Paine, of course, would be appalled. Such a position directly conflicted with everything he ever wrote.

Given free rein by Reagan, Rush Limbaugh prepared the soil. Freed from the minimal constraint of giving equal time to opposing views—sane ones, for example—Limbaugh’s employers lined their pockets by allowing him to vent his noxious spleen.

Limbaugh’s audience—disgruntled people who were even then being cast aside by an economy that had no use for them—found his act intoxicating. They learned that they were not alone. They wanting someone to blame for their woes; Limbaugh offered them women and people of color. Hating innocent victims proved easier than figuring out that they, too, were victims of the system making Limbaugh rich.

Then along came Newt. In 1994, reaping a bountiful harvest of the now-chronically enraged, Gingrich converted their energy into support for his “Contract With America,” a package of policies designed to amplify the causes of their miseries. Contract On America would have been more accurate.

After 40 years of Democratic control, the House flipped in a landslide. The freshmen class of Republicans made Limbaugh an Honorary Member of Congress.

Now, as the decedent himself was wont to say when a decent person expired, Rush Limbaugh “has assumed room temperature.” The GOP is charging ahead, though, on the path he blazed. Perhaps it’s a coincidence, but the stage at CPAC is shaped like the Norse rune “odal,” which SS troops wore on the collars of their uniforms.

Dolt #45’s closest allies are playing hookie from the House, citing “the ongoing public health emergency”—for which they won’t wear masks. They’re on the schedule in Orlando, though—can’t be among the missing when it’s time to bow to the golden effigy, up on the Nazi stage.