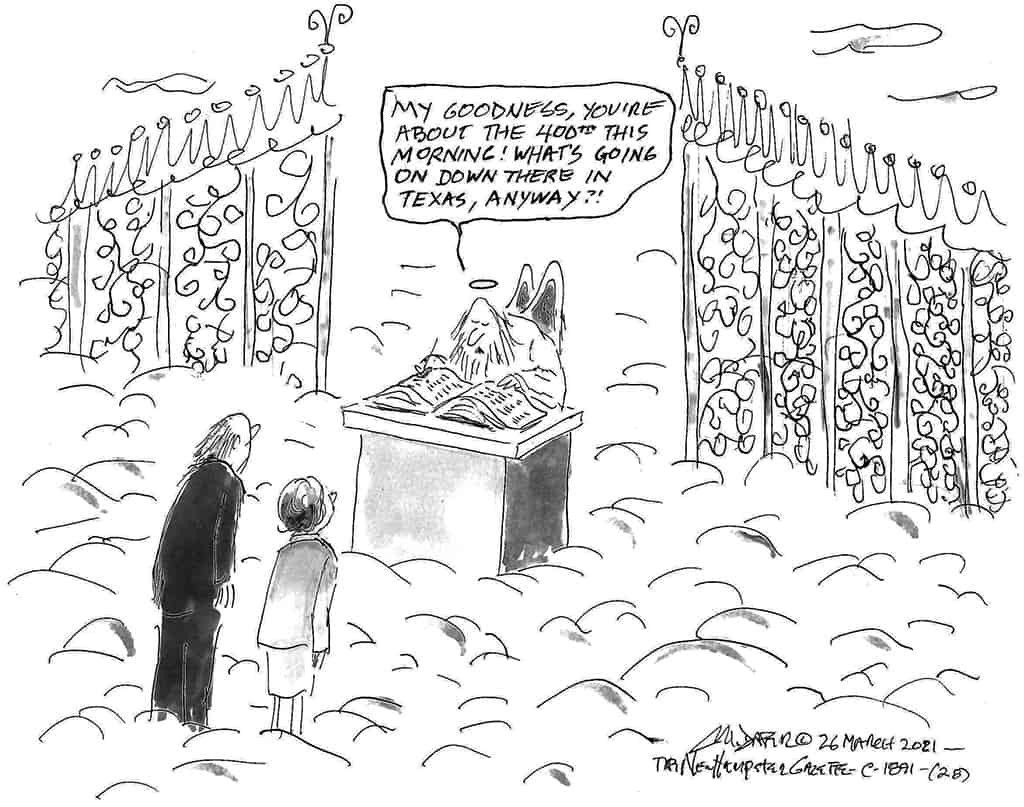 Since we last went to press—well, since we last published—two apparently deranged men have allegedly gone on separate killing sprees, in Atlanta, Georgia, and Boulder, Colorado. We regret having made that sentence less succinct than it might have been, but the nation’s laws pertaining to libel are more stringent than those on guns.

It may be disconcerting, but it cannot be denied: America is getting back to normal. Democratic legislators are calling for a ban on assault weapons, while Republicans are focusing their attention on the Democrats’ choice of words.

The Republicans do have a point here. A number of Democrats have called the Boulder shooter’s Ruger AR-556 “an assault rifle.” That’s absurd—it’s not a rifle at all.

True, the AR-556 is a semi-automatic firearm, the guts of which are based on the design of the familiar M-16, made popular by the Vietnam War. However, the barrel of an AR-556 is only 10.5 inches long.

Common sense would call that a short-barreled rifle, as would the National Firearms Act [NFA]. The NFA places certain restrictions on several categories of weapons: the aforementioned short-barreled rifles, similarly-truncated shotguns, full-auto machine guns, grenades, and the catch-all, “destructive devices.”

That is why Ruger calls its AR-556 a pistol. If it was called a [short-barreled] rifle, would-be purchasers would not only have to pay $200 for a special license, they’d have to pass a particularly rigorous background check. Ruger would never make its sales targets, and the Boulder shooter would still be waiting and wondering if he’d be cleared.

This nomenclature-based loophole raises an intriguing question: why doesn’t some enterprising grandmother open a bakery and sell “Grannie’s Special Patriotic Pies?” With a home-poured cast-iron crust and delicious black powder filling, they’d liven up any Fourth of July.

The “pistol” version, shown here, came on the market in March, 2019. With an overall length some seven inches shorter, it is far more concealable, and thus bound to gain market share among the coveted mass-murderer demographic.

Lest we raise the ire of possibly-armed Republicans through careless word choice, let us now discuss the L-shaped dingbat on the left end of the image above. It looks like a buttstock, and it will function (poorly) as a buttstock. It’s not a buttstock, though, because that would make this pistol a rifle.

A recent article in The National Interest explains this fine point: “pistols do not have buttstocks and are typically not fired from the shoulder. The Bureau of Alcohol, Tobacco, and Firearms however recently declared arm braces on AR-15 ‘pistols’ are in fact legal, even when the ‘braces’ are incidentally capable of firing (though not comfortably) from the shoulder.”

Therefore it’s an arm brace: a pair of flaps which allow the user to strap a firearm onto his or her forearm. Think Bruce Campbell, as Ash Williams in the Evil Dead, but with an AR instead of a chainsaw.

Sooner or later plastic surgeons will make these braces obsolete.

We would be neglecting our duty as a newspaper if we failed to cover the local angle on this story: Sturm, Ruger & Co. is one of this state’s larger employers.

Founded in Connecticut in 1949, the gun maker established its Pine Tree Castings division in Newport, N.H. in 1963. About 1,200 employees work there.

Newport is among the towns which have been suing the state since 1990, in a dogged effort to make it live up to its constitutional responsibility to provide funding for an “adequate” education—because God knows you don’t want to get too lavish or anything.

It’s paradoxical, if you think about it. You can’t get an adequate education in Newport, but the workers there, substituting rifles and pistols for waves and particles, can build you a gun demonstrating Heisenberg’s Uncertainty Principle.

If you think that’s strange, consider Sturm, Ruger co-founder Alexander McCormick Sturm. This polo-playing scion of the “Reaper Kings” was an OSS officer during WW II. Later he attended Yale, where, disdaining its Ivy League cafeteria, he wore custom-tailored suits and dined at the restaurants of New Haven’s finest hotels. He married Teddy Roosevelt’s granddaughter before dying of viral hepatitis at 28. But we digress.

Sensitive readers shuddering at the local connection with the Boulder AR-556 may be somewhat relieved to know that, though some of its components were probably cast in Newport, the pistol itself was assembled and finished in the company’s plant in Mayodan, North Carolina.

The Ruger plant in Newport ships its parts south, but there are no indications that the jobs will follow—luckily for the town and the state. New England’s textile jobs went south long ago; more recently our shoe industry shipped off to Asia. Capital and guns both seem quite adept at eluding regulation.

Liability insurance is mandatory in nearly every state for owners of private motor vehicles—New Hampshire, of course, being one of two proud exceptions. Some have suggested that a similar arrangement for gun owners might help.

Ain’t this America, though? Between the Republicans’ disdain for democracy and their lock on the Senate, smart money can only expect the madness to continue.

Wake us up, though, if somebody finally busts the filibuster.