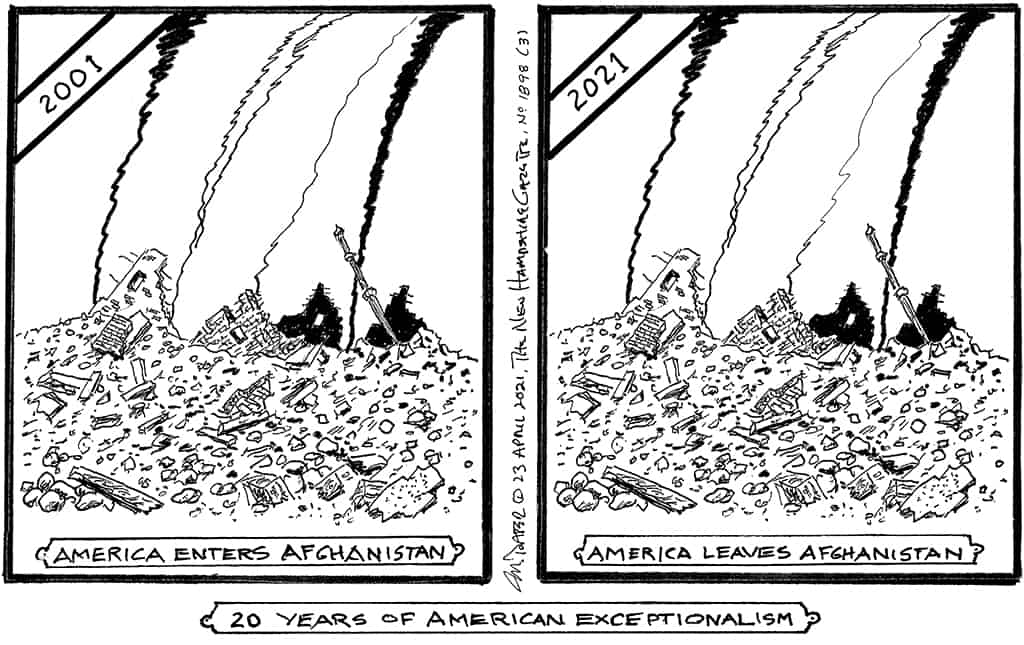 President Biden vowed last week that he would pull all U.S. troops out of Afghanistan before September 11th. Pointedly, he chose to speak from the White House Treaty Room. It was there, he noted, in October, 2001, that President George W. Bush “informed our nation that the United States military had begun strikes on terrorist training camps in Afghanistan.” Twenty million Americans have been born since Bush made that announcement. They can truthfully say, “we have always been at war with Central Asia.”

When Bush spoke, operations had already been underway for 11 days. A Soviet-built helicopter with a CIA pilot had flown in-country with a seven-man team of “special operators,” selected from the Army, Navy, and Marines. This even representation among the branches of service was no doubt based on the particular sets of skills each individual brought to the task. One would hate to think that it stemmed instead from an agreement among the brass hats to evenly parcel-out all that prospective glory.

In addition to lethal skills and whatever weapons they carried, the team brought one more essential: a substantial quantity of finely-engraved portraits of an American Founding Father. One can only wonder what socially-conservative Afghan elders would have thought of Ambassador Franklin’s shenanigans in France.

The primary objective of this daring mission, of course, was to track down Osama bin Laden and bring him to justice—dead or alive. By November 21st, though, the administration’s attention had wandered. Speaking to Defense Secretary Donald Rumsfeld, Bush didn’t ask about bin Laden. He wanted to know, ‘‘What kind of a war plan do you have for Iraq? How do you feel about the war plan for Iraq? … Let’s get started on this.”

The CIA’s chief for Afghanistan went to the White House to warn Bush and Cheney that “the Afghan campaign’s primary goal of capturing bin Laden was in jeopardy because of the military’s reliance on Afghan militias at Tora Bora.” He specifically told Bush, “we’re going to lose our prey if we’re not careful,” and recommended that the Marines or other U.S. troops be rushed to Tora Bora.

In mid-December, though, as a Senate committee reported in 2009, bin Laden “walked unmolested out of Tora Bora and disappeared into Pakistan’s unregulated tribal area.”

“In the aftermath of bin Laden’s escape, there were accusations that militiamen working for the two warlords hired by the CIA to get him had helped the Al Qaeda leader cross into Pakistan. Michael Scheuer, who spent 15 years working on Afghanistan at the CIA and at one point headed the agency’s bin Laden task force, was sharply critical of the war plan from the start because of its reliance on Afghan allies of dubious loyalty. ‘Everyone who was cognizant of how Afghan operations worked would have told Mr. Tenet that he was nuts,’ Scheuer said later. ‘And as it turned out, he was. … The people we bought, the people Mr. Tenet said we would own, let Osama bin Laden escape from Tora Bora in eastern Afghanistan into Pakistan.’” [Emphasis added.]

By 2009, though, nobody cared. CBS News’ item on the report ignored the incompetence and distraction and focused on a figleaf: “At the time, Rumsfeld expressed concern that a large U.S. troop presence might fuel a backlash…others said the evidence was not conclusive about bin Laden’s location.” No mention of Iraq at all.

Had those swaggering “operators” brought the head of Osama bin Laden back to Bush in the White House, he would have had ample political cover for a withdrawal: “Mission Accomplished,” and all that.

Not that anyone on the right would have seen the wisdom in that. In their view wars are for starting; ending them is work best left for some other chump. This is a longstanding Republican policy, perfected exactly half a century ago. Like bin Laden walking into Pakistan, it’s a scandalous, hardly credible tale—but once again it’s true.

As a lowly E-5, keeping the commies at bay with a Speed Graphic press camera, the editor, along with many other disgruntled enlisteds, simply assumed that Richard Nixon’s then much-touted “secret plan to end the war” was designed around one objective: getting re-elected. Lacking any evidence, though, we couldn’t prove it.

Later the world learned that Nixon had taped his own confession. Ken Hughes, a highly respected historian at the University of Virginia’s Miller Center, spent 20 years studying those tapes. He has distilled what he learned into two explosive books which have been lauded by historians and ignored by the punditocracy.*

The first, Chasing Shadows, begins with Nixon ordering his Plumbers “on a thievery basis [to] Goddammit it…get those files. Blow the safe [at the Brookings Institution] and get it.”

What was the “it” behind this felonious command? Non-existent evidence which Nixon feared would prove what he knew damn well he had done—derailed the Paris Peace Talks to win the ’68 election.

Bad as that was, Fatal Politics may be worse; with Nixon it’s always hard to tell. He had known from the start that “Vietnamization” could never work. Thanks to Henry Kissinger, though, he was able to strike secret multilateral—and treasonous—agreements with Moscow and Peking. They would restrain Hanoi long enough to preserve South Vietnam for a “decent interval” following the 1972 election. After that, Hanoi would be welcome to do as it liked—no skin off the President’s oddly-shaped nose.

For half a century Republicans have blamed Democrats for the “loss” of a nation that never existed. Get ready, everybody, because here it comes again.