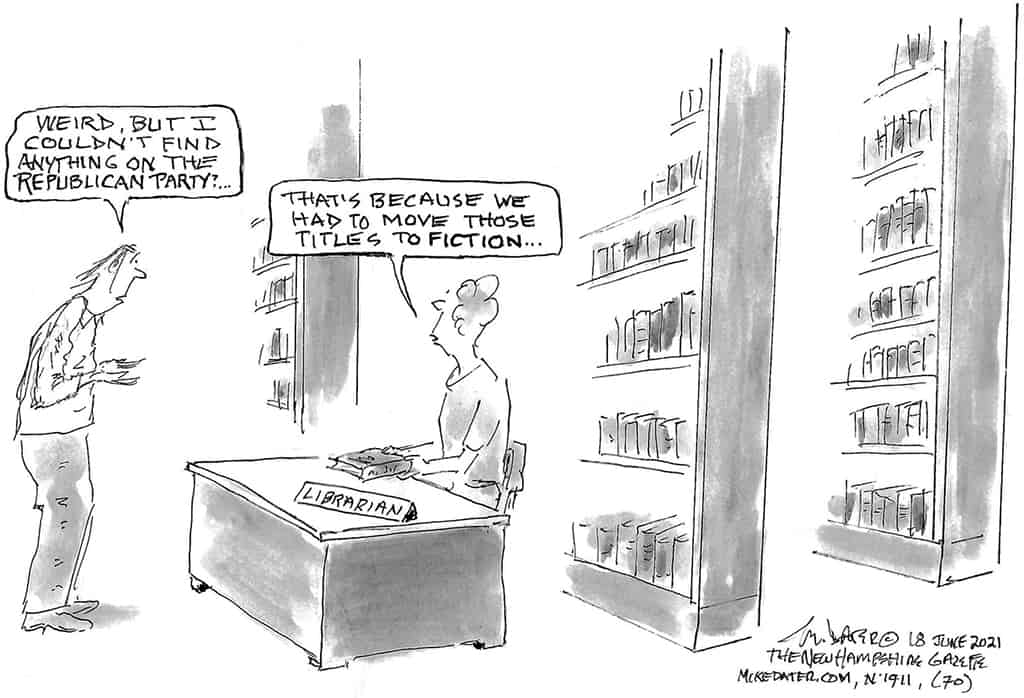 We do our best to keep up. In theory, that’s most of the job: try to keep up, and write about the stuff that really matters. These days that boils down to tracking dangerous outbreaks of authoritarian lunacy. This can be unnerving—especially in the context of a formerly-natural environment whose expiration date seems to be getting a fortnight closer every dang week.

In a perfect world we’d be maintaining a sophisticated database for this purpose. Cross-tabulation analysis would no doubt be useful in sorting out the misleaders from the misled, the grifters from the true believers, and the charlatans from the congenitally bewildered.

Having a handle on the character of the actors involved could be of great help when trying to determine if some bizarre event is evidence of a criminal conspiracy, the serendipitous confluence of separate strains of stupid behavior which could nontheless lead to an accidental but complete societal breakdown, or merely another Fortean example of the universe being kinky.*

The staggering volume of such incidents means, though, that merely entering the data would consume far more labor than we currently expend on this whole operation. Furthermore, in a perfect world such a thing would be superfluous.

Rewinding to June 3rd, for example, we find SaveThePostOffice.com reporting that the “Postal Service is now proposing to cut air transportation for the continental U.S. to about 12 percent of First Class volumes, and perhaps eventually to end it altogether.”

That sounds bad on the face of it. Why do it? “The agency says shifting from air to surface modes of transport would improve net income by $175 million a year and avoid dependence on air carriers, which can sometimes be unpredictable in meeting USPS time frames.”

But, a reasonable person might sputter, the Postal Service has no choice but to use planes, if it’s going to meet current service standards of three-day delivery to the contiguous 48 states….

Yes, that’s true. So, to solve that little problem, “the Postal Service has proposed downgrading service standards. Instead of two or three days, the new standard will be two-to-five days. The Postal Service says that it will be able to meet these lower standards more consistently, so mail delivery, while slower, will be more ‘reliable’ and ‘predictable.’”

Ah, we see: this plan was cribbed from the old “The Beatings Will Continue Until Morale Improves” handbook.

The nation’s favorite agency, which boasts a 91 percent approval rating, is being driven into the ditch by a Postmaster General who just happens to have owned a competing business in the private sector.

First he gave away money to politicians—maybe legally, maybe not—and then he was given a job that probably pays less that what he’s used to getting. Now he’s going to improve the agency by making the service worse.

No, there’s nothing suspicious in any of that.

ProPublica reported last week that those leftists were right all along: “a vast cache of IRS information showing how billionaires like Jeff Bezos, Elon Musk and Warren Buffett pay little in income tax compared to their massive wealth—sometimes, even nothing.”

Warren Buffet was being coy when he said he paid a lower tax rate than his secretary. ProPublica calculated his tax rate at one-tenth of one percent.

Jeff Bezos—the richest man on the planet, who is burning up billions so he can go joyriding in space—also pays taxes at a rate less than one percent.

Naturally, the IRS and the Justice Department got on this case right away. Unfortunately, their investigators did not go directly to GOP HQ and demand reparations for the overtaxed multitudes who have had to make up the shortfall over all these years.

No, they set out to find and punish whoever let the truth out.

In the absence of our hypothetical database, we’ve selected these examples of terrible public policy almost at random. Worse things are going on, we have no doubt.

It is easier, in a way, to report on catastrophic climate change than a criminally dysfunctional government. Nature may have her secrets, but she rarely dissembles.

As we go to press, a massive and intense heat dome is squatting over the Southwest, reaching as far north as Montana. It is expected to stay in place for a week. Health officials in Phoenix are warning that contact with asphalt pavement—which can reach 180° F at mid-day—may result in third-degree burns.

Researchers said in April that “the period from 2000 to 2018 was the driest 19-year span [in that region] since the late 1500s and the second driest since 800.” What’s more, it could continue for decades. And, says the lead author of the study, “We know that this drought has been encouraged by the global warming process.”

This drought is sure to make this year’s fire season worse. We reached out to an expert for insight, but our phone line to Hell had melted.

From fire, to ice: the Pine Island Glacier—the stopper keeping half a million cubic miles of Antarctic ice from melting in the Amundsen Sea—could be gone in a decade, glaciologist Bethan Davies said last Friday. An optimistic, though, she said “the future is still open to change.”

Fortunately, some legislators are also open to change. Rep. Louie Gohmert [R-Texas] recently asked if, to mitigate climate change, there might be “anything that the National Forest Service or BLM (Bureau of Land Management) can do to change the course of the moon’s orbit or the Earth’s orbit around the sun?”

Any such plan, though, would have to get past Senate Majority Leader Mitch McConnell, who seems to think Joe Biden is only 3/5ths of a President.

* Charles Fort (1874 – 1932) was an American researcher and author who compiled four volumes of anomalous phenomena such as frogs and fish falling from the sky, ball lightning, and spontaneous human combustion.