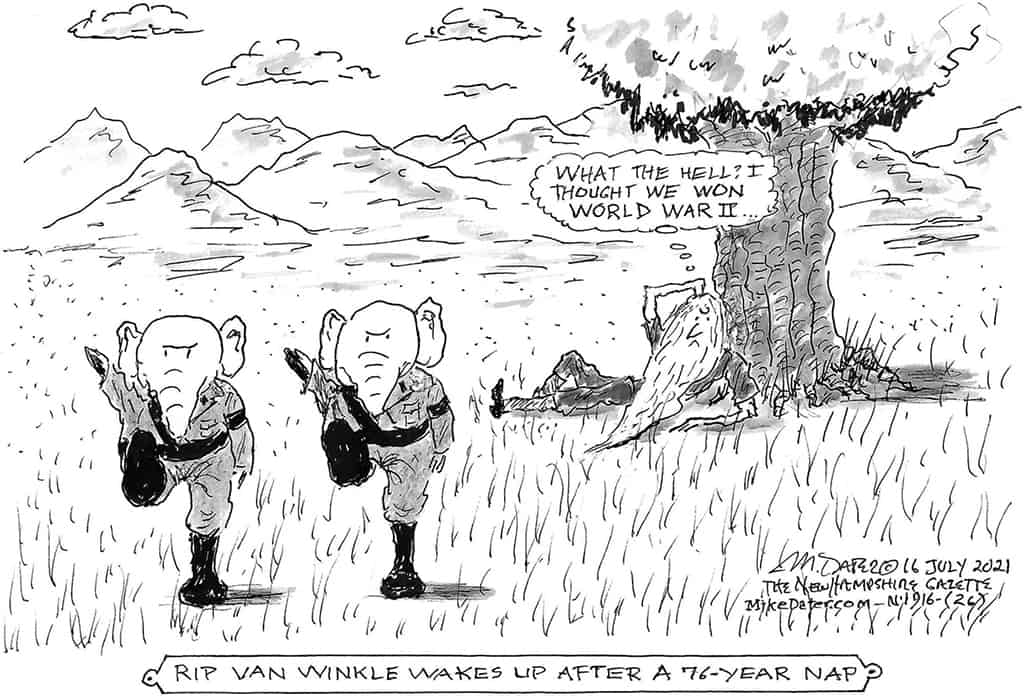 The American Conservative Union (ACU) boasts of being “the nation’s oldest conservative grassroots organization.” * Born in December, 1964—one month after, and in response to, Barry Goldwater’s epic electoral humiliation—the ACU is now 56.

People used to say that’s “old enough to know better.” Now that folk wisdom has been supplanted by a line of movie dialogue: “stupid is as stupid does.”

In ’64, the ACU’s conservative bona fides were above reproach. Among its founders was William F. Buckley, Jr., who famously wrote, introducing his magazine National Review in 1955, that it “stands athwart history, yelling Stop.” A more succinct definition of conservatism has yet to be written; a more accurate one would have to include the intent to reverse direction.

The ACU’s founders proclaimed that its “view of world affairs” was “substantially at variance with that taken by Mr. Robert Welch in his most publicized writing. Under the circumstances, the leadership of the ACU will be wholly distinct from that of the John Birch Society.”

Even gun-toting, cat-shooting William Loeb, paleo-conservative owner of the Union Leader, called Welch a “bloody nut.” Times have changed, though. Welch would have fit right in at CPAC’s most recent annual event.

“Wait just a minute,” sputters an indignant reader. “That annual event was back in February. We’re used to well-seasoned news in this rag, but this is getting ridiculous.”

It is indeed ridiculous, dear reader, we can’t argue with that. And CPAC did hold an annual conference in February, in Orlando—where the stage was in the shape of a neo-Nazi symbol, and attendees paid homage to a golden effigy.

Apparently, though, CPAC now holds annual events whenever Chairman Matt Schlapp gets the urge. It’s like those 100-year floods, which seem to come every year now. This time the shindig was held in Dallas. In lieu of neo-Nazi symbolism, the stage bore a subtle resemblance to a penis.

In a 2024 Presidential nomination straw poll, 70 percent of the attendees said they would vote to give the former guy another term. Given the audience, we’re surprised he didn’t do better. Still, that’s not a bad outcome for a guy who used mob violence in an attempt to overthrow the government. Treason is still treason, isn’t it?

Mike Pence didn’t do as well in the poll as his former running mate. Perhaps that’s because, in his role as Vice President, he certified Joe Biden’s electoral victory. Still, getting 0 percent must have stung.

At least he had plenty of company. Nine other Party bigwigs also placed in the zero digits; half a dozen could claim a whopping one percent.

Florida Governor Ron DeSantis came in second with 21 percent. If you want to break out of the pack, maybe being rabid helps.

One has to wonder how much farther this can go. Alex Berenson, a former New York Times reporter turned anti-vaccine huckster, told the crowd, “the government was hoping that they could sort of sucker 90 percent of the population into getting vaccinated, and it isn’t happening.” In response, the crowd clapped and cheered.

As CPAC was getting underway, Newsmax’s Rob Schmitt laid out the philosophical underpinnings of this position: “[O]bviously, I’m not a doctor. But I’ve always thought about vaccines, and I always think about just nature, and the way everything works. And I feel like a vaccination in a weird way is just generally kind of going against nature. …maybe there’s just an ebb and flow to life where something’s supposed to wipe out a certain amount of people, and that’s just kind of the way evolution goes. Vaccines kind of stand in the way of that.”

This is a free country. Everyone should have the right to join a death cult, if that’s what they really want. Something about suicide by contagious disease just doesn’t seem kosher, though. Johns Hopkins announced on Monday that the daily rate of covid infections in the U.S. has doubled in the past two weeks. The rate of infections is rising in 48 states, including New Hampshire.

We suppose that there’s reason to hope nature will wipe out the un-vaccinated first. If so, it had better hurry. Some freelance genius down in Dallas was handing out cards with a seven-point plan to “Restore Donald J. Trump In Days, Not Years.”

In and of itself this “plan” is probably no cause for alarm. Here’s Step One: “Pull back the curtain on the horror show that is today’s ‘Democrat Party.’ Watch Nancy Pelosi melt, like the Wicked Witch of the West.” Oh, heaven forfend—we’re quaking in our jackboots!

The imaginary sequence of implausible events laid out by this small-time grifter—who, oddly enough, solicits donations by check through a PO Box in the People’s Republic of Somerville, Taxachusetts—could serve, though, as the script for a real life remake of January 6th:

Make #45 Speaker of the House, empowering him to expose secret investigations which reveal he won in 2020 fair and square. Congress then would have no choice but to impeach Biden and Harris: Bingo!

It’s madness, of course, and can thus be dismissed…just like in 2016.

Writing in the Daily Beast recently, David Rothkopf stuck his neck out by asking, “Why are a third of us such gullible rubes?” He answered his own question with this truth: “virtually all of us on the planet—[are] brought up to believe howling absurdities, ridiculous impossibilities, and insupportable malarkey from our very first moments on Earth.”

Nick Carmody, who professes to have a Masters in Psychology, has been tweeting prolifically about the motivations of Rothkopf’s gullible rubes. He argues that “an addiction model may actually explain tribalism, confirmation bias, and even conspiracy theories/QAnon.”

Every time a right wing rage junkie’s subjective beliefs get confirmed by a wingnut authority figure, their brains reward them with a hit of dopamine.

In our considered opinion, Rothkopf and Carmody are both correct. But maybe we’re just gullible too.

* An earlier version of the ACU’s tagline had to be revised. Its original wording was “the nation’s original conservative organization.” That effectively tossed the Federalist Party—political home of the authors of the little read but much revered Federalist Papers—into the dustbin of history.