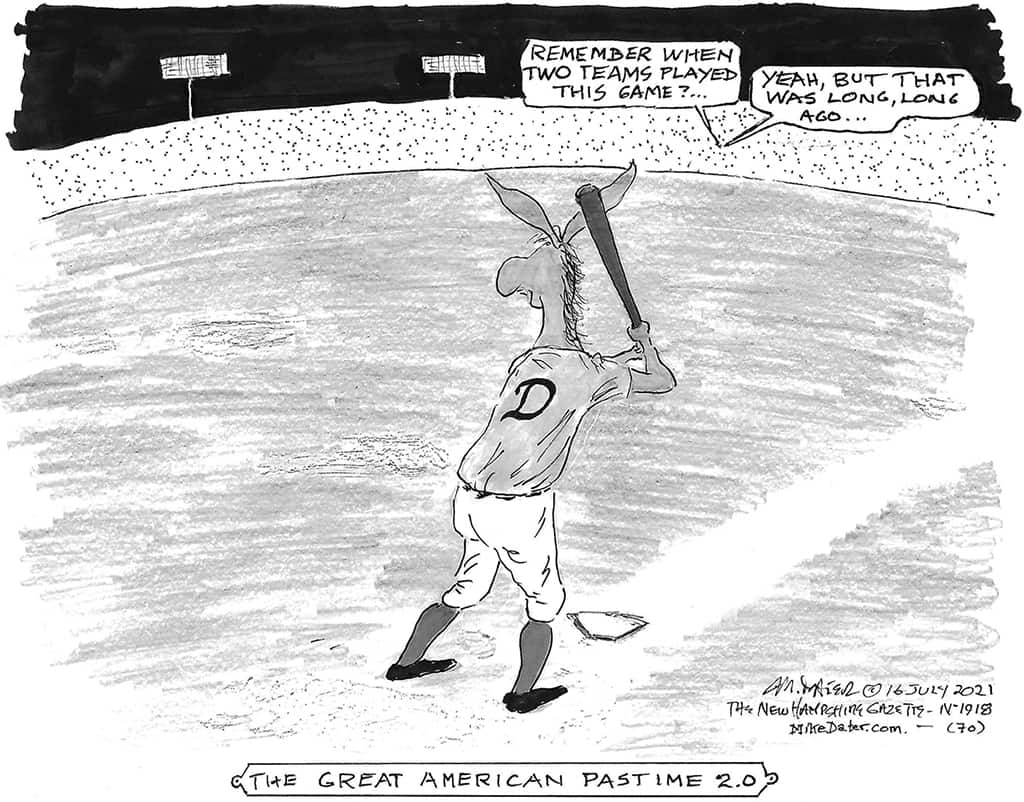 The Fourth of July weekend started early in Los Angeles this year. On Wednesday, June 30th, the L.A. Police Department blew up two blocks in the middle of Historic South Central.

Unfortunately, this was not a controlled fireworks display, intended to entertain the local residents and thereby create lasting bonds of amity and goodwill. It was more like the opposite of that.

Seventeen people were hurt in the 7:30 p.m. blast; none had life-threatening injuries. Fifty residents were displaced from their homes for a week.

What’s truly strange about this story is that it could have been a whole lot worse.

Apparently responding to a tip, patrol officers went to the 700 block of East 27th Street. Amid the modest one- and two-story homes, crowded onto tiny lots, they found a pile of fireworks stacked eight or ten feet high in a back yard. They estimated the weight of explosives to be about two tons.

Speaking at a press conference, Michael Moore—the L.A. Police Chief, not the film-maker—said nearly all of that material was safely hauled off for storage elsewhere, in a day-long operation using three box trucks and a 53-foot trailer. The damage, Moore said, was caused by forty improvised explosives the size of a soda can, and another 200 similar but smaller devices, with a combined weight of less than ten pounds.

Los Angeles Magazine, quoting a complaint filed by the U.S. District Attorney, reported that Arturo Ceja III had “purchased the fireworks from a dealer known as ‘Area 51’ in Pahrump, Nevada, where they are legally sold.

“The complaint also states that it was an LAPD bomb squad supervisor who made the determination that ‘some of the homemade fireworks and improvised explosives were not safe to transport due to risk of detonation in a densely populated area and therefore would be destroyed on scene using a total containment vessel [TCV].’ The complaint says that ‘LAPD bomb technicians told residents in the area to either evacuate or stay indoors while the fireworks were destroyed in the TCV.”

Chief Moore said “this vessel should have been able to safely dispose of that material.” Instead, the 500-pound lid of the TCV was found three or four blocks from the center of the blast.

“There [are] tons of speculators coming already, trying to buy our properties,” Martha Sanchez told the local NPR affiliate. Sanchez is the Secretary of the South Central Neighborhood Council.

“We receive at least three or four calls every day asking us to sell our properties. If they condemn those properties, they’re going to displace more poor people that have no idea how to pay their rent. That’s unbelievable.”

Or business as usual.

On July 1st, the Boy Scouts of America agreed to pay $850 million to settle 60,000 cases of child sex abuse. Fifteen days later, we’d wager that hardly anyone even remembers that headline. Well, the survivors, of course. But then, they didn’t need the headline, did they?

That is a staggering sum of money—until you divide it by the number of victims. How American can you get? Compensate a person for a lifetime of nightmares by giving them enough cash to buy a used pickup truck.

Still, that’s better than the $1,800-a-pop ’Nam vets got in the Agent Orange settlement, even adjusted for inflation.

Here are a few other stories likely forgotten:

On Friday the 2nd, the Gulf of Mexico caught fire. We hope Randy Newman’s working on that….

Saturday, the 3rd, after a foot of rain fell in 48 hours, a huge mudslide in Japan carried away 19 people.

That same day but closer to home—just fifty miles south of here—Mass. cops had a standoff on I-95, with an armed group of about a dozen camo-wearing Black men calling themselves Rise of the Moors.

Meanwhile in Florida, authorities demolished the standing remnant of collapsed condo building due to fears that Hurricane Elsa might knock it down, thereby complicating the task of searching for survivors in the rubble of the part of the building that had collapsed earlier.

The big story, though—one less likely to be forgotten, because it’s not going to end—follows….

Hundreds of North Americans—and perhaps many more yet to be tallied—have died of heat-related illness over the past week after a mind-boggling heat wave struck the U.S. Pacific Northwest and far southwest Canada. It’s virtually certain to be the deadliest weather event on record for the region. The unprecedented death toll is the result of a heat onslaught more intense by some measures than anything in global records, yet very much in line with the expected impacts of a human-warmed climate.

The intense heat flash-dried the rugged, forested landscape, and wildfires mushroomed across the area on Wednesday, June 30. By evening, the entire town of Lytton was under mandatory evacuation orders, and Mayor Jan Polderman told CBC News that “the whole town is on fire.” Most homes in Lytton have been destroyed, according to provincial authorities. …

Never in the century-plus history of world weather observation have so many all-time heat records fallen by such a large margin than in the past week’s historic heat wave in western North America. The only heat wave that close is the great Dust Bowl heat wave of July, 1936 in the U.S. Midwest and south-central Canada. But even that cannot compare to what happened in the Northwest U.S. and western Canada over the past week.

“This is the most anomalous regional extreme heat event to occur anywhere on Earth since temperature records began. Nothing can compare,” said weather historian Christopher Burt, author of the book Extreme Weather.

Pointing to Lytton, Canada, he added, “There has never been a national heat record in a country with an extensive period of record and a multitude of observation sites that was beaten by 7°F to 8°F.”

According to Herrera, more all-time heat records have been broken by at least 5°C (9°F) in the past week’s heat wave than in the previous 84-plus years of world weather recordkeeping, going back to July 1936. It’s worth noting that the record North American heat of the 1930s, including 1936, was largely connected to the Dust Bowl, in which the effects of a multiyear drought were amplified by over-plowed, denuded soil across the Great Plains—an example of human-induced climate change itself, albeit temporary.

Preliminary data from NOAA’s U.S. Records website shows that 55 U.S. stations had the highest temperatures in their history in the week ending June 28th. More than 400 daily record highs were set. Over the past year, the nation has experienced about 38,000 daily record highs versus about 18,500 record lows, consistent with the 2:1 ratio of hot to cold records set in recent years. …

Bob Henson is a meteorologist and journalist based in Boulder, Colorado. Jeff Masters, Ph.D., worked as a hurricane scientist with the NOAA Hurricane Hunters from 1986-1990. Yale Climate Connections is an initiative of the Yale Center for Environmental Communication (YCEC), directed by Dr. Anthony Leiserowitz of the Yale School of the Environment, Yale University. It aims to help citizens and institutions understand how the changing climate is already affecting our lives.

Perusing Twitter, as one does, we came across this alarming message from Alex Kaplan, aka @AlKapDC:

“We now know of a 7th QAnon-connected incumbent state legislator currently serving, this one in New Hampshire. The others are in Arizona, Maryland, Florida, Tennessee, Washington State, & Connecticut. (h/t @ehananoki).” [Emphasis added.]

What makes Kaplan think Representative Terry [Belknap 5] is part of a cult which believes, according to Wikipedia, in “a discredited far-right conspiracy theory alleging that a cabal of Satanic, cannibalistic pedophiles run a global child sex trafficking ring and conspired against former President of the United States Donald Trump during his term in office”?

The Facebook post shown below, dated November 3, 2020, in which Terry included this cryptic string of characters—“WWG1WGA”—followed by a winking emoji. Wikipedia the All-Knowing explains that the acronym stands for “Where We Go One, We Go All.” QAnon cultists lifted the phrase from the 1996 movie White Squall.

A cult that lifts its catch phrases from a Hollywood movie—you can’t get any more all-American than that. Our mobsters have been mimicking Hollywood actors since the 1930s.

Not wishing to suggest that Rep. Terry believes in a cabal of Satanic, cannibalistic pedophiles running a global child sex trafficking ring without giving him a chance to repudiate his own post on Facebook, we sent him this email Tuesday:

“VOTE today. VOTE like YOUR life and those you love depend upon it. VOTE, so that you will ever be able to say that you were not AWOL, hiding or not caring enough!

“What is the significance of the winking emoji which follows that acronym?”

Having weathered more metaphorical storms than whole newspaper chains of more recent vintage, we knew to expect, when we returned to print, that we would meet some unknown challenges. One of them, as things have turned out, was the mailing of papers to subscribers.

On the 18th, that worker was on vacation, but a co-worker improvised successfully.

From there things went downhill. We visited the Post Office on June 25th, an off Friday, and were advised that we should not expect to find anyone behind the counter trained to accept and process a bulk mailing.

Fearing that our July 2nd paper might be delayed, we took the brute force route. After applying a First Class “Forever” stamps to every outgoing issue, we brought the papers to Kittery, Maine—because what the hell, it’s a lot closer. Let’s just say, employing a little industrial-strength understatement here, that the results were sub-par. A reader in the Philadelphia area didn’t get his copy until the 10th.

After a cordial conversation with Portsmouth’s Acting Postmaster Amanda Snow, however, we feel we are back on track. This paper is going out by way of Heritage Avenue.

Portsmouth residents who have not voted in the past four years will be removed from the voter rolls by the City as required by state law, unless you re-register by August 1, 2021.

You can register or re-register at the City Clerk’s office during regular office hours at City Hall:

The Portsmouth Board of Registrars will also host two special registration sessions at City Hall:

To register or re-register, you’ll need to:

If you don’t have proof, sign an attesting affidavit.