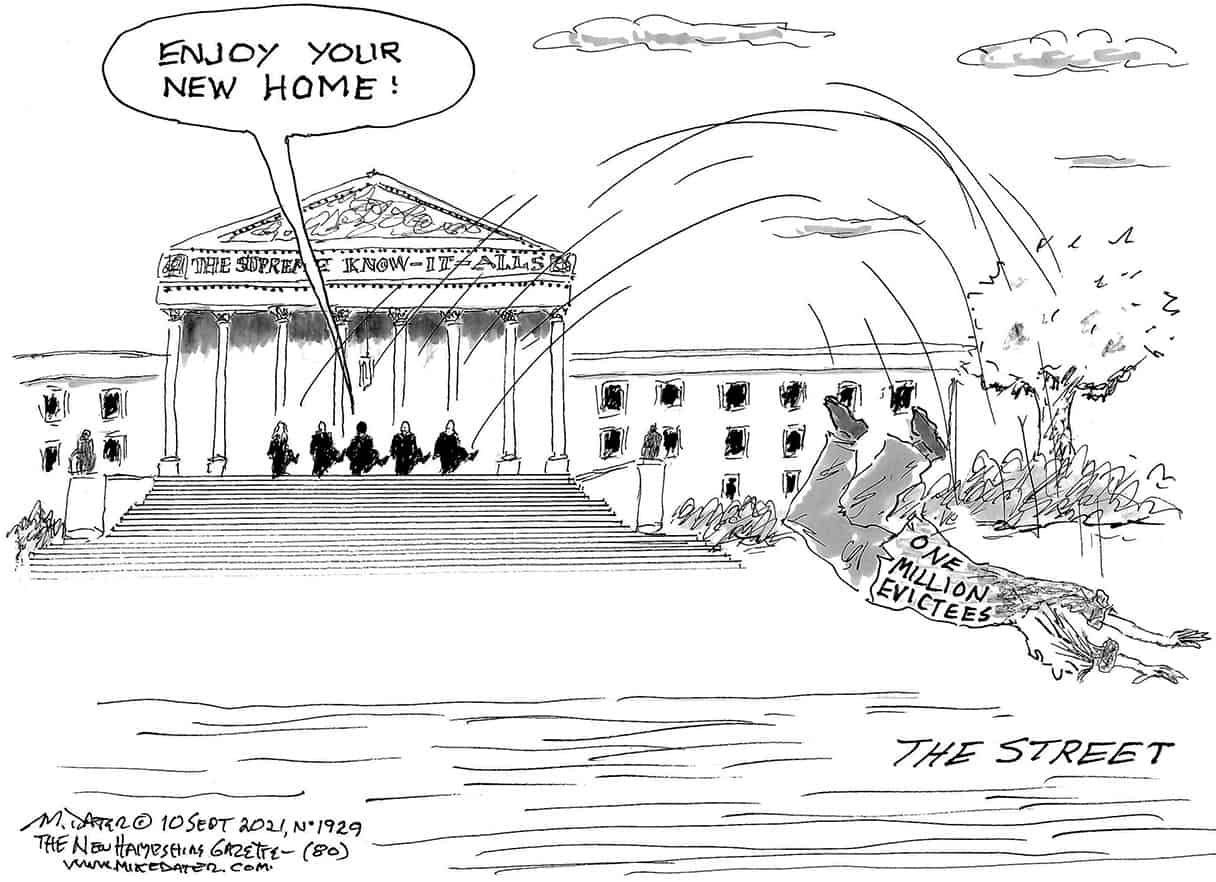 “Be kind,” someone* once wrote, “Everyone you meet is carrying a heavy burden.”

Could anyone possibly object to such a sentiment? Viewing it from a religious perspective—as is so fashionable these days—it would seem to pass muster right across the board, from Abrahamic to Zoroastrian.

It would be impractical and probably unwise to pass a law mandating kindness. Surely, though, that quality jibes with the spirit of our laws. Without kindness, how could we ever expect to succeed in our “pursuit of happiness”?

It seems reasonable to presume, then, that at the very least, our nation’s most eminent jurists have some nodding acquaintance with the principle in question.

Nevertheless, the Supreme Court has ruled: cruelty is the best policy.

The Centers for Disease Control [CDC] takes a somewhat narrower view. It just wants to fulfill its mandate to protect the public’s health. †

Last year many renters and homeowners, unable to work with the economy shut down, faced a difficult choice: eat or live indoors?

Working from the theory that living on the sidewalk during a pandemic is bad for the health of individuals and the nation, the CDC issued an eviction moratorium. To cover all that unpaid rent, Congress allocated $46.5 billion.

That’s a substantial amount of money, to be sure. For some perspective, though, it only represents about one percent of the taxpayer-funded $4.6 trillion total cost of the 2008 bank bailout, according to Neil Barofsky, Special United States Treasury Department Inspector General who oversaw the Troubled Assets Relief Program. ‡

Late last month the Court and the [CDC] met on a great battle-field, testing whether the Court’s bracing, Spartan approach would prevail over the CDC’s mandate.

We got our answer as this past fortnight began. Gird your loins, you Spartans! Perhaps the Court decided to kill the poor with kindness. We cannot say what’s in their hearts—or if they even have such organs. All we know for sure is that it’s definitely killing the poor.

Throwing millions of people out of their homes is a big responsibility. Don’t fret too much about the Court, though. It’s got help.

Despite mid-terms being a mere fourteen months away, Congress took time out from campaign fund-raising lately to consider a vexing problem facing our earnest, hard-working job creators.

According to prevailing economic theory—which, judging from its ubiquity on all profit-making “news” outlets, is surely an accurate reflection of reality—federal unemployment benefits have turned American workers into shiftless bums. Presumably this is particularly true of the pampered non-homeless among them.

“How,” the People’s House asked itself, during a fit of anthromorphism, “can our donors enjoy the fruits of their employees’ labors, if those lazy bastards won’t show up and work on demand?”

Accustomed to making what they love to call “the tough decisions,” the Members, having de-anthropomorphized, did what they do best, which is to say, nothing.

Well, they did go back to playing “Dialing for Dollars.” Those campaign coffers won’t fill themselves.

They did not, however, extend federal unemployment benefits. They expired on Monday.

So, happy Labor Day, all you lazy good-for-nothings!

You see, this austere regimen of exposure to the elements, combined with a marked reduction in caloric intake, will increase your employability—eventually.

Look for this effect to kick in just about the time all that money generated by forty years worth of tax cuts finally starts tricking down on your weather-beaten heads. In theory, anyway.

The People’s Policy Project [3P] took the radical step of actually looking at the data to see whether that theory about the pernicious effects of federal unemployment benefits held up under scrutiny.

By “monitoring the information trickling out about the effect of dramatically slashing unemployment benefits in 26 states,” it found that “employment did not grow faster (indeed it grew slower) in the 12 states that cut UI [unemployment insurance] benefits in early June.” It also found that “individuals who were on UI in April became a lot poorer in states where UI was cut but only very negligibly increased their employment.”

To give Congress and the Court—and the White House, which made no effort to extend these benefits—the benefit of the doubt, perhaps they’re too dim to understand any of this. On the other hand, perhaps they do but they just don’t care.

Who will save the people, then?

It will have to be the people.

“The real war is a war on class. It’s about how much green you have in your pocket. In this country, you can unfortunately literally get away with murder if you have enough political background behind you. You are innocent until proven poor.”

“Hard times are coming, when we’ll be wanting the voices of writers who can see alternatives to how we live now, can see through our fear-stricken society and its obsessive technologies to other ways of being, and even imagine real grounds for hope. We’ll need writers who can remember freedom—poets, visionaries—realists of a larger reality.” …

“We live in capitalism, its power seems inescapable—but then, so did the divine right of kings. Any human power can be resisted and changed by human beings. Resistance and change often begin in art. Very often in our art, the art of words.”

* Quote Investigator is our authority of choice for tracking down the origins of such dicta. At quoteinvestigator.com/2010/06/29/be-kind/, this one is attributed to John Watson, a Scottish cleric who wrote under the name Ian Maclaren. Typically, the quote’s final phrase is “…fighting a hard battle.” Eschewing the militaristic metaphor, we prefer the more straightforward alternative.

† Would it act more aggressively if it were called “The Grand Exalted Centers for Disease Eradication and Expungement”?