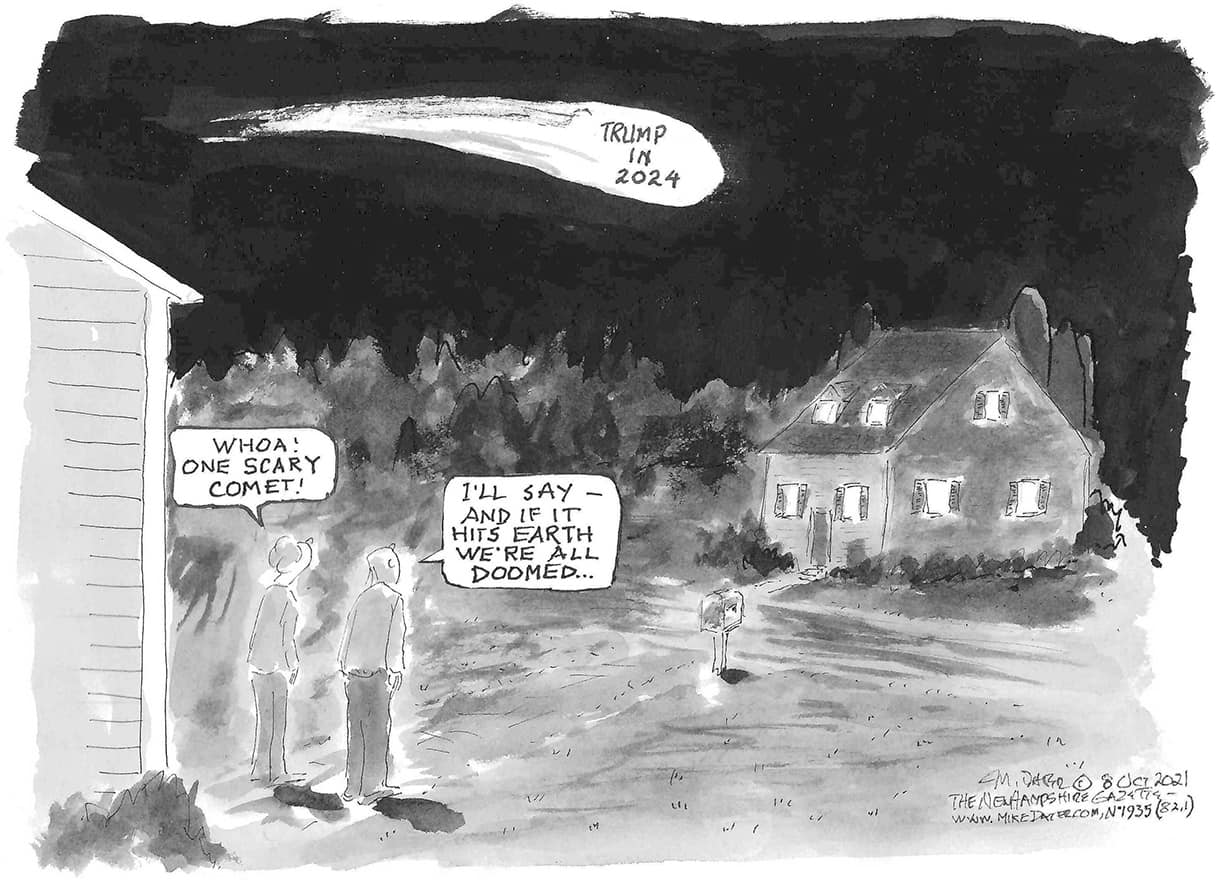 The former guy is saying that he might run for President again.

There it is: one simple declarative statement that all by itself could cause another pandemic. It wouldn’t be the viral sort; we’re talking depression this time, and probably with two variants: personal and financial.

During the prior maladministration, the nation spent four years—years we could ill afford to lose—sliding backwards rapidly on a host of issues like the climate, racism, economic inequity, voter suppression…we’ll stop there lest we start making tasteless jokes about self-destruction. Losing four more years would be unthinkable.

Our first instinct is not to believe him. After all, paraphrasing Mary McCarthy on Lillian Hellman, every word he says is a lie, including “and” and “the.” Most likely it’s just aother scam, a ploy for attention and another chance to fleece the rubes. If that’s the case, we just fell into the trap. It’s an occupational hazard.

Then there’s his appalling diet. Common sense tells us that Mickey D cheeseburgers and a dozen Diet Cokes a day will catch up with you eventually. Throw in his high cholesterol, and it hardly seems possible that he’ll be alive on Inauguration Day, 2025, at the age of 78.

Thirty seconds spent conferring with The Google disabused us of that hopeful notion.

After examining all publicly known data on the health of the person in question—the poster child for questionability—a team of gerontologists published a paper last fall which concluded he is likely to be a “super ager.”

That is a person who’s been blessed by nature with “a higher than average probability of surviving the next four years relative to other men.” This band of boffins put that probability at 90.3 percent, compared to 86.2 percent for normal mortals. Not much difference, in our view—and not much grounds for optimism, either way.

Hopes dashed, we consoled ourselves with the knowledge that yet again, folk wisdom has proven to be true: only the good die young.

A trained psychologist—or even a random person plucked from the sidewalk—could probably tell from the text above that we’re desperately trying to find some reason to think that the catastrophe we are contemplating here cannot, will not happen. Lately, though, whether we’re scanning the news, consulting the Magic 8-Ball™, or examining sheep entrails, all the signs are dire.

If you think that reference to sheep entrails was distasteful, you may want to skip these next few paragraphs.

Why, one might ask, did the latter PAC need replacing? Because it had been run by New Hampshire’s own Corey Lewandowski.

Lewandowski is now said to be “pursuing other endeavors”—as a consequence of having aggressively pursued, on September 26th, a woman actually named Trashelle Odom, who is the wife of Boise, Idaho contractor and Republican campaign donor John Odom.

Britain’s Daily Mail reported on October 2nd that Trashelle Odom filed a police report alleging that, at a charity event in Las Vegas, Lewandowski had drunkenly and persistently groped her, stalked her, bragged about his genitalia, and told her that on two occasions, once when he was 10, he had stabbed people to death.

If the events alleged by Trashelle Odom took place—and we would take her word before Lewandowski’s—this harrowing event will at least have served a worthwhile sociological purpose: the campaign says that it fired Lewandowski, thus demonstrating that it does, in fact, have some ethical boundaries.

Lewandowski, however, denies that he’s been removed. And, as one of just two board members of MAGA Action, this time he actually may be telling the truth. Hence the need for the new PAC, Make America Great Again, Again!

One co-chair of this repetitiously redundant endeavor is Pam Bondi, the former Florida Attorney General. This appointment seems inevitable, considering that in 2013, Bondi deep-sixed 22 fraud complaints against Trump University four days after her PAC received a $25,000 contribution from the former guy’s foundation.

Pardon us for a moment, now, as we back up the Irony Dump Truck [beep beep beep]. The other co-chair is Kimberly Guilfoyle, former-guy Junior’s girl friend, who was fired from Fox News for sexual harassment.

Having wrung nearly all the fun that we could out of this, let’s get truly depressing.

Rolling Stone’s Ryan Bort took a serious look at the “will he, won’t he?” question Tuesday. His piece leaves little doubt that #44 plans to add #46 to his unspeakable name.

“As long as Trump doesn’t explicitly announce he’s running for president,” Bort writes, “he can essentially raise as much money as he wants from whomever he wants, and spend it unfettered by the restrictions or transparency requirements imposed upon actual candidates.”

Running for president without announcing he’s a candidate allows him to bounce around the country like a demented ping pong ball, preening for the cameras, yukking it up in front of his fans, and pocketing whatever loot he can extract from them.

In other words, the next 37 months threaten to be indistinguishable from his first term.

Desperately clinging to the fragile hope that it can’t happen here—again—again—readers might rightly point out that supporters of TFG are actually in the minority.

It is our duty as designated party-poopers to remind them that for the last thirty or forty years—as Democratic shepherds debated how best to compromise with wolves—the Republican Party has been lavishly funding its most devious minds as they furiously worked to assure the irrelevance of such trivialities.

Dare we hope, at this last ditch, for a deus ex machina? For the sake of argument, and to give our more bloodthirsty readers a consolation prize, let’s imagine for a moment that the former guy does die before the election. At this point in our precipitous political devolution, who’s to say Republicans wouldn’t pull a “Weekend at Bernie’s” and nominate his corpse?